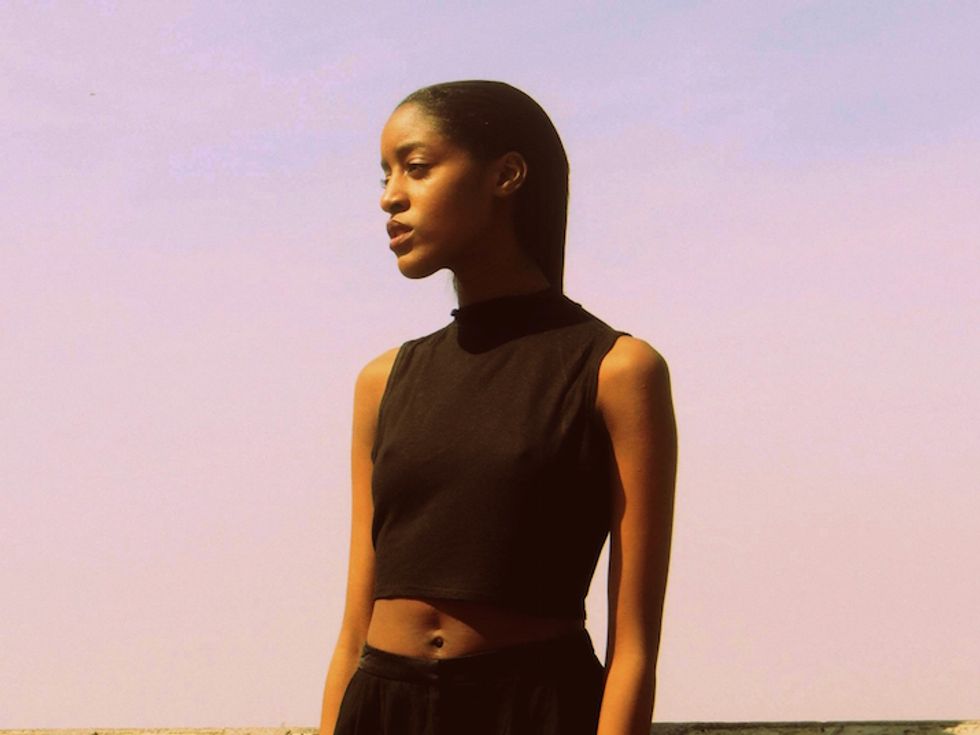 Lizbet Sempa talks about her Ugandan heritage and the classical piano-meets-modern sound of her new single "All The Things" and upcoming EP.

Lizbet Sempa just turned 20. Born in London to Ugandan parents, the songwriter—who’s been playing piano since she was 7-years-old—recently released her new single “All The Things” after a two year hiatus.

Through her debut tracks “Epiphany” and “Mistakes,” which showcased the singer’s towering and delicate voice over a somber piano progression, Lizbet reached over one million followers on her Soundcloud account seemingly overnight. A co-sign and performance alongside Ghostpoet at 18 further placed her on the UK map.

We caught up with the talented songwriter to discuss the new direction of her sound with “All The Things” and her Ugandan heritage.

Okayafrica: How did you get started playing music? What music inspires you?

Lizbet Sempa: Well, Dilla did actually change my life, he was the one that made me want to make music in the first place. At the time I was 16, listening to beatmakers like Doja Cat, MNDSGN, KNXWLEDGE and writing to their beats. The music I was making wasn't great, some of it was cringeworthy, and I wasn't using the piano at all.

Then I went through a bit of heartbreak and just sat at the piano and wrote “Mistakes.” That's when I realised I could compose on the piano, and it felt so much more natural than singing over beats. I felt so restricted before. After that I just made it a habit of composing on the piano and it just went on from there.

I'm a huge huge fan of Georgia Anne Muldrow, she's one of my number one idols. Everything about her: she's fierce, sassy and her music is so inspiring. She's massively underrated but she keeps making the music regardless of that. I'm a big fan of Erykah Badu—"Other Side of the Game" is my favourite track. I'm listening to a lot of Hiatus Kaiyote and Taylor McFerrin as well.

You took a two year break since the release of “Mistakes” and “Epiphany” on Soundcloud, what have you been up to?

Well I've been at acting school full-time, but other than that I've been working on my sound. Going to lots of producing and writing sessions and building up material. I've got lots of music, I've just been experimenting with different sounds and finding myself to be honest.

I was really young when I released those first songs, I was 16. It's so necessary to have that time to mature. Vocally and mentally I've changed a lot since those first songs. There was industry pressure as some people were questioning if I was still making music but I just had to do my thing in my own time. It was nerve-wracking releasing “All The Things” after the hiatus, especially because it's such a different sound to my older stuff. I think people were expecting me to come out with a more classical track.

How would you describe the sound that you're exploring at the moment?

I feel like my music is classical versus modern, a real mixture of my influences. I tend to mix in jazz elements in terms of the sound and timing of the piano. I'd say my music is relevant and easy for people relate to. I'm not trying to make music to confuse people or hide what I'm talking about, I want to be really clear and straightforward with my sound. There are pop elements in there, but jazz influences me too.

How do you feel about being compared to Nina Simone by magazines like Clash Music?

Yeah, so many people have said that. I think it's beautiful but sometimes I think, “In what way are we similar?” She's one of the greatest, it's obviously a great compliment, but I don't really hear the similarities. Songs like “Mississippi Goddam” are political and social and I'm not really making music on that level. A lot of people have also compared me to Laura Mvula, but again our music is differently composed and we're only similar because we are black and play the piano, so I don't really see the musical similarity.

You’re of Ugandan descent. How, if at all, does your heritage influence your identity and music?

So my parents are both from Kampala, and go back quite a lot—they just came back from a trip there actually. I've never been, though, I'm in school full-time at the moment so I just haven't had the chance to, but I definitely want to go. I've got some land there, so I'm definitely going to go and build a school at some point.

My heritage is very important to me, it doesn't necessarily come out in the music. I love my food though, I love matoke— it’s a bit like plantain, but less sweet. Oh and an interesting fact, my grandfather Israel Magembe Wamala was part of Kampala City Six in the 50s, a big jazz band that was pretty successful. When I found that out, it made me understand my desire to make music.

You initially connected with UK artist Ghostpoet through social media and have now gained over a million followers on Soundcloud. What is your relationship to social media at the moment?

I think it's really useful. I mean, I was listening to a lot of Ghostpoet when I was younger, so I tweeted him my song “Epiphany,” and he tweeted back. We then followed each other and a year later, he hit me up asking for my management contact—next thing I know I'm supporting him at Hackney Empire! It was such a great opportunity, and it's lovely that he's a fan of the new song too.

The one million followers on Soundcloud is a bit nuts, but basically through a few different links, I was picked as 'Soundcloud Of The Day', which meant my page was shared all over the world on their Tumblr, Twitter, etc.

I came home from college and just had thousands of emails, and 5,000 new followers—it just grew from there. But at the same time I'm not too tuned in to music on Soundcloud anymore, it’s a bit of an "I'll follow you if you follow me game," so I'm a bit detached from it. I like exploring on Youtube and just getting recommendations from friends. I'm also aware of the danger of the Soundcloud music scene sounding too similar, and I want to develop a clear sound that is mine.

Are there any young artists around that we should know about? What are your plans for 2016?

In terms of what's next, I'm hoping to release another song before the end of this year, and then release my EP early 2016. It will probably be called Built for Love, and once that’s out I'll start gigging, sharing the music with live audiences, and just showcasing my work.

Based in London, Remi Graves is a writer/music geek in search of the perfect sound. Check out her monthly radio show The Two Step and follow her on Twitter for updates.