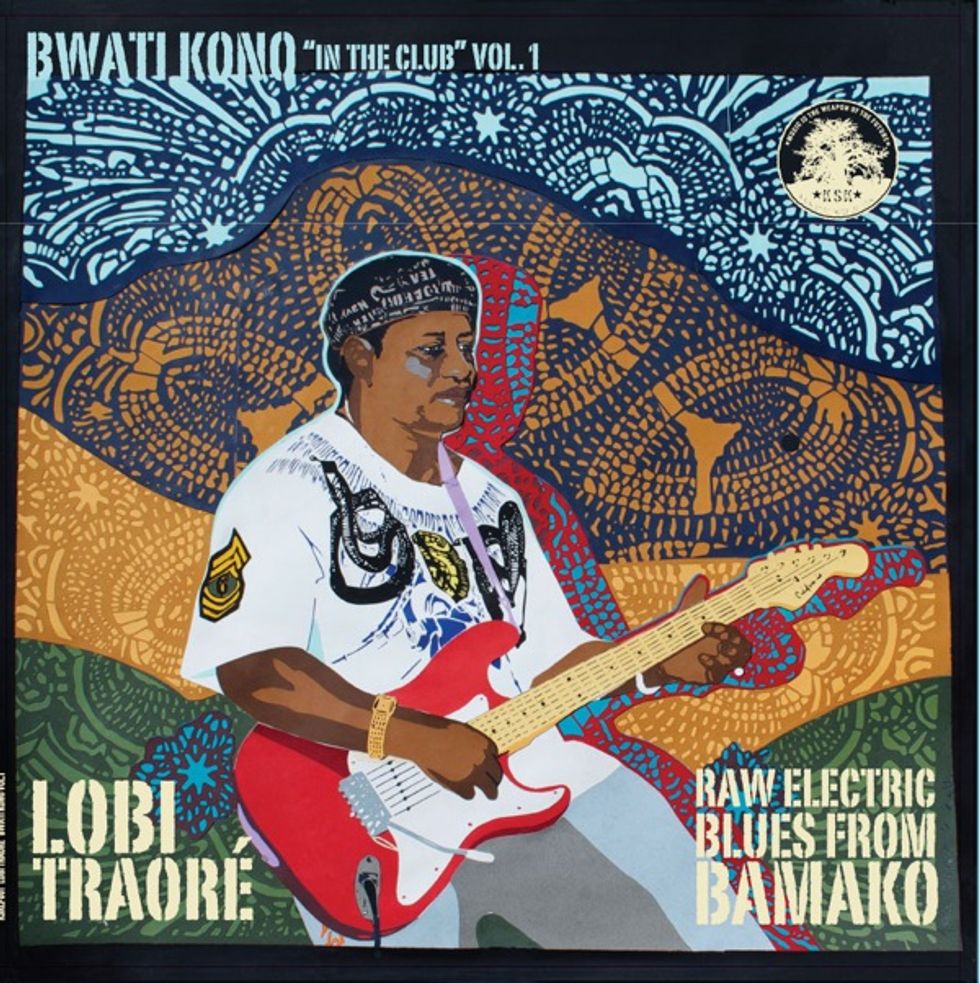 Lobi Traoré Bwati Kono vinyl release is a firm reminder that Traoré is a champion of the celebrated Ali Farka Touré sound.

Malian blues guitar is so entrenched to the benchmark of Ali Farka Touré’s work that any release in the style must admit some comparison to the legend. While Touré’s shadow weighs heavy on the Malian sound, Malian blues artists often welcome, if not invite, it. The upcoming Lobi Traorévinyl release Bwati Kono is a firm reminder that Traoré is a champion of the celebrated Touré sound.

Lobi Traoré and Ali Farka Touré previously nurtured a working relationship in which Touré produced three Traoré albums in the 90s, shaping the sound of the younger artist. Bwati Kono, recorded in 2010 before Traoré’s death, shows off his penchant for raw and gritty improvisational jamming. Unlike some of Traoré’s previous work, Bwati Kono features a largely unadulterated sound emanating from his guitar; distortion and feedback are stylistically central but don’t play the part of cover-up production tactics. The guitar playing is steady-handed and reveals a willingness, if not a need, to explore the open possibilities of modal blues. As a result, the improvisation doesn't wail as much as weave. Traoré continually seeks out logical riffs which bear repetition, when he does stumble upon a riff he’s not ready to pass up he continues to play with its openness for several bars before moving on. The ultimate effect is one of propulsion in which Traoré’s playing is restless and driving.

It's no surprise that Lobi Traoré’s guitar is the lead voice in Bwati Kono but he also sings throughout. And while he's a fine singer it's not his voice that will attract listeners. The backing band carries Traoré completely, two percussionists and a bassist offer the tightness that allows the guitarist an ultimate freedom. While the spotlight is on Traoré, the bass is certainly responsible for much of the head-nod inducement here. The percussion section (each player heard separately on either channel) operates expectedly on different rhythms that weave together closely and leave little space in between. It's not until Traoré’s guitar drops out (often after an introductory rhythm guitar riff) that the listener realizes how responsible he is for defining the melodic memory of each track. Though his one-man-show status is only a function of the accompanying band’s steadfast supporting role.

Ultimately Bwani Kono showcases loosely-formed Malian blues-rock jamming in its essence: it's the perfect format for Traoré’s improvisation. And while the guitarist certainly has chops his style is less braggadocious, instead reaching for what’s next melodically — he’s not one to hang on notes. Record-heads can hope for a nice loud pressing of the six-track Bwati Kono which will be released on vinyl late October via Kanaga System Krush with artwork by Californian paper artist Tahiti Pehrson. It will be the first of two volumes culled from live sets performed in Bamako; these live recordings will certainly help offer a more nuanced legacy of another great and recently lost Malian guitarist.