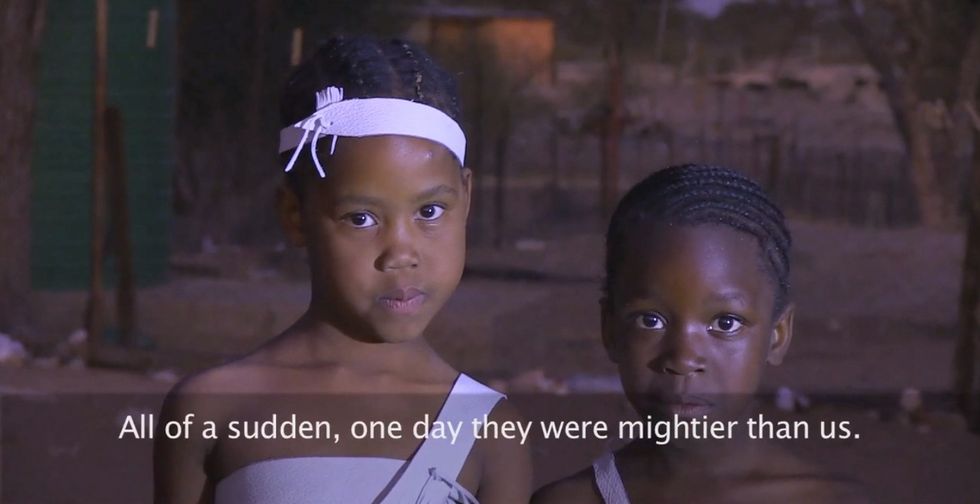 A new documentary takes viewers on a spiritual journey to save an indigenous South African language spoken only by three people.

It’s a race against death. A contest against time. N!uu, a 25,000-year-old San language faces extinction. Three surviving elders, all sisters, the youngest being 80 years old, are the remaining speakers of the language in South Africa’s Northern Cape province, among the #Khomani San community.

“It’s unthinkable that this language is about to die. Something has to be done,” Helena Steenkamp, a young San woman and the central character of the documentary film, Lost Tongue, says.

Set to premier at New York’s Socially Relevant Film Festival on March 17, Lost Tongue is a cultural and spiritual journey to raise consciousness about a language on the verge of extinction. In April, the film will open in about 100 cinemas across the U.S.

Directed by young filmmaker Davison Mudzingwa, and presented by South African-based Mvura Ya Afrika (MYA) Productions, the film is a call to save indigenous languages.

“This is a story of hope and revival of the ancient and endangered N!uu language of a marginalized indigenous #Khomani San people in the Kalahari,” Mudzingwa tells Okayafrica.

The San are the historic peoples of Southern Africa. Today most live in South Africa and neighbouring Botswana and Namibia. In modern South Africa, the San have largely been absorbed into the so-called “Coloured,” mixed-race or Griqua population. This absorption has led to a loss of culture and language, says Mudzingwa.

The Atlas of the World’s Languages in Danger, published by the United Nations Educational, Scientific and Cultural Organization (UNESCO), says languages are vehicles of cultures, collective memory and values: “They are an essential component of our identities, and a building block of our diversity and living heritage. Yet, about half of some 6,000 languages spoken today are in danger of disappearing.”

This is the quandary N!uu finds itself in.

Lost Tongue is the collaborative vision of Mudzingwa and three friends. Themba Vilakazi, one of South Africa’s foremost cinematographic talents, shot the film. It was funded by MYA Productions and non-profit outfit Entrepreneurship Africa. Francis Yannicq Hweshe of South Africa and U.S.-based MeSun Barnett are producers working to bring the picture to the world’s screen.

In the film, a young San lady, Helena Steenkamp, frantically tries to save her ancient language N!uu from extinction.

She teams up with one of three remaining speakers to learn the language and culture. Through this journey, the film explores the marginalisation of the San people and cultural genocide they have gone through.

“Born into a world that does not reflect who they are, their names betray their identity,” Mudzingwa says.

“It’s a sad state of affairs,” he adds. “They are socialised into a lifestyle that is not theirs, they speak Afrikaans, a language that was forced on them, and when they die, they are buried in a manner that is foreign to them.”

Mudzingwa says he was inspired to make Lost Tongue after directing the 2012 short film, Bush Trail, which premiered at the Tri-continental International Film Festival in Johannesburg.

“When we filmed Bush Trail in Kalahari in the #Khomani San community, it was funny yet sad, local people did not speak their language or follow their traditional culture,” Mudzingwa says.

"From this observation, another storyline was born, we began to investigate and a new, exciting and surprising journey for Lost Tongue."

“Language is an important human rights issue,” Barnett says. “We hope through this cultural project the global audiences will get to see the remnants of a discriminatory history still alive today.”

He tell us that it’s a tall order, but that is what drives them to share this authentic story to both uninitiated, and a more knowledgeable audience public.

The film has made the producers realize that they can do something in the #Khomani San community, where about 1,000 people reside and an unknown number of their tribe scattered to reside elsewhere around the Kalahari.

Hweshe says there are plans to start the Lost Tongue Legacy Project in 2017, a social impact program where they aim to form partners for the construction of a multimedia center at the heart  of the #Khomani San community.

“The centre will become a symbol of hope for the hopeless youth,” Hweshe tells Okayafrica. "The youth will tell their own unique stories as professionals through film and photography."

Hweshe says multimedia classes will be held with assistance of professionals who will come together from all over the world to work with local staff to teach students the skills to succeed and provide the proper support needed.

“In addition to other facilities, we would want the centre to have a facility for the recording of the language as well as a library and recreational sports,” he says.

Munyaradzi Makoni is a freelance journalist based in Cape Town, but for him, anywhere in Africa is home. He writes about education, science, the environment, health, agriculture and social life.