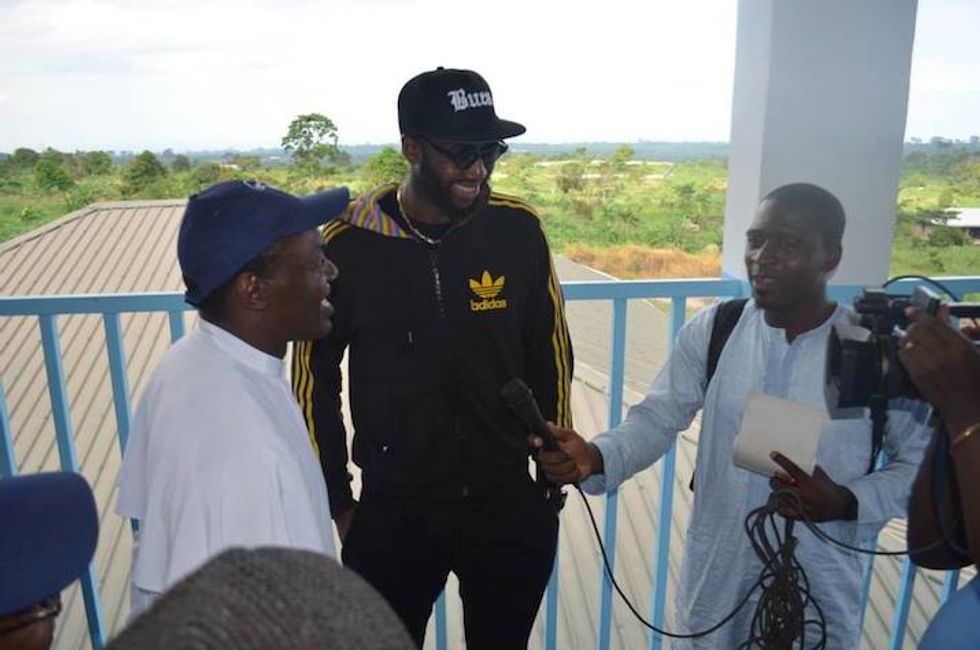 NBA star Luc Mbah a Moute discusses his recent trip home to Cameroon and his involvement in the Tackle Ebola campaign.

All photos courtesy of Luc Mbah a Moute Basketball Camp

Philadelphia 76ers power forward Luc Mbah a Moute spent some time in Cameroon last month, where the Yaounde-born NBA star was conducting pre-selection at the basketball camp he founded in his hometown. We spoke with Mbah a Moute over email about his work cultivating a fresh crop of Cameroonian basketball players and his involvement in the Tackle Ebola coalition, for which he recently appeared in the #ZeroCases PSA for alongside Congolese Oklahoma City Thunder forward Serge Ibaka.

Luc Mbah a Moute: It's not as great as it used to be when I was growing up. Back then there were more places to play and the competition was very high. Unfortunately, the kids now have fewer playgrounds and infrastructure, and way more distractions. So something needs to be done to build more courts so that kids will have access to them, spend more time practicing, and thus raise the level of play.

Okayafrica: Why was starting a basketball camp in Cameroon important to you?

Luc Mbah a Moute: After I was drafted to the NBA, it was important for me to do something for basketball in Cameroon. The simplest and most impactful way I thought of back then was to start a real basketball camp — nothing like that had ever been done in Cameroon before. I wanted to identify and help the talented young players of Cameroon get an opportunity to use basketball to impact their lives like it did for mine.

Okayafrica: Have any professional or collegiate athletes come out of the camp?

Luc Mbah a Moute: So far we've had 6 college players and 1 NBA player come out of the camp.

Okayafrica: Why did you want to get involved in the fight to stop Ebola?

Luc Mbah a Moute: I got involved to stop Ebola because the horrible disease has devastated the lives of too many Africans. As an athletic ambassador to Africa, I want to do everything I can to keep other Africans safe and healthy. The world needs to remember that the fight against Ebola is still going on. We're yet to have reached zero cases of Ebola in Sierra Leone and Guinea. Ebola anywhere is Ebola everywhere. We all must remain vigilant, and everyone has a part to play. I’m just doing what I can.

Okayafrica: What is Tackle Ebola currently doing to stop the outbreak?

Luc Mbah a Moute: I partnered with Africa United to make sure that Africans know what to do to get to zero cases of Ebola and build a healthier Africa. In the United States, Tackle Ebola is mobilizing public, corporate, humanitarian and political support for getting to zero cases of Ebola in West Africa. I joined Tackle Ebola because I see that Americans also need to pay attention to what’s going on in the affected countries.