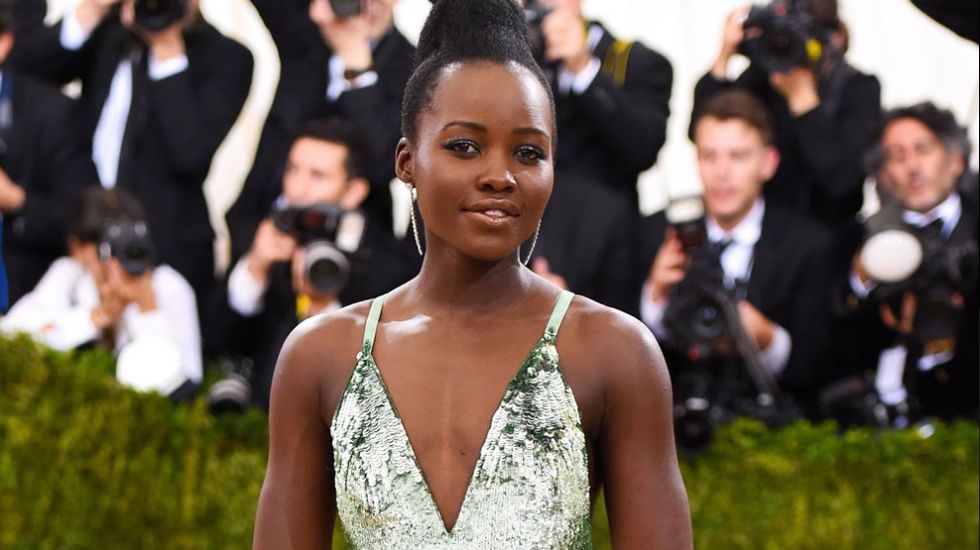 "Now that we are speaking, let us never shut up about this kind of thing." Nyong'o writes in her New York Times op-ed.

Lupita Nyong'o is the latest actress to recount being sexually harassed by Hollywood producer Harvey Weinstein.

In an opinion piece published in the New York Times, entitled "Speaking Out About Harvey Weinstein," the Kenyan actress opens up about how she first met the producer while a student at the Yale School of Drama. Given Weinstein's industry status, the young actress wanted to connect with him on a professional level, and she exchanged contacts with him in the hopes that he would consider her for a movie role.

Not long after, the producer invited her to dinner, and afterwards to his home where he asked to giver her a massage. Several other women have described a similar experience with the producer. She writes:

Harvey led me into a bedroom—his bedroom—and announced that he wanted to give me a massage. I thought he was joking at first. He was not. For the first time since I met him, I felt unsafe. I panicked a little and thought quickly to offer to give him one instead: It would allow me to be in control physically, to know exactly where his hands were at all times.

He proceeded to remove his pants despite her protests that it was making her obviously uncomfortable.

This was not the only time the producer made sexual advances towards her either. On another occasion, Nyong'o recalls Weinstein threatening her after she turned down his advances. "He told me not to be so naïve. If I wanted to be an actress, then I had to be willing to do this sort of thing," wrote Nyong'o.

In the past few weeks, dozens of actresses have come out with allegations against the producer—their stories span decades. Earlier this week, Buzzfeed reported that Weinstein dropped British-Nigerian actress Sophie Okonedo from a 1997 film, because he didn't consider her "fuckable."

Nyong'o's heard the stories of countless others whom Weinstein had assaulted, and felt compelled to speak out and "regain that power."

"I have felt such a flare of rage that the experience I recount below was not a unique incident with me, but rather part of a sinister pattern of behavior," said Nyong'o. "I speak up to make certain that this is not the kind of misconduct that deserves a second chance. I speak up to contribute to the end of the conspiracy of silence."

Many fans and fellow stars are giving her support on social media:

Thank you @Lupita_Nyongo for your beautiful honesty & your stunning insight. And most of all thank you for your courage. And love. Always.
— kerry washington (@kerrywashington) October 20, 2017