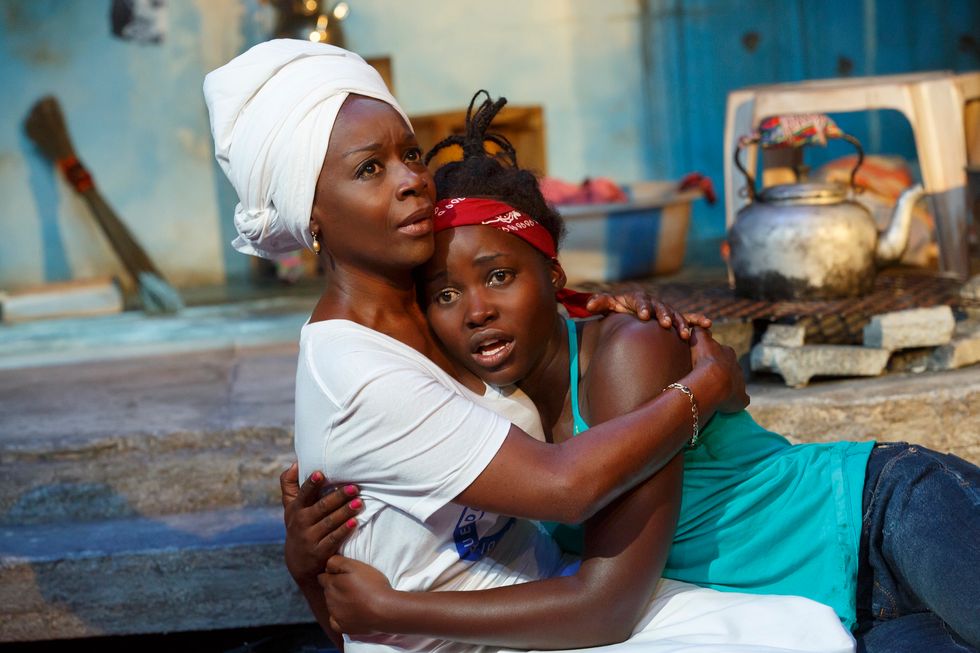 In an essay, titled Why I Chose a “Small Play” over the Big Screen, the Academy Award-winning actress reflects on her career choices, or rather, why she shouldn’t have to defend her choices. The letter is inspired by a question she was asked during a recent round of press for her Tony-nominated turn in the Broadway production of Danai Gurira’s history-making story of five women during the Liberian civil war, Eclipsed.

“Why would such a big star choose to do such a small play?”

For Nyong'o the question initially seemed silly. “I’m an actress; why wouldn’t I want to be in an incredible, gorgeous, meaty piece about the complicated choices of women during wartime?” she writes. But she soon realized it went deeper than that.

“I think as women, as women of color, as black women, too often we hear about what we ‘need to do’” she writes.

She continues that as an actress, feeling connected to a fully realized, complex character is what she looks for first, adding that as an African woman, she’s wary of the trap of telling a single story.

Eclipsed offered Nyong’o the rare opportunity to play a fully rendered African woman. “So often women of color are relegated to playing simple tropes: the sidekick, the best friend, the noble savage, or the clown. We are confined to being a simple and symbolic peripheral character — one who doesn’t have her own journey or emotional landscape.”

When picking a project, it’s an author’s intention, the particular story being told and the emotional journey of its characters that take precedence over genre for Nyong'o. “In Eclipsed, Danai has blessed us with five such journeys,” the actress writes. “None of these women are tropes. They are battling real demons, living with difficult decisions in an all-too-real world stricken with the trauma of war. It’s an incredible gift to play one of them, and it’s liberating to share this view into women’s experiences with a Broadway audience.”

Nyong’o’s recently decided to participate more fully in the development of roles she picks in the future due in part to “the conversation the industry has been having about women and racial and cultural representation.”

She concludes by stating:

I look at this play — it’s the first play on Broadway to feature an all-woman cast, playwright, and director, and the fact that we are all women of African descent makes it even more incredible — and I feel profound gratitude to be a part of it. I am proud of my decision to take the time to sit with myself and not get caught up in what others want for me. I look at the beautiful faces of my co-stars: Pascale Armand, Zainab Jah, Saycon Sengbloh, and Akosua Busia, and I see the light and love of my current artistic family, a sisterhood of African women who go onstage nightly and pour everything we have into this story. I look out at the diverse audiences who come to full houses and experience our performances, and feel proud of being a part of sharing this important story with the world. I see a work of incredible power that is transforming lives by daring to offer women of color fully rendered narratives, and I feel so lucky to be a part of it.

I look at this play and see nothing about it that is “small.”

The inimitable Lupita Nyong'o wrote an essay about why she chose to do "Eclipsed," a "small play" on Broadway, instead of a Hollywood movie. A play that was just nominated for 6 Tony awards – one of those for Lupita's performance, of course! Read now, link in bio. #LennyLetter Illustration by Elise Peterson