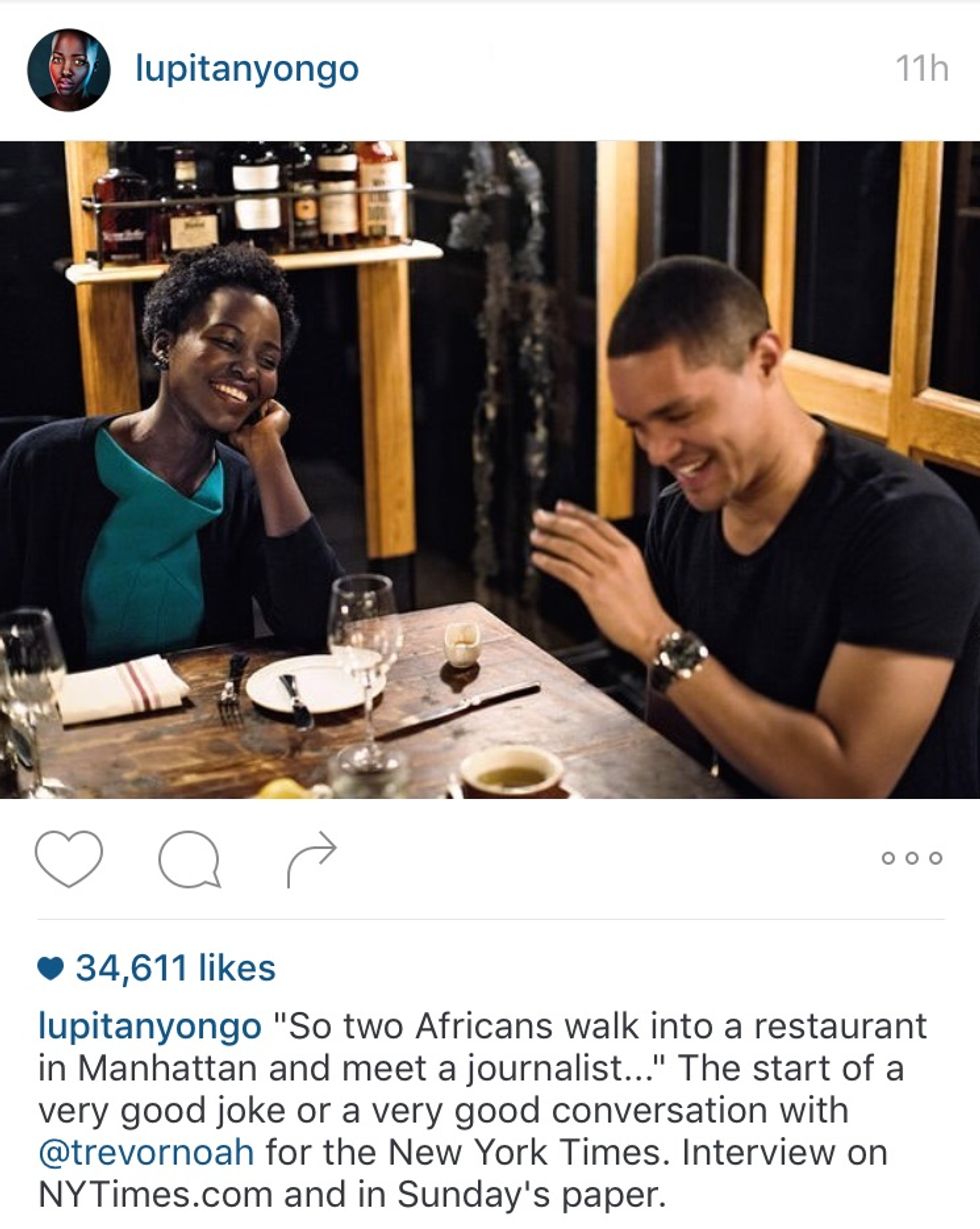 Here’s what happened when Lupita Nyong’o and Trevor Noah sat down in conversation, together, with The New York Times.

When Lupita Nyong’o and Trevor Noah sat down for brunch in New York City, the conversation was, not surprisingly, brilliant. The South African Daily Show host and the Kenyan Oscar winner and recent Broadway star, both 32, chatted about everything from #OscarsSoWhite to the importance of bringing diverse faces to New York theater and late night TV, and childhoods in South Africa and Kenya–all over beet salads and a cheese omelette (Nyong’o’s choice) and a bagel with smoked salmon (Noah’s). New York Times advice columnist Philip Galanes was there too. The meal was under the auspices of a NYT interview. Below are six things we learned from their chat.

1. Nyong’o was determined to see five African women tell their own stories on stage.

According to the actress, there was talk of bringing Eclipsed to New York since 2009, when she was an understudy in the play at Yale:

But Lynn Nottage’s play “Ruined” was on then. And there was a feeling that there wasn’t room for two plays about Africa and war to exist at the same time.

I had never seen five African women on stage telling their story — ever! It’s so specific that it captures the universal. I was obstinate about doing it. And when the “12 Years” whirlwind hit, people started to approach me. And the Public Theater took me up on doing it.

2. The lengths Noah went to to bring diversity to The Daily Show.

Asked if he was working on diversity on The Daily Show, Noah responded:

When it comes to diversifying, I had never realized how ingrained people’s mentality can be. It’s not even conscious. When I was looking for new people to try on the show, the network sent out all their tentacles. And people sent in audition tapes. And 95 percent of them were white and male. I was like: Does nobody else want to be a part of this show? Does nobody else even want a job?

I said, “I want more diversity.” And they said, “But this is what we’re getting.” So I said, “Then I will go out and look for it in the street.”

So I went to all the young comedians I knew — black, Hispanic, female, whatever — and I said, “Are you interested?” And they all said: “Are you crazy? Of course, I’m interested.” So I asked, “Why didn’t you audition?” And they said, “We didn’t know about it.” But they told me they’d sent it out to all the agents and managers. And they all went: “Oh, that’s where you made the mistake. We can’t get agents or managers.” We can say we want diversity, but there’s this little roadblock that no one tells you about.

3. Noah and Nyong’o agree on “the irony" of #OscarsSoWhite.

But you know the irony of #OscarsSoWhite? If you were talking with two white people, they would get to discuss their achievements, their hopes and dreams, maybe a passion project. But we can’t not talk about the Oscars, or we get, “Don’t you care?” But if we do, we get, “Is that all you talk about?” It’s a vicious cycle.

I feel like clapping and singing right now! You said that just right. It cuts down on human experience.

4. Growing up in Kenya, Nyong’o and her family were in a precarious political position.

The actress was born in Mexico while her family was in political exile. They moved back to Kenya when she was a baby. On whether or not there was still a lingering fear, Nyong’o said:

My parents shielded us from a lot. It would be dangerous for us to know things because then we could be a target. So they raised us with a semblance of normalcy. There were times when we were under house arrest and couldn’t go to school. I knew we were in a different situation than my friends.

Even when things were out of sorts, my mother ran the house like always. You were in that bathtub at 6; you were in bed at 7. I remember my father being gone for long stretches when he was detained without trial. But I was optimistic enough to hold onto my mother’s saying, “He’ll be back.” I wasn’t allowed to lean into it.

I wish I could rewrite “The Ugly Duckling.” Because after the ugly duckling becomes a swan, people go around dumping on the swan, saying, “Oh, you swan, you don’t know what it’s like to be an ugly duckling.”

Now they act like we’ve had it easy all our lives. I can’t help that my face fixed itself.

After mentioning that she was stood up at prom, Nyong’o added:

I was always confident, but I shed my tears. They told me I was too dark for TV. But I came to accept myself. And a lot of that had to do with Alek Wek, the way she was embraced by the modeling industry. Oprah telling her how beautiful she was. I was like, ‘What is going on here?’ It was very powerful. Something in my subconscious shifted. That’s why this conversation is so important — because it burns possibility into people’s minds.

I used to be teased and teased. They called me black mamba, awful names.

You know what I gained? Compliments never grow old. They’re delightful every time.