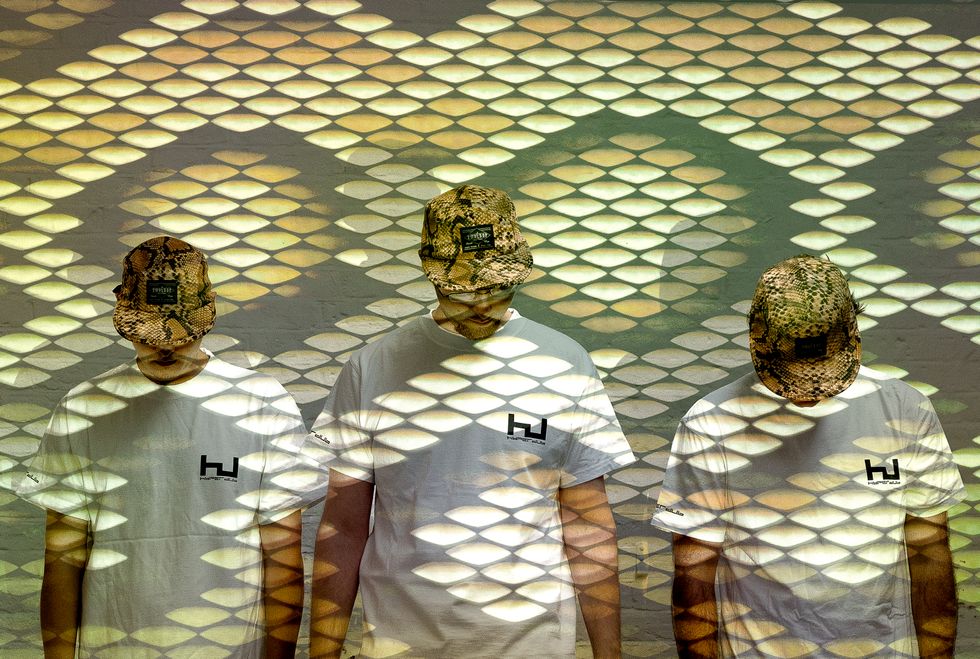 London production trio LV have been dropping a steady stream of SA-tinged, multi-layered gems on a number of UK underground labels, most notably electronic elite house Hyperdub. The producers are currently prepping the release of their sophomore full-length Sebenza, which promises to be a South African affair with plenty features from frequentcollaboratorOkmalumkoolkat (of Dirty Paraffin) as well as appearances by Spoek Mathambo and Ruffest. Stream the exclusive, unreleased track "Push It ft. Okmalumkoolkat" and read our interview with LV below. Sebenza LP is out September 4 via Hyperdub.

Tell us about your upcoming record Sebenza, you got a bunch of South African features on it.

Yes we do. Though it's not like we went out to find South African features or anything, this album is a result of ongoing collaborations with Spoek Mathambo, Okmalumkoolkat and Ruffest. It started with [group member] Gervase's trips back to South Africa where he met Spoek and Okmalumkoolkat and we've been making tunes with them since. The Ruffest guys came a bit little later after he met them at a gig in Cape Town on a later trip. It came to a point where we felt we had a collection of tunes that worked well together and Kode9 helped us to get them into shape and form the album. Then Manuel Zambrano made some amazing artwork to go with it and that's the album, Sebenza.

Why do you think your beats pair so well with SA rhyming? What are some of your influences when crafting them?

We've always liked making music with vocals, and obviously you try to make what you do compliment the vocalist, but it's not an exact science. Smiso, Spoek and the Ruffest guys all have their own distinctive ways and we love what they do, so there was definitely a desire to make them a focus of the music. We all have quite different tastes and influences but then obviously we crossover on some things too. Some of the SA music we heard over this album-making period definitely formed a part of those influences, but then there were also indirect links to other music. Spoek pretty-much tuned us into juke ages ago and Smiso is into all this mad Durban and Joburg music but he's also big on US rap and other stuff.

That probably depends on what kind of SA tunes you mean. But there isn't a particular SA scene, as far as we can tell. Lots of people are taking inspiration from SA music in different ways.

Tell us about this unreleased track we're premiering "Push It."

"Push It" is Okmalumkoolkat on a fierce one... Zulu, Compurar, Tony Montana, Future, Mfana vibes.

Any other African acts you plan or would like to work with in the future?

There's already more music with the vocalists from the album, including a track that we did with Das Kapital who is a producer from Cape Town. And there's a song we did with Spoek and Zaki Ibrahim, more news on that soon. There's also a new track with Spoek and Afrikan Boy that we did when they were both in London for the African Express festival.

We got a bunch of "Louis Vuitton" google results when searching your name. What's the story behind the name LV?

We thought Louis Vuitton could use a few more hits.