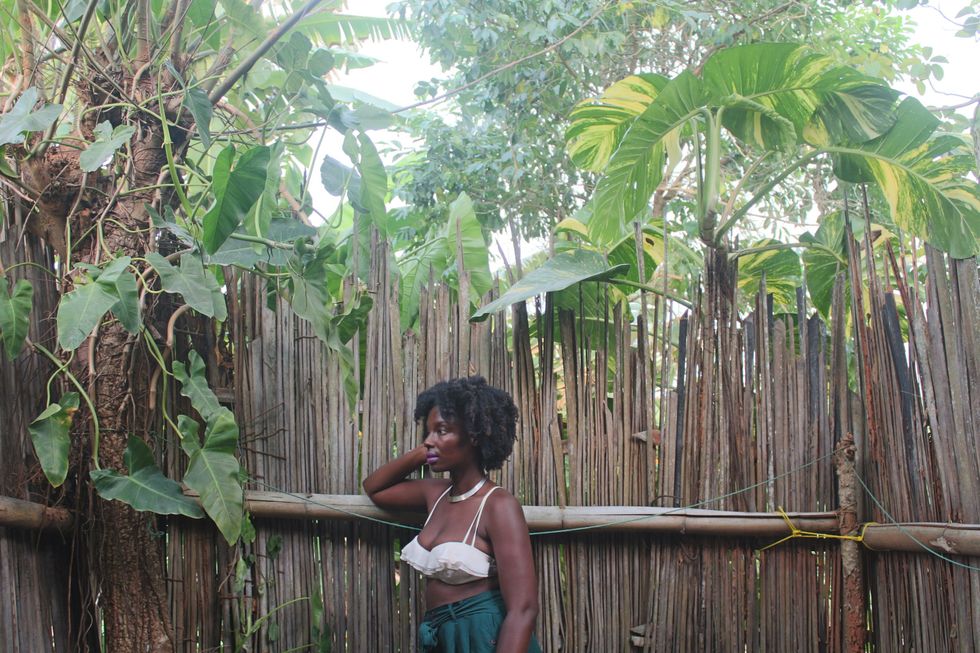 Okayafrica catches up with Maame Adjei on her new travel series, 'Girl Going Places' where she takes on Ghana for season one.

Sometimes the best adventures are in our backyard and Maame Adjeiknows this well. Adjei, an actress and producer best known for her work on An African City, hopes her new travel show, Girl Going Places, will dispel Africa’s “dark continent” narrative and highlight the continent’s natural beauty and dynamism. The first six episodes of the pilot season take viewers around Ghana to explore undervalued gems like the Likpe Caves and Ada. Future seasons will find Adjei exploring cities all across Africa’s 54 countries in an effort to make travel on the continent a more accessible experience.

Okayafrica caught up with the globetrotting Adjei to hear more about her adventures, and where this girl is going next.

Akinyi Ochieng for Okayafrica: Can you tell me about when and why you decided to move home to Ghana from Philadelphia?

Maame Adjei: It was very impulsive. In September 2012, I was in Ghana for a quick two-week vacation to celebrate the anniversary of my Grandmother’s death. Before I left, I felt this pull to move back—it was time to move home. I returned to Philadelphia, drafted my letter of resignation, shipped all my things, and by December 1 of that year, I was back in Ghana. My background is actually in healthcare finance, so that’s what I initially thought I’d do in Accra. For the first few months, I looked for jobs in that field, but I realized I was tired of pursuing a career that I wasn’t passionate about. I decided to take off 2013 and travel Ghana. When I had come for my grandmother’s funeral, it was my first time visiting my mother’s hometown and I loved it-the landscape and the people. Seeing outside Accra was a great experience, and I was eager to explore Ghana more.

Moving in such a short amount of time would be daunting to most people. Are you naturally adventurous? How did doing this show force you step out of your comfort zone?

I’m naturally a risk-taker, especially when it comes to just packing up and moving around. When I was 15, I decided to move from Ghana to England to live with my dad. When I was in London, I decided I wanted to move to Philadelphia for college despite not having any family or knowing anyone in that area. When it was time to move back to Ghana, I decided to just drop everything and do it.

The show definitely pushed me to be more adventurous. In the first episode, you’ll see me crawl down to hike inside Likpe Caves. Initially, I thought I was going to get there, park, cross the street and see the cave. If I had known I was going to go in, I might have been more hesitant, but once I arrived, there was no backing down.

Always being up for a challenge, being open to exploring—is that what it means to be a “girl going places” or is there more to it?

That’s certainly part of it. A “girl going places” is someone who has found something they’re passionate about and is pursuing it vigorously. Someone who is confident, fearless, and approaches life’s difficulties saying, “I can do this.”

Why did you decide to create the show and how do you see it as a movement?

I consider myself a real Ghana girl, Ashanti to the core and proud of it. But as I began to explore Ghana for myself, I realized how sad it was that I had never really explored my own country before. I hadn’t even been to Kumasi or seen Manhiya Palace [the seat of the Ashanti kingdom]. Many of my friends had never been outside of Accra.

When I started this project, I was really just documenting things for friends, people, and myself to show the world outside of Accra. As time moved on, I thought it would be great to share with more people, especially other Africans, and show that the beauty and history we look for elsewhere outside of Africa is right here under our noses.

You don’t have to go to Milan for a cultural experience. You don’t have to travel to Jamaica to get a beach vacation—you can go to Zanzibar. Africans have to be able to travel and learn about our own spaces before we venture elsewhere, and I don’t think we’ve done that enough, for many reasons.

One of the reasons which frequently comes up is cost. Getting from Nairobi to Dakar will cost you around $1200 while Nairobi to London is $600. Any advice for exploring the continent on a budget?

The cost of travel around the continent is ridiculous. It’s one of the largest deterrents to travel. Why pay all that money to go to Dakar when you’re not even sure what’s there when you can pay half the price and go to London where you know what to expect? London markets itself beautifully, and Dakar or Accra or Abidjan have to do the same.

So if you’re traveling the continent, make sure to get that bang for your buck. If I’m traveling from Ghana to South Africa, for example, that’s time to take advantage of the neighboring countries like Botswana or Namibia. Make your travel itinerary such that you can explore a region rather than just a country.

You mentioned the failure to market our gems. In Ghana, where you’re from and where season one is focused, what do you think the government is—or isn’t—doing to support growth in domestic and regional tourism?

There’s a tourism board and Ministry of Tourism, but what are they doing to market our country? In Jamaica, you know what to expect. When you think Jamaica, it’s “beauty,” “beaches,” and “vacation.” In Ghana, tourism revenue is huge, but I don’t know where it goes. There are few government-owned rest stops on the way from Accra to Kumasi—they’re all privately owned. There have to be greater efforts to provide structure to spaces and tourist sites to encourage people to visit places around the country.

One of the most basic areas that can be addressed is infrastructure—roads. Driving outside of Accra to reach the Volta Region in episode one took five hours (when it should have taken three) because the roads get really bad at a point. Government has to make it more accessible to travel within the country.

Are there any hidden travel gems in Ghana that you wish more people knew about?

My favorite place in the whole word is Cape Three Points. It’s about an hour and a half outside of Takoradi, which is about four hours drive from Accra. A few years ago, I’d say probably 90 percent of my peers had no idea about Cape Three Points, but now more people are learning about it. It’s so beautiful—a beach with a seemingly endless coastline and a gorgeous, old lighthouse that was built when it was used as a trading post. Cape Three Points is all about relaxation and untapped, natural beauty It’s what I imagine an island destination like St. Lucia is probably like —clear water, clean sand, palm trees.

What’s at the top of your Africa travel wish list?

Namibia. I keep hearing how beautiful and dynamic it is, so it has been at the top of my mind.