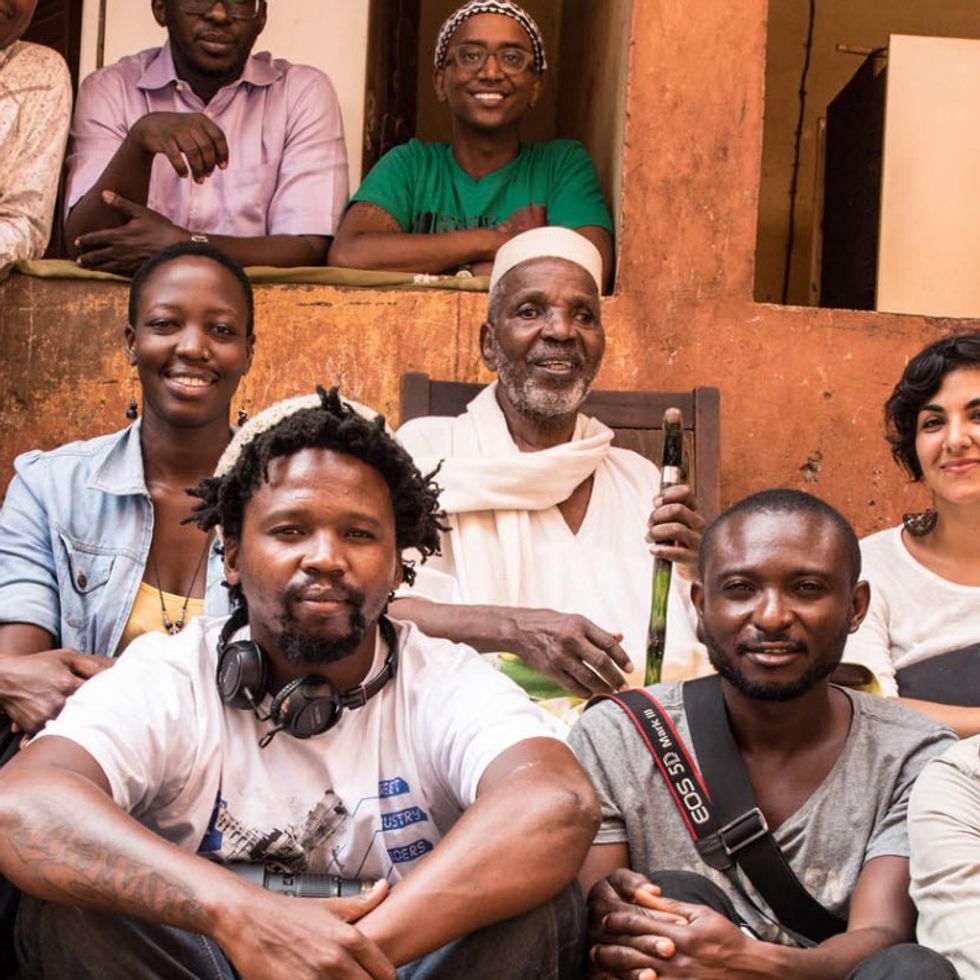 There is the man, and there is work by the man. Both facts occasionally coincide. In my case, it was during the 2014 Invisible Borders road trip when I met Malick Sidibé with other African artists. I saw him in his seventy-eighth year, when his eyesight had almost failed completely. I saw him in the house where his old cameras and negatives were housed.

I wrote about that encounter. When I learned of his death, I returned to my essay immediately as a matter of urgent consolation. The first thing I wanted to do was remember him as the man I saw two years before his death. Like his photographs of parties, I dare anyone to disprove that certain emotions cannot be compressed into an instant. For me, the sentiment is homage. I met him for an hour or less. I met him in a group. I met him while I listened. That is enough. My memory of his presence is on repeat.

A friend sent me a text. “I’m so sad about Malick Sidibé.” I felt that sadness too, a sorrow usually reserved for a death in the family. As my feelings alternated between gratitude and loss, I recalled that Jack Shainman Gallery was exhibiting his lesser-known work. I changed my day’s plans and hurried to see it.

There hadn’t been anytime I considered life as hurried in relation to his images. Pleasure always seemed in continuum. For instance, in the images of couples dancing in the Surprise Party series. Now, in his bodily absence, I saw that time, glimpsed from a certain state of mind, passes quickly. You see the fizzling joy of youth. You see the promise of the post-independence ‘60s return, in your gaze, undelivered. You see women and the men who desire them, or men and the women who desire them. You see motorcycles, hats, bracelets, sunglasses, starched boubous—all the ephemera that make you momentarily content.

Susan Vogel’s Malick Sidibé: Portrait of the Artist as a Portraitist (2006), produced in association with the Musée National du Mali, opens with Sidibé saying, “Without this work, what would I have done?” His statement contains many worlds. Such as a world of those like me who knew him after his work was done. Later in the film, he says, “Man has a desire to remain eternal on earth—how?” Since he was a photographer, there is a clear relationship his work has with infinite time. In its very essence a photograph is a generous record that outlives its maker. Now and always Malick Sidibé pitches forward.

I spent the day after seeing the exhibition browsing tribute photographs on Facebook. There were mostly photographs Sidibé had taken, the ones that made him famous. There was also several from his funeral: the crowd at his home, his body wrapped in a multi-colored shroud, placed on a stretcher, clerics and family members praying for his soul, men discussing logistics, a somber crowd sitting and waiting.

There was also a 2007 photograph uploaded by the Kenyan photographer Mimi Cherono Ng’ok, a tribute to the photographer’s toolkit: it depicted four rows of old cameras, mainly medium formats, taken by Ng’ok in Sidibé’s studio. All the tributes I read culminated in that. You needed no further evidence of his willingness to go afield, to tinker with monochromatic form, to experiment with light.

Writing this with the knowledge of his death, offering an encomium in a sea of many, I wonder about the fact that his photographs leave little room for anything else—except the recognition of a master photographer deserving praise. I do not mean his work is without difficulty. When I look, for instance, at the latter photographs of women with their back to the camera, in the series Vue de Dos, I am fascinated by a kind of reverse Olympia, by women who will not comply with a frontal gaze. So, then, I praise how Sidibé approached truth in and out of the studio. Truth was something social; truth was something wrestling with modernity.

In the short film by Vogel, screened in the Gallery as part of the exhibition, he says, “Photography is very social.” Only six minutes long, the film succeeds especially because of its brevity. His wit and humor was portrayed as culminating in essential wisdom. By now venerated, by now approaching the end of his life, you see him repeatedly bursting into merriment, laughing and causing laughter.

Sidibé at his core, I propose, was a philosopher of happiness. In one scene in Vogel’s film he ends a statement with “I don’t like sadness.” At the end of our meeting with him, he said, “I am very happy.” That he was content at the end comforts me, as it should comfort all who mourn. I believe his contentment is related to his work as a studio photographer who worked mainly in the working-class Bamako neighborhood of Bagadadji. The number of lives that entered his was incalculable. Like a doctor, his hand bore a memory of all the poses he orchestrated, the bodies whose grace he revealed.

The dead do not disappear. They are made to occupy infinite space. The extent of my gratitude is to return Sidibé’s question to him. Without your work Maestro, what would we have done?

Emmanuel Iduma is a writer and art critic. He writes about historical and contemporary Nigerian photographs for The Trans-African.