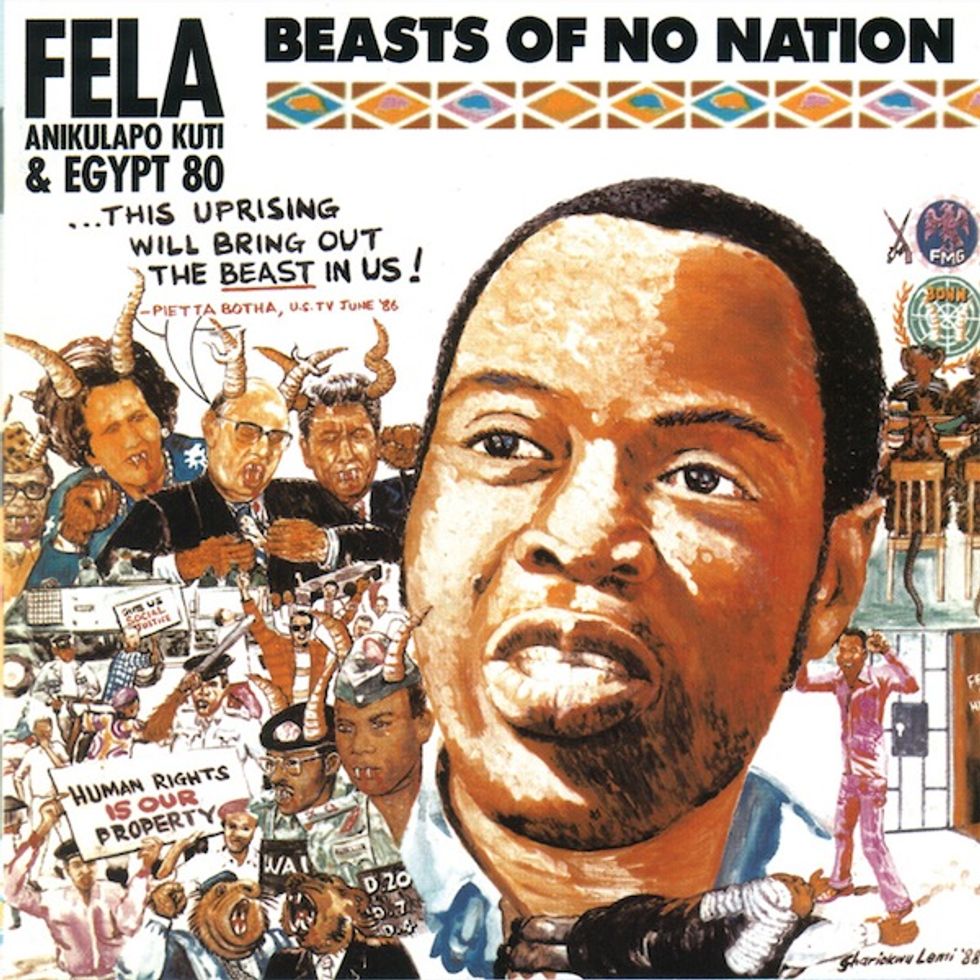 Early on Monday 8th April the UK’s first and only woman Prime Minister Margaret Thatcher died of a stroke, aged 87. Tributes rolled in: President Goodluck Jonathan called Thatcher "one of the greatest world leaders of our time" and counts himself and all Nigerians among those "whose lives were positively touched by her dynamic and forward-looking policies." Coup leaders and opposition-party crushers Daniel arap Moi and Ibrahim Babangida wasted no time in pouring out their saccharine libations. Meanwhile, “the witch/bitch is dead" parties raged from Brixton to Glasgow and some appalled citizen has compiled a tumblr mocking nineties and nougties-born kids who've tweeted some variation on the question "who the fxxk is Margaret Thatcher?". The only less than predictable outcome of Thatcher's death was the wahala over the hashtag #nowthatchersdead, which left scores of Cher fans in anguish.

Like our pals at Africa’s a Country, Fela's words about Thatcher on his 1989 EP Beasts of No Nation came instantly to mind. Written in 1986 shortly after his release from a two year stint in prison, Fela is fiercely critical of leaders — both African and Western — who treat their people with contempt. As the struggle against apartheid came to a head, PM Pik Botha had warned that further uprisings would "bring out the beast in us." Fela's lyrics riff on this threatening phrase, and in a clever turn of the language it's Thatcher, Reagan, Mobutu, Botha, General Buhari and Tunde Idiagbon who become "animals in human skin." Beasts of No Nation remains one of the most incisive and excoriating critiques of state sanctioned violence to date, and the cover of the album pulls no punches either. We decided to ask artist and founder of Afro Pop Art Ghariokwu Lemi a few questions about the ideas behind the cover:

How did you come to work with Fela on the cover for Beasts of No Nation?

In 1988, when I did the cover art for Beasts of No Nation, I was actually invited to meet up with Fela and listen to the song by Dr Beko Ransome Kuti who was Fela's younger brother and was managing his business at that time. Having worked on Fela's album covers since the 70s I had left a mark, and was called on for some very important cover art statements when the need arose; Beasts of no Nation was one of them.

Many of the leaders that Fela criticises in Beasts - including General Buhari & Tunde Idiagbon - are shown in the cover art, but Margaret Thatcher, P.W. Botha and Reagan are very prominent. Why did you choose to focus on these three?

I chose to focus on these three personalities because on the global scene they were responsible for the state of affairs of the world. At that point in time, they represented the axis of repression as they supported and helped to prop up the apartheid regime in South Africa and its beastly human policies.

Are Botha, Thatcher and Reagan the Beasts of No Nation? Why did you choose to depict them with horns, hairy paws and bloody fangs?

I depicted Mobutu Sese Seko of Zaire, Mohamed Buhari and Tunde Idiagbon of Nigeria, P.W. Botha of South Africa, Ronald Reagan and Margaret Thatcher of the US and UK respectively with horns and fangs because they all belong to the same category as expressed in the song.

Were Nigerians generally critical of Margaret Thatcher at the time or was this a unique perspective that Fela was bringing?

People generally, and most especially in the UK, were critical of Margaret Thatcher at the time. She was actually nicknamed the "milk snatcher."*

What kind of responses did the cover receive at the time?

The first ecstatic response I got was from Fela and Dr. Beko Kuti. The Punch newspaper was first to publish and exclusive image of the cover art. Beasts of No Nation is one of my most rated Fela covers globally. I have never received a negative response to date, 25 years on. I just think the art speaks for itself; one can never run away from the truth

There's been a lot of talk about Thatcher's international legacy, but how do you think she should be remembered?

Well, talk is cheap, like they say. I'm  really not sure about her legacy internationally and neither am I sure of the legacy of a lot of the rulers I' ve seen in my time. As for how she should be remembered, I think that is left to the British people.