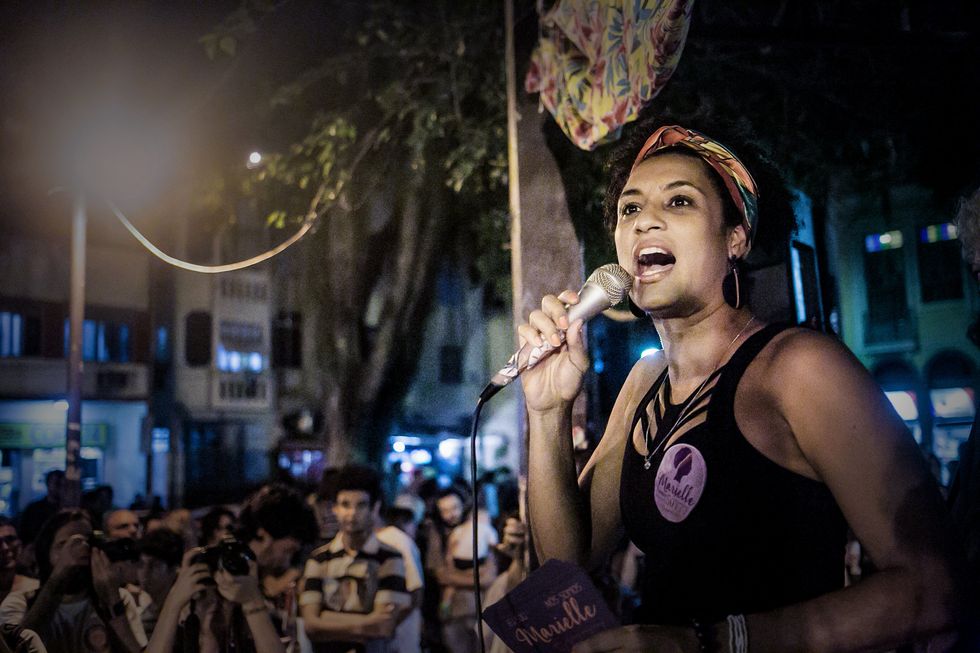 The violence in Rio de Janeiro right now is akin to a war zone, with per capita death tolls resembling those from Afghanistan and Syria. Two weeks ago I traveled there for business and stayed in the relatively safe and trendy neighborhood of Santa Teresa. Each night of my stay, was abruptly awaken by long streams of gunshots and also fireworks from the nearby favela of Falett. The fireworks—as I learned from my local friends—were not a result of any celebration, rather a signal that either drugs, guns, or the police have arrived. This is the norm for many of the 763 favelas in Rio which houses nearly 25 percent of the city's population.

On Wednesday night in Rio, Marielle Franco, a 38-year-old black councilwoman, LGBTQI activist, feminist and single-mother from Rio de Janeiro was assassinated alongside her driver Anderson Pedro Gomes. Her apparent crime was defending the lives of her people in favelas where brutal police routinely shatter black lives with bullets. Just days before she was gunned down, she had taken to social media to blast what is one of the most notoriously violent police battalions in the city. The four 9mm bullets that ended this rising political star's life have now been traced to ammunition sold to federal police. This revelation has only helped fuel widespread suspicion that her murder was an act of retaliation by those she criticized.

When I decided to leave New York City and moved to Brazil last year, many people assumed that it was the beach life, the parties, and the distance from Trump that led to my decision; only the latter had some credence. But those who know me best understand that I have always been passionate about Black people and culture—and Brazil is chock full of both. I was first introduced to this country in 2013 when I was invited to speak at an African diaspora conference in the state of Bahia. As an entrepreneur, what captivated me most was the untapped potential of the huge Afro-Brazilian market. Brazil is a nation with 110 million Black people yet Black media is close to non-existent and there are few products and institutions dedicated to their needs. In many ways this nation reminds me of the United States during the 1950 and 60s when it comes to race, which is also pretty daunting.

However, I was immediately impressed by the wealth of young black leaders and intellectuals who are passionately committed to the advancement of their people in the face of immense challenges. I could not help but equate these many individuals with American figures like Medgar Evers, Rosa Parks, John Lewis, and Fannie Lou Hamers. There is no doubt that this nation is undergoing a shift that reminds me of the beginning of our Civil Rights movement in the states. Last Thursday morning I woke up to news of Franco's death and the comparison really hit home.

Franco's death is particularly noteworthy because it marks a rare occasion where the struggles of Blacks in Latin America, and Brazil in particular, are in the global spotlight. Brazil, Latin America's most populous country, is one that has long hidden its apartheid behind the myth of a racial democracy. They prefer to point to classism instead of racism as the cause for the huge disparity in wealth and opportunities between Whites and Blacks. Meanwhile nearly 70 percent of those in extreme poverty in this nation of 200 million are Afro-Brazilian.

Make no mistake about it; Brazil is an African nation. It's culture, music, food, and dances are deeply rooted in that of the 5 million Africans who were brought here during the Transatlantic Slave Trade—10 times the number of those brought to the United State and more than any other place in the Americas. Brazil is only second to Nigeria in terms of its Afro-descendent population. Blacks account for 55 percent of this nation that is two thirds the size of the United States.

Lua Nascimento, a black social scientist from Rio, believes that "the fear that white elites in Brazil have had since the 19th century is that their country could turn into another Haiti." Brazil's "War On Drugs" much like the one in the United States has been used as justification for the imprisonment of black people and the deadly military occupation of black communities and favelas around the nation. Brazil's 61,000 murders a year accounted for 10 percent of the world's homicides. Every 23 minutes a black youth is killed here. In 2016 more than 4,200 people died at the hands of police, representing an increase of 26 percent from the year prior and those figures are continuing to escalate. These are the numbers that fueled Franco's fight against the system and statistics that she unfortunately became a part of.

But as bright and charismatic as Franco was, one would be dangerously ill-informed to believe that she was an anomaly. Franco belonged to a new generation; the first wave of Black Brazilians who have received higher education due to the country's recent affirmative action laws which took effect in 2003. They represent a new consciousness that rejects colorism and the many historically divisive racial classifications such as "pardo and moreno," and instead they unify as "Black" people. However, a vast majority of these brilliant minds continue to be locked out of opportunities for employment and, like the generation of young and educated blacks during the U.S. Civil Rights era, they have dedicated their minds, bodies, and talents to the liberation and the advancement of their people through the arts, activism, and social entrepreneurship. Brazil is a nation full of black geniuses.

It is important for those of us who are apart of the African diaspora and particularly those invested in issues of racial and social justice to do more than just tweet about Franco or to turn her into a hashtag. We have seen how even the legacies of some of our biggest champions such as Dr. Martin Luther King Jr. have been defanged in order to make them palatable to the very kinds of people who would have opposed him in life. The best way we can honor Franco is to take on her causes as a part of our own. That means we must begin to align and expand our fight for freedom and opportunities for Blacks in the mother continent of Africa, the United States, the Caribbean, Europe and elsewhere with those here in Brazil and Latin America.

We must recognize that anti-Blackness is global and that our fates are inextricably linked. We share the same blood, ancestry, struggles, aspirations, and resilience as a people. Dr. King once said that "none of us are free until all of us are free." And like King, Patrice Lumumba, Fred Hampton, and so many other men and women, Marielle Franco knew this well and made the ultimate sacrifice for it.

David A. Wilson is a documentary filmmaker, public speaker the founder of TheGrio.com. He lives in Salvador, Bahia where he is developing media opportunities for the Afro-Brazilian market. You can follow David on Twitter and Instagram @mrdavidawilson.