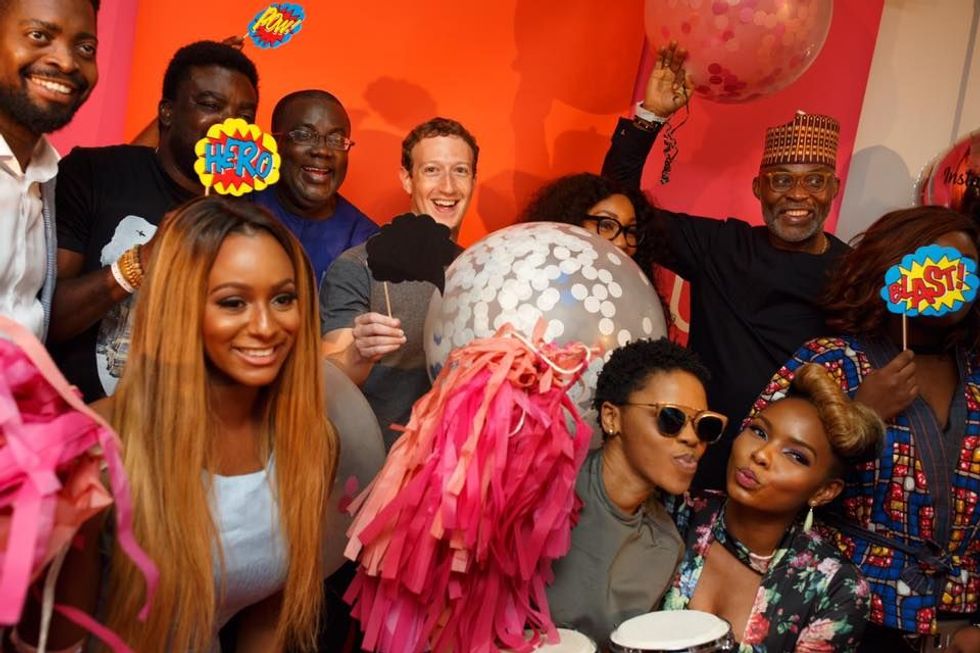 Should Nigeria now look to its tech industry and entrepreneurs to bolster their economy after Mark Zuckerberg's co-sign?

The past two days have been Mark Zuckerberg Mania in Lagos, Nigeria. Facebook’s founder fit right in as he made his presence known like any other Nigerian (or any other African, really) would—by showing up unannounced.

His first few stops included Co-Creation Hub, Nigeria’s leading tech incubator in the Lagos neighborhood of Yaba, where he met with startup founders and watched kids code (cute, right?). Next was Andela, a Chan Zuckerberg Institute-backed startup that trains top-notch techies and is insanely hard to get into, and they whipped out this flashy video recapping the visit with the quickness:

Zuckerberg even chopped it up with Nollywood’s finest and Nigeria’s top artists and entertainers as he made a cameo in a music video:

If you checked out his Facebook Live town hall, he took the time to point out how he made his fill with Nigerian Jollof, and how much the world has slept on Nigeria’s tech industry—acknowledging how far local entrepreneurs and tech developers have come despite that.

And Nigerian Twitter followed suit with their anticipated commentary following his time in their country:

Naija Parents: And so bloody what, will you face your book pic.twitter.com/x66ZQHM71V

The day that Arsenal sign two players. Mark Zuckerberg visits Yaba and kills any attempt to shut down the TL. Another L.

Boko Haram is in Nigeria but Mark Zuckerberg is visiting Sub-saharan Africa. The Thunder that will fire CNN...

Just ran 1.5m w Mark Zuckerberg! He killed me 1st mile! Pushed me to 8min. Was so beat & slowed I missed a photo! ? pic.twitter.com/Y1v5OJZUxy

Use capital letters for the "P" in "Pounded yam". #PutSomeRespeckOnIthttps://t.co/UxnZ8bmZdy

Ghana, TAKE YOUR L again! "It was delicious, it was really good" - Mark Zuckerberg commenting on Nigerian Jollof ??? pic.twitter.com/E5yxvxDJld

Jokes aside, this crop of innovators in Africa’s most populous nation may be Nigeria’s saving grace since it just fell into recession for the first time in decades on Zuckerberg’s second day in the country, Quartz Africa reports.

Data released on August 31 confirmed that a prolonged contraction occurred, where Nigeria’s economy shrank by 2 percent in the second quarter. From a weak naira to plunging oil revenues, the Nigerian government implemented a fixed exchange rate to check how many funds left the country. Once the naira became overvalued, not only did investors disperse, the policy also worsened the difference between the official and black-market exchange rate, leading to calls for a currency devaluation. The central bank eventually floated the currency in June, but investors are still not confident.

On the oil end of things, the Niger Delta Avengers from the oil-rich south riddled pipelines and hobbled exports, Quartz Africa says.

“Nigeria’s president, Muhammadu Buhari, whose election last year saw a bounce in market confidence, has come in for criticism for the slow response to these challenges,” Quartz Africa continues. “Political pressure on the president is now likely to increase, following news of the country’s first official recession in more than two decades.”

The tech industry and Nigeria’s strong entrepreneurial energy is an example of the youth making it happen via unconventional means, despite their country’s struggling economy. By their success to seek solutions creatively and their potential to make an impact—which even caught the eye of Zuckerberg to play a part in—the continent’s largest economy will hopefully bounce back with momentum.