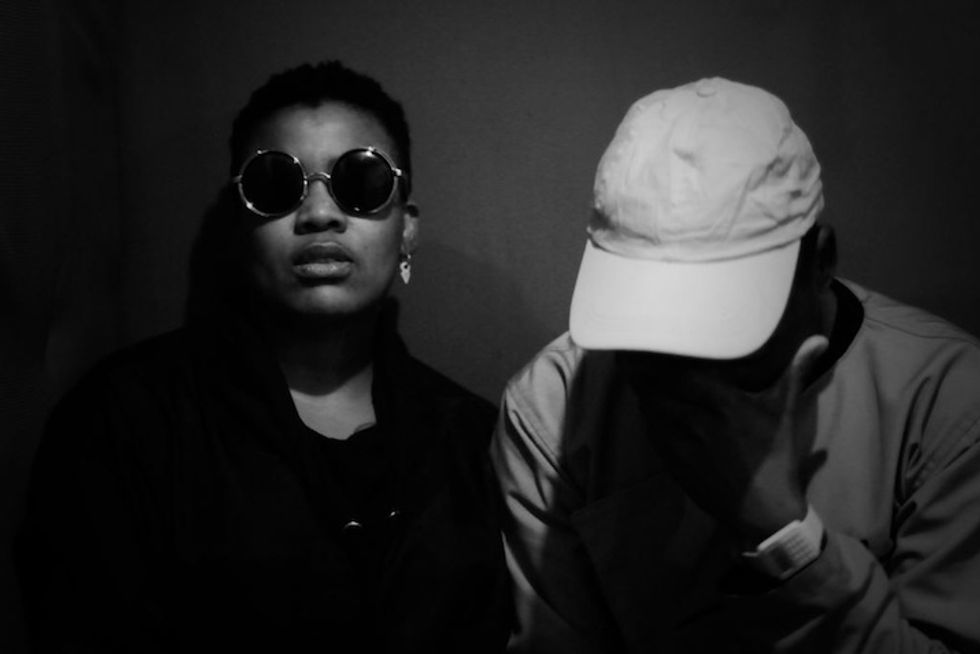 When we first spoke with Mashayabhuqe KaMamba last August, the Durban-bred, Johannesburg-based musician told us his phenomenal debut EP, The Black Excellence Show, had been influenced by a list of “fellow Afrikvn musos" that included Thandiswa Mazwai along with Madala Kunene, Yossuf Ndou, Busi Mhlongo, and Vusi Ximba. Since then, the Boyzn Bucks affiliate has released a slew of one-off singles– "TrvpMuvskv (Impendulo KaBaba)" and the Okmalumkoolkat-featuring “Shandarabaa Ekhelemendeh"– that continue to sharpen his Digital Maskandi sound, a rising sub-genre that brings traditional Zulu "maskandi" music into the future while paying tribute to South Africa's musical elders.

Now, with his sights set on Austin, Texas, for SXSW 2016, the maskandi trap king has joined forces with one of his heroes. In March, Thandiswa Mazwai launched an initiative open to unsigned artists in SA. The winner of the King Tha 4 The Babies contest, announced on Mazwai's birthday, would have the opportunity to feature the Bongo Maffin singer on a new track. "I was looking to find someone that was moving against the grain but still seemed rooted in a very south African sound," Mazwai tells Okayafrica on why she picked Mashayabhuqe KaMamba. "He calls himself the urban Zulu which is a term that was coined by the legendary Busi Mhlongo to describe her music and aesthetic. This touched me as Busi Mhlongo was my musical master."

On working with Lord Booqe (as he sometimes calls himself), Mazwai tells us "The track was basically done so all I had to do was step in and translate what he said into my own musical language, bringing in my own experience. He was very excited and this humbled me. We recorded in a small studio in what seemed like an abandoned building in downtown Johannesburg and it was seamless. We were instant friends and I wish him all the best. May the gods of music continue to bless us all."

Titled "Izayoni Tribute To Makhuzwayo," the song honors Mashayabhuqe KaMamba's grandmother and the work she's done for her community. "This song invites every kid in Africa into my spiritual journey as an artist growing up in this 21st century where everything gets diluted very easily... talking cultures, religions and indigenous languages," he wrote us. "After the success of my EP, everyone has been having their views on my artistry and how it has change their lives and made them love their cultures and what not. But, all of that has never been enough for me. I feel like we can still do more in terms of uplifting our people's spirits. We need something to believe in and for me it starts with my religion, faith and the need to be content with what made you." In the Q&A below, we spoke with Mashaya over email about his collaboration with Thandiswa Mazwai.

Okayafrica: What does it mean to you to collaborate with Thandiswa Mazwai?

Mashayabhuqe KaMamba: Where do I start? *sigh…. Ok, first of all I haven’t released an album, haven’t received any awards for my previous EP. I haven’t toured the whole country, not to mention going to neighbouring countries (not that I don’t have access or a passport) but my level isn’t that UPPER compared to someone in her calibre. I have studied this woman ever since I started doing art classes in high school. She wasn’t about being cool and fame (and still). She kept it real, stayed true to herself and to her roots. Made good music and performed with the greats in Africa. Critics wrote what they wanted the masses to perceive her as. She never cared, not even once she ran into any newspapers about anything. She’s been my motivation; she’s real people, man. She’s a reflection of Mashayabhuqe basically; ok at least I’d like to think so. This is what I call *New Moon* not everybody is willing to adapt to it but it kinda forces them to look and question it. Why is this thing so rare and [nonconforming]? That’s how I view this collabo. It’s a blessing. I’m sure the spirit of mam’Busi Mhlongo got us to work together.

Okayafrica: What exactly do you mean by "new moon"?

Mashayabhuqe KaMamba: New Moon: like literally a new one compared to the one we all know. Imagine if the world was changing and we woke up to a different sunrise or going to bed asking ourselves about the new moon. A bigger and bluish one in color (imagine). It's like a supernatural thing that we all have to take time and adapt to it or something.

Okayafrica: How did the collaboration come about?

Mashayabhuqe KaMamba: Ok, so I’ve been really preaching to my friends and family that one day I’ll meet and work with Thandiswa, but it was just one of those “fantasies” I guess. Then two months back, she tweeted about her #KingTha4Free feature competition as she was trying to help all the up-and-coming artists in SA and the winner was going to be announced on her birthday. I didn’t think twice about this. I got the email and immediately sent my songs "Afrikvn Lordz," "TrvpMuvskv (Impendulo KaBaba)" and "Izayoni Tribute To Makhuzwayo." So you can imagine how old this joint is. I had to wait and see. I didn’t really think I was gonna win honestly. I saw her bigging-up some of the unknown acts and I was like “nah she ain’t messing with this new sound.” Little did I know she saved my name for the PRIZE. I was sweating like crazy when she announced me as a winner of this #KingTha4Free feature.

Okayafrica: What languages are you and Thandiswa singing in?

Mashayabhuqe KaMamba: I’m Zulu and singing in IsiZulu language and she’s from the Xhosa tribe so her verse is in IsiXhosa language. She’s amazing.

Mashayabhuqe KaMamba: Makhuzwayo (Mrs Mpanza) *Matriarchal* my grandmother from my mother’s side. She’s a prophet and has a church, but unfortunately she had to stop holding church services at her house because of the storms that engulfed that place (north of KZN) which destroyed her church. She recently hired a tent to hold these services. She has done a lot for her community, uplifting and leaving folks with hope. She’ll pray for them and everything will brighten up in their lives. I’d see folks coming back after a week with a huge smile on their faces accompanied by white chickens as a sign of gratitude.

Okayafrica: How would you say Digital Maskandi has evolved since your debut EP [The Black Excellence Show]?

Mashayabhuqe KaMamba: The sound is still the main thing. The autotune is still there (sometimes), but we have more grungy and really loud drums now; the execution has evolved immensely like how I structure my verses and make it easy for any race to grasp something and sort of like finding where was I when I wrote this (I mean mentality and spiritually). I have found new love now of doing things. I like backing more. If it was that easy, all my songs would have more backings and less verses, but the sound sort of like forces me to stick to the formula. At the end of the day you don’t wanna lose your people, you gotta grow with them bit by bit. We’ll get there. The aim is to build this legacy and make sure it’s secured and stays alive (forever).

Mashayabhuqe KaMamba: (for me) It’s a sound of EXCITEMENT (It could be anything that makes you feel like shouting *skrrrrr*…maybe you just bought new rims of your Galofu (Zulu name for Citi Golfs) and you feel like busting a 360 *drifting*..that sound, that adrenaline rush, that SKRRRR!