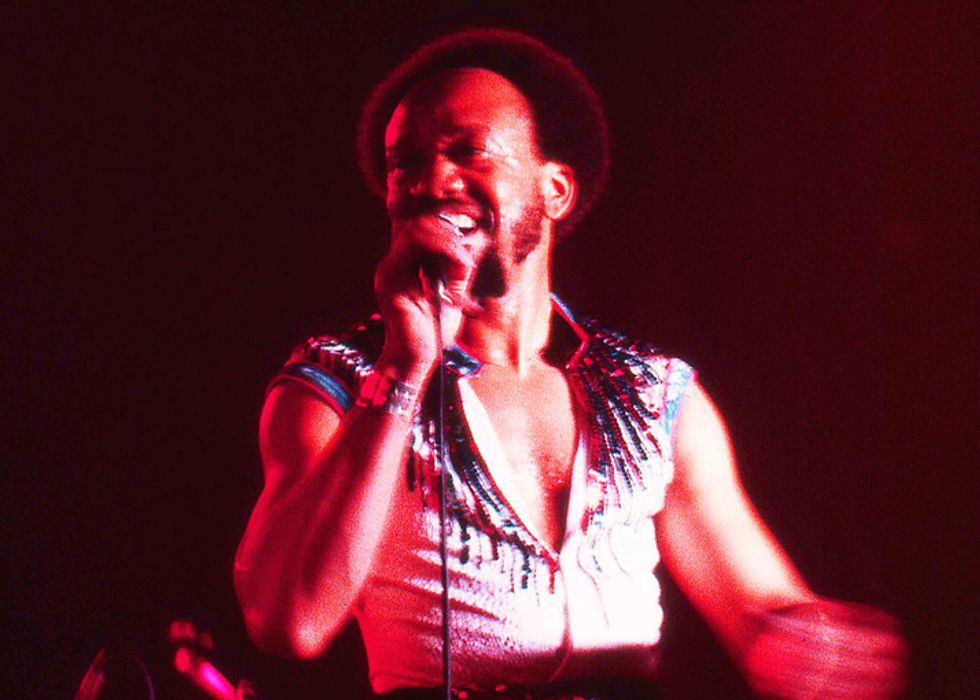 When Daví reached out to the legendary funk and R&B star Maurice White, he never expected to get a call from the man himself.

“‘Hey! So how you wanna do this?’ he asked. I could barely speak out of shock. This man I’ve been listening to my entire life, just called me.”

In 2005 the artist and choreographer Daví, was writing a thesis at NYU about how African-Americans—through the trauma of the slave trade and racism—held on to continental African cultures and traditions. Growing up in Virginia, Earth Wind & Fire was a favorite of Daví’s mother and quickly became one of his. Because of his close connection, Daví decided to use the band as an example of African-Americans retaining musical aspects of African cultures.

“In 6th grade, we had those gigantic 4-foot speakers” says Daví, “with a 64 CD turntable. I would sit in front of the right speaker with the "Runnin’/Brazilian Rhyme" on repeat, listening to understand every single vocal and instrument’s role in this 6 minute and 44 second masterpiece.”

“I saw ‘retaining’ as a ritual passed down from generation to generation,” says Daví. But “as I studied, I soon discovered that ​what I thought was​ ‘retaining​,’ was ​actually more of a spiritual hearkening that​ many African-Americans experienced to understand an African homeland. The thesis soon became an understanding of how African-American peoples rediscover and reclaim a link to an African homeland after spiritual calling.”

“At the time, I was trying to understand my own relationship to Africa, especially as a musician. I felt a deep understanding of polyrhythm and spiritual grounding in music but didn't have any clear links or education to understand my feelings. As an artist, I thought that if I could understand another African-American artist's process maybe I could have some insight of how to grow in my own process.”

Daví checked all the Earth Wind and Fire sites online and emailed them requesting an interview. The group’s lead singer Philip Bailey emailed him back with a phone number. “It seemed all too amazing to be real.” Bailey told him the type of questions he was asking were better suited for Maurice White.

“I knew Maurice had just stopped touring and had recently had a stroke,” says Daví, “so I immediately felt defeated, but in spite of my feelings I was able to eek out one word, ‘how?.’ The next day at 7 am Daví got a call from the legend himself, Maurice White. They made plans to do an email interview to give White an opportunity to think about the questions.

“Two months after the interview, EWF had a show near my mother's house in Wallingford, CT.” says Daví. “Philip had mentioned that he would get me and my mother backstage passes. Walking up to the venue, I was calling Philip back to back on his cell, no response. My mother finally turned to me and said ‘You don't have to lie to me.’ I shook my head and enjoyed the opening act. Finally as EWF were about to take the stage, I got a text from Philip telling me what to do to get backstage. As Biz Markie would say, Mama caught the vapors that night!”

In the never-before-seen interview, below, we hear specifics about White’s origins, motivations and what it mean to own the trademark for the Kalimba. Best of all, we catch a glimpse of Maurice White’s thinking about his own legacy.

What you would you define as the African-ness in Earth, Wind & Fire’s music?

An association with tribal influence made visible through the use of percussion sounds and the approach to rhythm.

What was the motivation for finding Africa/Egypt and then incorporating it into the music?

The truth was finding myself &identifying with my African roots, which started back in Chicago, looking for my roots.

Whose idea was it to incorporate African-ness into the group?

I identified with the total concept

Where did you get your first Kalimba? Do you know about Hugh Tracy?-he was  an Englishman who traveled to South Africa and became fascinated with African culture and particularly the Mbira-(the original form of the Kalimba). In an effort to spread awareness of Africa’s musical heritage he made the smaller adaptation of the Mbira, the Kalimba. Because the Kalimba is therefore not a genuinely African instrument, do you feel this hinders your goals in incorporating the Kalimba?

“Bill’s Drums Shop” back in Chicago when I first played with the Ramsey Lewis band it was introduced by a fellow band myself who I saw playing for the first time. I bought the trademark from Hugh Tracy back in the 70’s. He did a lot to promote the instrument, but I had an opportunity to travel around the world and promote in my own way and the rest is history.

What was the process involved in creating the music that incorporated this African-ness?

The first creation to create a drum troop and use in the mini band like a drum choir and taking the points of rhythm and using the rhythm as a theme.

Across each group member, how well were the African incorporation and the importance of it understood?

They were not hip to the concept. I taught those who paid attention the process.

Did the group travel to Egypt and other parts of Africa together? If so, how did the travel inspire/influence each of the members? If not, how were the African ideas shared with other members of group?

We all traveled back to Egypt back in the 70’s it was an eye opener to each of us. Individually they all experienced it in a different way.

In Earth, Wind & Fire documentary, Shining Stars, the goals of the group seemed to vary, Freddie White stated that the goal was to “be the best band in the world;” Mr. White, you stated that you were constantly attempting to find social voids in the music and entertain, inspire, and help African Americans to find themselves through the African use in the music. Can you state again what you believe the overall goals of Earth, Wind & Fire were and how well you think were they achieved?

The goal was to render to mankind on a universal level and to inspire people to think.

Charles brought expansion and vision to the music and shared us new possibilities and song production and a new approach to melody.

Was it ever an aspiration to perform in Africa and get feedback from the place you’ve celebrated in your music?

I always wanted to perform in Africa but never had the right opportunity to perform there.

What was your favorite place to tour relative to black audiences and their reception of the music? Why?

Washington D.C. was one of our favorite places to perform; we had our first break around east coast. Our first number one single was in Philadelphia. People could relate to our music

In concerts, the group incorporated a number of things that could be interpreted a number of ways such as the entering and exiting in the pyramids, the alien costumes, raising the drummer from the ground, coming out of the capsules, and you combating with the Aliens. What did some of these things symbolize or not symbolize?

What is your own personal relationship to the African Diaspora?

The African heritage should not be taken granted nor forgotten should always represent pride and respect.

In your opinion, is music necessary for the continuation of a Diaspora? What do you feel is missing in the music of the present day in reference to the African Diaspora?

It is important to be informed and stay informed with your heritage. Some of the current music is there in the subconscious sometimes it needs to be awakened and that can happen through association .

What were the meanings behind these album covers?:

—Represents the one god.

—Dedicated to Charles Stepney sending him on his way.