Maya The Poet Speaks On Microaggressions As Light As The Rain 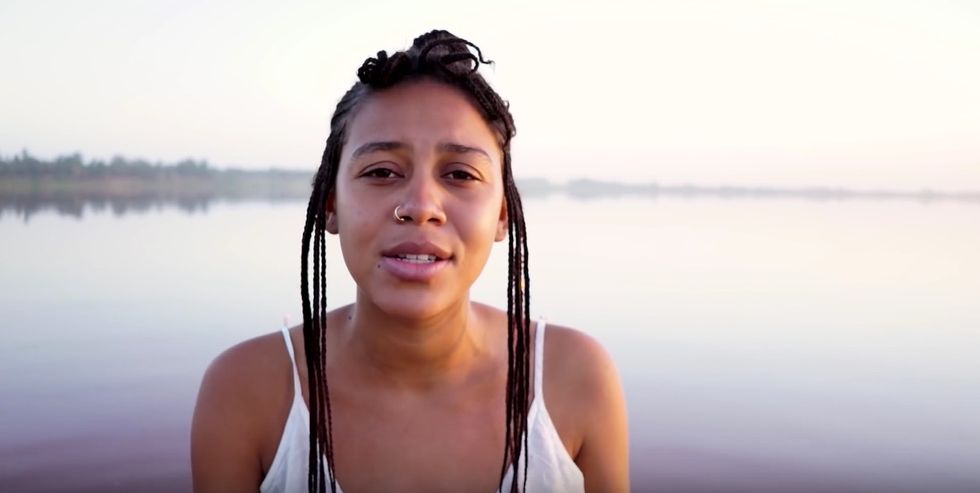 Okayafrica caught up with Maya Wegerif, aka Maya The Poet, to talk microaggressions and her new poem, 'Sometimes It Pours.'

Maya Wegerif is a South African poet who lives in Dakar. She recently dropped the stunning video for her newest poem, “Sometimes It Pours." We caught up with Maya over Skype to chat about her writing process, microaggressions, as well as the impact Claudia Rankine has had on her life and work. Read our full conversation below and follow Maya’s musings on her twitter, @Mayathepoet, or her tumblr, Rural City.

Neyat Yohannes for Okayafrica: You are currently based in Senegal. Is this home? Where did you grow up?

Maya Wegerif: I was born in South Africa. I grew up, for the most part, in South Africa and then moved to Tanzania when I was 16. And then, from there, I went to school in the U.S. in Massachusetts. And then after that, I came to Dakar.

I would say, right now, I communicate most in English. That's maybe the dilemma. I think African writers have been trying to work past that whole cyclical problem where you also want to be understood and you want to be read widely. For instance, my mother tongue Xitsonga--that's a minority language in South Africa--even if I wrote in that, I haven't lived in the area that speaks Xitsonga for years, so it wouldn't make a lot of sense. I'm working on some poems in Xitsonga, poems for when I get back home, but mostly, I'd say I work in English. I speak to my dad in English with bits of Swahili and I speak to my mom in Xitsonga with bits of English.

I didn't read poetry in other languages growing up. Even though there's a South African poet who comes from the same village I'm from--and he did something in Xitsonga--I have very little exposure to that and I just don't know what Xitsonga poetry should sound like. So yeah, I think my introduction to literature and stuff was in English, mostly.

Your newest piece,“Sometimes It Pours,” immediately made me think about microaggressions. What motivated you to write this poem?

Microaggressions. The immediate motivation is I woke up one day at three in the morning, and for some reason, I was just being haunted by this instance that had happened after I had been arrested by some racist cops in Massachusetts. I was in court and I remember I was nervous, I was scared, and I didn't say what I would've wanted to say. And so, I had one evening, for some reason, it just wouldn't leave me alone. It was just nagging me and all the other instances where I've experienced racism and haven't reacted in the way that I wanted to. Because I'm the kind of person, who, after things have happened--even the smallest of interactions-- afterwards I'm picking them apart thinking about what I should've said and what I should've done. So that happened to me one night. It just wouldn't leave me alone and I was really quite emotional about it. So I wrote this poem because I wanted to forgive myself. I thought, this is really too much, like, how can it always be the fault of the victim? How we respond to microaggressions and other forms of discrimination. As opposed to it being the problem that the discrimination exists.

I'm interested in the idea of how much of microaggression can happen and it still be micro. How is it micro? What's the difference between one instance of, say, what you might call overt racism versus ten instances of so-called microaggressions? Sometimes, I battle with the term ‘microaggression.’ I'm like, who's to decide what's micro? What if it's not micro to me?

In the video for “Sometimes It Pours,” you are immersed in water. Was this a cathartic experience for you? And may I ask in what gorgeous location this was shot? Is this setting particularly meaningful to you?

So the poem is shot at Lac Rose, or Lake Retba in Senegal, it's just outside of Dakar. It appears pink because of the really really high salt content. So it was used both by me, and also the director, to signify almost the tears that I cried when I wrote the poem and when I first performed the poem. Tears that I've cried about the instances I talk about. And of course, tears are salty, and that lake is one of the saltiest on the planet. So it's tears, but then also the metaphor that runs throughout the poem about rain and especially about when you are completely drenched in rain.

You happen to share a name with the late great poet, Maya Angelou. Do you draw inspiration from her?

I was named after Maya Angelou. So it's one of those situations where I'm like, "I don't know, was it me that wanted to be a poet, was this always the plan?" But in my ethnic group, what we say is that a child will cry for the name of someone before them and they should be given that name. So if you're named after that person, you also take on that person. This is how the deceased carry on living. Their spirits literally inhabit you. So for instance, I have a cousin named after my grandmother's sister and she's literally a reincarnated version of her. She's into really old food and old things. I definitely consumed pretty much everything that Maya Angelou had written by my early teens, so whether consciously or not, it definitely shaped my world and my worldview at that time.

Do you remember the first poem you’ve ever shared with another person or an audience? How did it feel?

I don't remember the first poem I shared willingly, but my mom invaded my privacy when I was 11--luckily--by reading my journal. And inside there, I had this poem that she submitted to some writing competition. So then it was published when I was 11 years-old. I think that's maybe the only thing that made me think like, oh okay, maybe I'm writing poetry. Because I don't think I was aware of what was happening.

Where is your favorite place to write?

I have a very tense relationship with my work so I spend, I think, a large part of my life trying to run away from the fact that I am a poet and then poems sort of come to me, luckily. Because otherwise, there would be periods of years where I would've written nothing. And then when I finally come to a place where I'm like, okay, this is so clear, this is one of the only things I can do in my life, I try to find the poems. So when they actually agree to come meet me, after me snubbing them for all these years, then I appreciate them wherever they come.

Do you have anything in the works that we can get excited about?

OMG. I'm working on a poem about The Land Question in South Africa. So that's going to be my next project. I'm quite excited about that. I think you guys will just have to see how that goes. And I will too. You know, I'm also witnessing this just as much as any audience member.

Okay, well I think it's important to give thanks and appreciation to Claudia Rankine from whom I borrowed the metaphor of microaggressions as light rain. I don't know what it is about sometimes just needing someone to articulate the things that we feel--she went with Citizen and just did the most. It's amazing and to me, that metaphor has been so useful. That metaphor is completely borrowed from her and I'm so so grateful that she came to that and that she wrote it and that she shared it with us. It's been extremely useful for me and my own healing process.