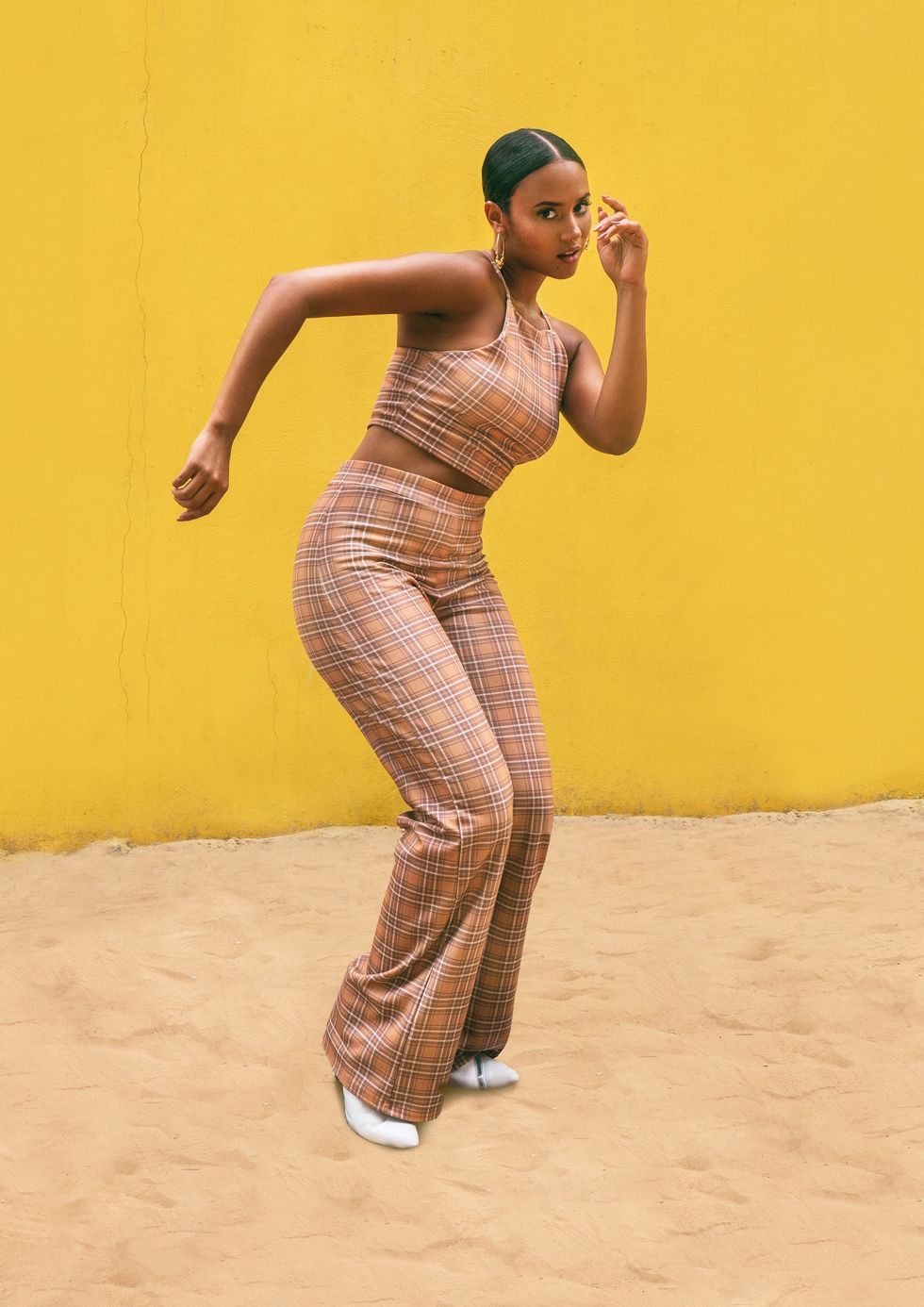 We talk to the singer about her latest album, Manga, which offers a fresh pop take on Cape Verdean sounds.

Mayra Andrade is something of a musical mermaid. Now living in Lisbon, the Cape Verdean pop singer firmly plants one half of herself in her mother island while the other swims into sounds from beyond. Her fifth and most recent album, Manga, released in February, is a fresh take on old styles.

Andrade has always lovingly trespassed the stodgy borders of traditional Cape Verdean music. Manga takes it further, hitting up the ranks of West African pop and Lisbon's Afro-Portuguese dance music for inspiration. It's gorgeous and minimal, sing-able and danceable for any body. Manga also reminds Cape Verde of something that it – and the wider world—sometimes forgets: that it's an African country interwoven with its neighbors.

Cape Verde's traditional music is global, but its pop music rarely reaches outside the Lusophone world. Mayra Andrade, sharpening her country's cutting edge, should be counted as one of the best pop artists in West Africa, not just Cape Verde. As she says, her latest album Manga is speaking to her fans like nothing else in her 19-year career. The recent video for her song "Pull Up," shot in Paris and Dakar, features dance crews whose brazen moves mirror the message: "Let me be free to be what I really am."

Andrade spoke with OkayAfrica at the Atlantic Music Expo in Praia, Cape Verde, the day before her first homecoming concert for Manga.

How would you introduce yourself?

I am Mayra Andrade. Cape Verdean. African. Singer. I'm someone who's always felt that they had to do something different, to open a new chapter of Cape Verdean music.

When did you first begin making music?

I remember playing music in my room when I was three years old. When I was four I asked for my guitar. I remember as a child going to the countryside with my family and having all the batucaderas around us, playing batuko and funana. It's part of me. [But] I had my parallel world: I would go and look for CDs and vinyls from Brazilian artists, 'cause I was more attracted to that openness.

I lived in Cape Verde and outside Cape Verde. I know this country from so many different perspectives. That gave me an angle: O.K., this is the normal way and I don't fit there, so what am I going to do?

What is Cape Verde at its heart? Where do you fit in within that?

Cape Verde is like ten small rocks lost in the middle of the ocean. Everything could go wrong here, but my people . . . We made this country out of nothing. I always say our only resource is the human resource. I'm very proud to be part of a nation that is mostly known for its music. In that sense, what I do with my music is very important because it impacts the way people see this country.

What have you learned, being expected to speak for your country's music?

From day one, I wanted my crowd to accept me the way I was. If I did what they asked me, I wouldn't be doing this music. When I was 15 and 16, [older musicians] said 'Look, you have a great voice – just stop messing around and improvising. Just do it properly, the way we do it, the traditional way.' You have the right to try things, and you have to be humble enough to understand that each album is a portrait of a moment. This is all I can give, today. Tomorrow I will have more to give, but it will be different.

Cesaria Évora pushed open a big door in the '90s. We just need to keep on pushing and not stay in our comfort zone. From album to album, I just start from scratch. I'm scared of being bored with my own music—that would be like death. I don't think I can serve my culture better than the way I am doing.

Manga is so different from your earlier work, but rooted in the same sounds. It's afrobeats, but I'm hearing the Cape Verdean ferro, the gaita, and the cavaquinho.

Yeah, this album is an Afro-contemporary album. I call it that because it's more than Cape Verdean. I went to Ghana three-and-a-half years ago, and it blew my mind. It was the [same] moment I moved to Lisbon, and you had all these new sounds, you know, from the suburbs . . . .

Yeah, there's so many [artists] doing great stuff there, you have all these Cape Verdeans, Angolans. And you know, after doing four albums, I wanted to find in my own music the joy I found when I would listen to Wizkid or Davido or Mr Eazi, or Maleek Berry. I really love what these guys are doing, but I [also] wanted to find my own sound.

This afrobeats, this West African sound, has spread to the world. I'm a West African. The Cape Verdean instruments are there, but in another proportion.

What else is new about Manga?

I'm living a very interesting moment of my life: I'm 34. I've never felt so aligned with myself. The purpose, the message. You just want to say things in a way that they will be received and understood. Before, I used to compose in a very metaphoric way, [but now] I try to make the story more clear, to make it more accessible.

What does it mean to be a Cape Verdean musician living outside of Cape Verde?

I think people don't realize how it is to be from such a small country with no market. We don't have a proper music industry here. If you take a Nigerian artist, he doesn't need to leave Nigeria! You go to his Instagram, and he's followed by millions because all Nigerians know him.

You know how many Cape Verdeans are here? 500,000. This is our country, this is our land. But we know that, if you want to survive, you better know how to swim.

So what does it mean to be here now, playing on your home turf?

It will be the first gig of the new album where almost everybody will understand every word. I want people to have access to what I'm saying. But the reality is that people [often] don't have a clue. It's very particular to build a career outside, knowing that you have to touch people through other ways. In this, Cape Verdean music is very powerful, because the feeling always crosses all the barriers.

Is there a song that makes you feel most at home, either as a spiritual or physical place?

What I can say is that, it doesn't matter where I am, if a Cape Verdean song starts to play, I will recognize it from the first beat. There's something in the way they attack the chords, the arpeggios. This immediately takes you to that common place, this feeling of belonging to a place but being so far away most of your time.

With so many Cape Verdean artists I've talked to, that's the undercurrent, that it's a tough bunch of rocks, but it's got magic.

And you have to be sensitive enough to see that and feel that. So when people say, 'Should I go to Cape Verde for my holidays?' I always ask, 'What are you looking for?' If you're not willing to put the time and the openness and the feeling to just wait and see life happening, and to discover the look of the people here—if you don't have that time, then don't come here. You're going to be asking yourself, 'What the fuck am I doing here?'