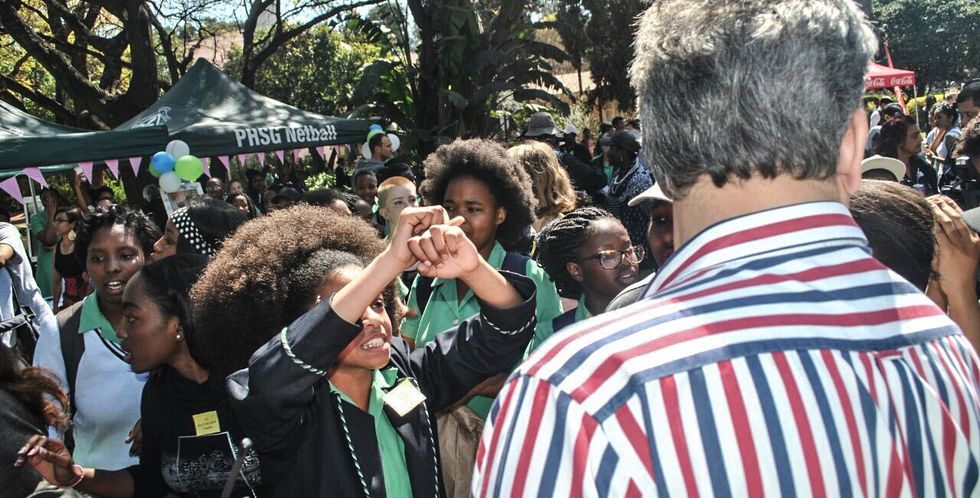 South Africans discuss the protests against racist hair policies at the Pretoria High School for Girls.

Monday morning, a group of young black South African women continued their fight against institutional racism at Pretoria High School for Girls. The focus is on the school’s policing of natural hair in the ranks of its students.

On Saturday at the school’s annual Spring Fair, a group of students organised a silent march around the school to protest against rules determining what kind of hairstyles the school’s black students were allowed to have. Specifically the prohibition against many natural styles.

Incidents of racist and inappropriate comments by teachers, reports The Daily Vox, are rampant. A recent incident saw a group of students dressed in all black and doeks surrounded by school guards during an outdoor assembly. Their clothing was regarded as “politically motivated.”

Saturday’s peaceful march, consisting largely of grade eight students, had a heavy police presence. It came to an abrupt end when teachers and volunteering parents threatened to call the police to have the young girls arrested.

Videos and photos from the protest made their way to social media. A hashtag, #StopRacismAtPretoriaGirlsHigh, began to trend.

In the face of arrest and police brutality, the schoolgirls continued to fight and carry on the protest today.

We asked men and women across South Africa their reactions to the protests at Pretoria Girls High.

“It's been such a weird thing, I personally didn't realise how I was restricted in my own high school until this protest. I personally think: relaxed, weaved, braided, dreads, permed or even jheri curled, it's my hair, it should be up to me and it should be up to the many girls across SA how they choose to maintain their hair. Not up to institutions that claim my natural hair is untidy.

How in a country with a majority black demographic is this still a battle in 2016? But it’s bigger than hair. Someone tweeted that in these schools majority of teachers are white, the cleaners, gardeners and cooks are black. What does that do to us young black kids? I will say, the Model C school children have highlighted an issue within our country that has been swept under a carpet for too long. Those young girls are heroes to me.”

“It's incredible the #BlackGirlMagic that's emerged. To say enough is enough with something that has plagued every brown girl in a white context since the beginning of time. The fact that your braids can't be too big, your dreads not neat enough, your afro never professional. How your music was a little too much, your voice a little too loud and when you spoke English it was 'so well' and the right thing to do.

With the spread of students setting the world on fire and not taking rubbish anymore it’s great to see how different groups are taking on different issues especially as women. That the micro nature of our existence is taken into account. This is something every black girl has had to fight at some point whether you were cognisant or not. Suddenly I remember how I spent years having to really think about my hair before the start of school the arguments with my mum and the 'do you have cancer' conversation when a braid fell out. Now I have dreadlocks and my girl child has some hope. God bless the youth.”

1. It is unacceptable that Black children are not allowed to be children and are required to learn in intolerable circumstances; with their bodies policed and are burdened with having to assert their humanity.

2. It's also unthinkable that even today whiteness is considered the 'normal' way of being, the standard against which our general appearance is measured and that code of conducts are still done in ways that assert this.

3. A girl apparently had her dreadlocks cut at an assembly as "an example to others", which is alarming as it sets back any effort to teach the learners about consent and bodily autonomy. The silent lesson in that action is that those with more power have a right to your body, for both the victim and those who were watching.

4. We know that this school is not unique and for every incident we hear, there are many others we do not hear of. We need immediate action taken to ensure that policies meet some kind of guideline which prevents discrimination.

“For me the image of Peter Magubane’s photos of miners stripped naked for inspection comes to mind immediately when a debate hinting at policing black bodies. It's not just the Model C schools that have problematic regulations for black girls hair. In fact the same rules are used in black school throughout the country because in truth the notion that black women's hair is abhorrent is deep set in our institutions. This is the toxic prejudice that begins at school and continues as black women try to navigate work later on. Imagine if black girls were permitted to explore and celebrate their authenticity and individuality through their God given bodies…”

"The stand taken by the young women at PHSG highlights how much still needs to be done in the much ignored post apartheid decolonization project we were reminded of by #RhodesMustFall. Most importantly for me however, I'm excited at seeing girls as young as 13 actively claiming their space, place and heritage. To see videos and images of these young lionesses refusing to be shaken reminds me of Kendrick Lamar when he said 'we gon be alright.’”

“I’m in two minds: I’m happy that young people are really fighting back and with the help of the internet raising awareness around racial discrimination. I mean I remember being told to take my cornrows out or I wouldn’t be able to write exams when I was in high school. I was quite tenacious but people just took it as “Ah Hakim you’re just being rebellious for no reason,” but if I look back I should have got in much harder I wish I had as much heart as these young women and girls when I was in school.

On the other hand there’s a lot of sensationalism in the world with the internet, and I think these girls are going to get caught up in a lot of fake hysteria and adults projecting their own problems onto younger people. But it could be a catalyst for transformation.”

“It’s really not okay for our kids to be dealing with something that the government should have addressed years ago.

It seems that some white educators and parents do not want to accept that we are Africans in Africa. Some white racists seem to be offended by our African-ness, our bodies, our hair, our languages and our cultural practices. They are hellbent on erasing who we are and want to turn us into house niggers who follow their rules and what they deem 'acceptable'.

Strange enough, when white people go to lets say France, they learn the language, embrace and adapt to the French ways, but in spite of living in SA for many years, they want US to adapt to the western ways. Its racism.”

“I am appalled at the confidence and arrogance that the system of whiteness continues to perpetuate in post-apartheid South Africa. How is it that in 2016 many young women and girls are still dealing with social ills that their foremothers dealt with during the liberation struggle. We should not have to be greeted by 15 year old fighting for their rights to breathe because with 22 years into democracy, they should be breathing.

Maybe our problems is that we have been so disillusioned by the rainbow sparkle so much that schools such as Pretoria High School for Girls continue to shock us in their anti-blackness. It's either that or our hope is so high that we are willing to be in denial about the real state of our country. It is sad that in 2016 these are the issues we are still addressing. It is sad that young women fighting for their space is seen as inspirational. It is sad that we react case by case instead of implement and enforce policy change.

I remember being policed about my hair and language when I was still in high school. Blackness was something not to aspire to and whiteness was made into a standard. The policing of black women’s bodies in particular has a history seeped in slavery and colonialism. A woman’s personal life is always political as she always has to fight for her right to be.

Some responses from those who are siding with the school have urged us to respect the school’s code of conduct and that it has always been the case that schools have a standard policy on appearance and thus it needs to be respected. Firstly, these policies are one sided as they are always put in place considering the standard that is whiteness and never considers any marginalised body. Secondly, it always blows my mind how appearances have any connection to one’s cognitive ability.

Alas, as sad as it is, it is necessary for now. Necessary because we must face the state of reality that we exist in. Colonialism and Apartheid may have ended in name, but in principle - shem, we live with it day in and day out. And so we must carry the spirit of our foremothers and fathers and fight for our right to exist.”

"I just hope schools throughout the country and perhaps even throughout the world will carry through the conversation that the brave young leaders from Pretoria Girls High initiated today. I went to a school called Settlers High a public school in the Western Cape. Like many schools my alma mater can be praised for many things but unfortunately not inclusivity. The school is largely attended by young people of colour yet the name, emblem and school song celebrate colonialism.

When I was a student there our school hair policies were completely inconsiderate of black, natural hair which was deemed unruly and illegal according to the school's prejudiced code of conduct. I hoped things had changed but last month my brother was told that perhaps he would listen better if his hair weren't so bushy. He did not stand down and the teacher in question, who has a reputation for bullying learners, eventually apologized to him in front of the grade. My brother said thank you for the apology but that he does not accept it because she aimed to humiliate him by publicly airing her prejudice. We don't want apologies. We demand change."

"Western ideas have been so intrenched in us South African blacks that back in my day us coconuts understood that white comments about black hair, scent, accent or skin tone was wrong but failed to fully grasp why. We are with you, spoke like you and played sports alongside you but still... We weren't you. The identity crises is ours whether the reason for it was due to oppression or our own choosing but on a human level; to make mockery of another's being because you deem them inferior or just because they are different is a terrible evil. The coconut now understands that. #StopRacismAtPretoriaGirlsHigh as now set my ambiguous reaction to oppression straight. #salute."

They were told by their school that their hair is "untidy." They are now protesting.#StopRacismAtPretoriaGirlsHighpic.twitter.com/WEaRZqbQQF