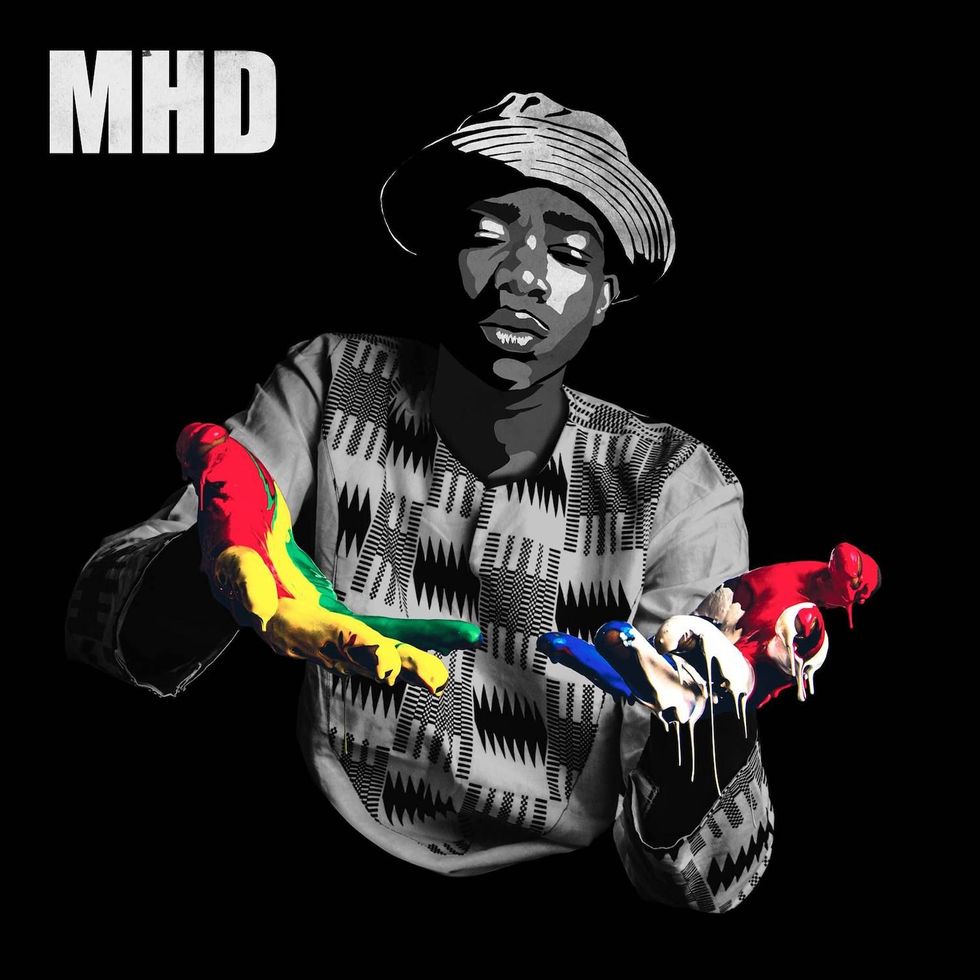 MHD proudly celebrates his roots by making West African-inspired "Afro Trap" music. His songs have over 80 million views and counting.

When MHD uploaded six homemade YouTube videos of of himself and his friends rapping about a year ago, he didn’t expect them to go viral.

All of them titled "Afro Trap," the videos have more than 80 million combined views and have lead the way for a new, off-shoot musical genre of the same name.

Mohammed Sylla—better known as MHD, a 21-year-old French rapper of Guinean and Senegalese descent who reps the 19th arrondissement—is its leader.

But why did Sylla name his music Afro Trap?

The answer is fairly straightforward, the hip-hop scene, the Atlanta-influenced "trap" one specifically, were crowded and MHD couldn’t stand out, despite putting out plenty of music and doing many collaborations.

Sylla wanted to innovate and felt like he wasn't thriving, so he steered his "trap" music to incorporate dance moves, following the likes of French rappers Attila and Niska.

MHD's Afro Trap is only very loosely inspired by American "trap" music. Rather, his style is more characterized by its heavy drums and layered synthesizers, and African influences in terms of the music, lyrics sung in West African languages and the choreographed dance moves associated with the tracks.

Sylla's style is clearly influenced by Afro-Carribean culture, less so trap music. One reason is that trap, as a genre, is geographically specific. Despite it’s worldwide appeal, it’s best output is still made in Atlanta by Atlanta rappers. The other reason is that "trap music" as a genre has simply become such a vague and overused term for any hip-hop music nowadays.

The fusion between Afro-Carribean music and modern hip-hop has been done before in the French pop scene.

Other rappers have tried the crossover, but MHD's the first one to go mainstream. A lot of that can be consistent Afro Trap branding he's plastered across all of the material he's released.

Sylla's light-hearted lyrics tackle his every day life—from football to love—like the song “A Kele Nta,” a Bambara phrase meaning, “My Brother, Just Choose Her." The music video follows MHD to Dakar, Senegal, where half of his family is from.

His debut album, MHD, rose to the number two spot in the French charts. The album features some famous names such as Fally Ipupa and Angelique Kidjo. Since then, MHD's also opened for French stars like rapper Booba.

The influence of MHD’s music has led to the mainstream recognition of others Afro Trap French rappers such as Naza, Gradur, and Nixo, a rapper from the island Mayotte known for his new single "N’golo Kante," a tribute to the French national team and Chelsea FC footballer.

As a new musical genre, Afro Trap is not clearly defined. It seems to be more of a catch-all phrase gathering hip-hop music made by mostly French Afro-descendants proudly celebrating their roots by making West African-inspired music with gleeful, lighthearted lyrics. Afro Trap tracks are sung in French, often featuring a few words borrowed from West African languages like Dioula and Nouchi (Ivorian pidgin).

West Africa being a muse for hip-hop music isn't a novelty, but for a generation raised on the negative stereotypes of the African continent portrayed by mainstream media, Afro Trap is a step in the right direction. The genre is created and made by second generation kids willing to loudly celebrate who they are: a mix of Western and African cultures and influences.

With MHD signing to Universal Music, does this mean that Afro Trap is about to blow up?

It’s possible. Although African-Caribbean-infused pop music has always been popular in France, many acts like Dealer 2 Zouk or Bisso Na Bisso have struggled to get past being one-hit wonders. French rapper Mokobé is one of the few that succeeded in having a career as a pop/hip-hop act.

Despite the complete lack of a political message in Afro Trap, many believe that the simple fact of having young Afro-descendants celebrating their culture of origins, is, by default, a political statement in itself. After all, Afro-Caribbean culture has, for decades inspired French pop, but never gotten paid its dues.

Afro Trap is a way for young Afro-descendants to feel represented in pop culture by celebrating a musical genre made with the sounds of coupé décalé, afrobeats and rumba, and words borrowed from their parents’ first languages. The dance moves are also of importance, because they help the public remember the lyrics and bring about a general “feel good” mood.

Afro Trap is created from the music, dances and sometimes languages of these rappers' parents—and made for everyone to enjoy. It’s time for Caribbean culture get the recognition it deserves in French pop culture. And Afro Trap is a way forward.