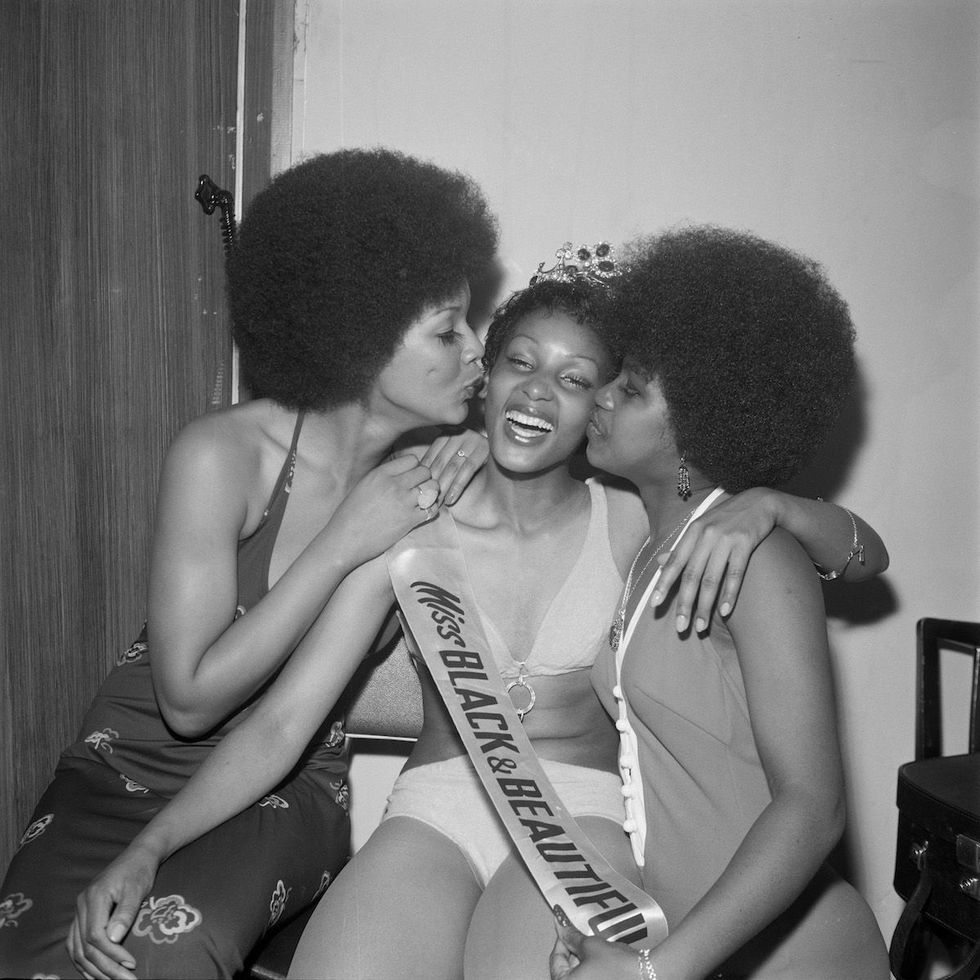 We spoke with Renee Mussai, the curator of Miss Black and Beautiful exhibit on until the 24th at the Autograph ABP in London, England.

Renee Mussai, is the curator of the Autograph ABP in Shoreditch, London—a museum with the stated mission of promoting black photography.

Its current and main exhibition—closing on September 24th— is "Miss Black and Beautiful," a selection of photographs by the great chronicler, Raphael Albert. Mr Albert photographed cultural events around London and aspiring models to build a portfolio, but the most notable are photos of the different beauty pageants he organised. This is the first major exhibition of his work since his death in 2009.

Mussai took some time to respond to a handful of questions we had about this phenomenal exhibit.

When did you first hear of Raphael Albert’s work?

In 2009 a former colleague of mine left a news clipping on my desk, from the Metro newspaper that she had read on her way to work that same morning. It was a miniature obituary for Raphael Albert, which mentioned briefly that he photographed black beauty pageants in London for three decades. Intrigued, I’ve kept it on my desk for a couple of years and eventually made contact with his family.

I have been engaged in the preservation and curation of Raphael Albert's collection of photographs ever since—an on-going project that began in 2011 made possible by a grant from the Heritage Lottery Fund to develop Autograph ABP’s Archive & Research Centre which addresses photography and cultural identity in Britain from the mid 1800s to the present.

In early 2011, we began working with two of Albert’s daughters, Victoria Albert and Susan Ibuanokpe, who temporarily deposited their father’s archive with us and supported the contextualisation process. The research aspect is on-going, and not yet completed.

What to you is special about Raphael Albert’s photography?

Albert’s photographs offer a rare insight into an ambiguous cultural performance at a particular historical conjuncture. Most importantly, the photographs in the exhibition offer a rare insight into an ambivalent cultural performance of gendered and raced identities at a particular historical conjuncture. As such, they serve as testament to a profound moment of self-fashioning and collective celebration in London’s pan Afro-Caribbean communities. His images are imbued with an exquisite, revolutionary sensuality and a certain joie de vivre, which I find refreshing and illuminating at the same time. Many of the models in Albert’s photographs embody an aura of hedonistic confidence in a new generation of black women coming of age in Britain during the 1970s, fuelled by complex cultural politics of identity, difference and desire.

Of those that were selected for the exhibition and those that weren't, are there any personal favourites of yours or any you find particularly memorable?

For me, the catalyst to curate the exhibition was one particular photograph in the collection, that has since become one of my all-time favourite portraits: not a beauty pageant photograph as such, but a portrait of a young woman named 'Holly', presumably photographed in 1974, at Raphael Albert's home studio apartment on Blythe Road in Hammersmith.

Several prints of the same model feature in the exhibition. In my favorite image, a large-scale black and white photograph, incidental damage on the negative appears as a series of psychedelic bubbles on the surface of the print, imbuing ‘Holly’ and her photograph with an ethereal, dream-like quality which makes her portrait even more exquisite, and enigmatic.

We found her name and image on a vintage poster from 1974, where she performed as a go-go dancer at an event that also featured the popular British reggae band Matumbi. And incredibly, Holly has since been in touch with us – having heard about the exhibition on BBC Radio 4’s Woman Hour !

Can you walk us through your curatorial process from when you decided to mount the exhibition up to when it opened in early July? What, if any, were the challenges or unexpected finds?

The sixty photographs in the exhibition were carefully selected from ten thousands of images - at the time uncatalogued, undigitised and largely rolled-up, uncut film material stored in boxes and bags for decades, a majority of the photographs are presented here for the very first time, and have never been printed before.

For this presentation, the artist’s first solo exhibition in a gallery or museum context, we decided to focus on the beauty pageants in the 1970s, and associated portraits of aspiring models in his home studio – although Albert's wider archive also includes a large selection of community photographs - christenings, weddings, family home portraits, as well as thousands of documentary images of performers and ‘club goers’, and other related cultural events.

The research aspect is on-going, and not yet completed – we are still captioning images, in the hope that we may identify further contestants and models by name. This involves archival research, looking at ephemera such as original adverts or event posters and inscriptions on vintage prints, as well as speaking with people who were around at the time and/or participated.

Could you paint for us the landscape of “black” photography in London of the 60s through to the 80s when Raphael Albert was productive? Who were his contemporaries?

This is impossible to answer in this framework. During the 1960s and 70s there was a small constituency of black photographers from primarily Caribbean background actively working in Britain. They included artists such as Armet Francis, Charlie Philips, Neil Kenlock who documented the British Black Panther movement or the filmmaker Horace Ové, as well as now celebrated Ghanaian photographer James Barnor, who photographed celebrities and fashion models for the anti-Apartheid South African Drum magazine during the ‘swinging 60s’ in London.

One could argue that Albert’s photographs offer a counter narrative to dominant photographic moments of the time, such as images of protest with raised fists locked in revolt, and other signs of discrimination and racial turmoil as often seen in the work of black photographers contemporaneous to Albert, such as Neil Kenlock and Armet Francis. Refreshingly, there are no signs of displacement or marginality, nor a sense of alienation in Albert’s portraits–his pageant images offer a different, and perhaps lighter, form of cultural resistance.

But it is equally important to remember that Albert’s photographs of the late 1960s and early 1970s were taken at a time of “No dogs. No blacks. No Irish” in a country irrevocably tainted by Enoch Powell’s 1968 “Rivers of Blood” anti-immigration speech, delivered only three years after the introduction of the 1965 Race Relations Act, the first legislation passed in the UK to outlaw racial discrimination on the grounds of colour, race, or ethnic or national origins.

Do we know if Raphael Albert meant his photographs to be exhibited someday, or were they strictly meant to document his different pageants for his own records?

Albert’s work was always intended for documentation as well as publication, and many of his images were published in local newspapers and his own magazine at the time.

In 2007, two years before his death, Albert co-organised a Black History Month display of his and other photographers’ work entitled Miss West Indies in Great Britain: Celebrating 30 Years of Beauty Pageants (1963-199) at the Hammersmith and Fulham Information Centre. As I understand from his daughters, it was indeed an ambition of his to present his work in exhibitions, and see it published as a book.

Is there a real difference between photographs intended for an exhibition when they’re taken, and those that are, at first, intended for personal records but are later shown to the public?

Very few images, especially in those days, were taken with the explicit agenda to have them exhibited. I think we must remember first and foremost, that we always view images from the standpoint of the present, and retrospectively attach meaning and context to them. Albert was a trained photojournalist, so while many of the photographs in his archive were indeed taken for personal records – such as his home-studio portrait photographs for local families, wedding or christenings portraits, which we deliberately did not include in this showcase – the beauty pageant portfolio constitutes a public record intended to be seen, and appreciated publicly.

Beauty pageants have endured and even thrived over the years despite accusations of objectifying women. But for the women who partook in contests like Albert’s, the platform and publicity afforded them were empowering especially in the London of the 60s, 70s and 80s. How do you negotiate these two arguments? Can they co-exist - objectification and empowerment?

Absolutely—one of the key arguments for me with regards to this project is about freedom: the freedom to choose to display one’s body in this context, to perform femininity and beauty in a way that is empowering, and inspiring.

It is of course important to see or read these photographs within a 1970s Black British context, a time and place where black women were largely invisible within mainstream arenas of ‘beauty’. Raphael Albert established dedicated black pageantry in order to create a distinct space where black women were able to both occupy and own the idea of ‘beauty’ for themselves, and without the need of conforming to Eurocentric ideals.

Fascinatingly, speaking of empowerment, one of the first people to stage a black beauty pageant was political activist Claudia Jones, who incorporated a beauty competition featuring twelve West Indian contestants in her first London carnival in 1959 – ten years before Albert first launched Miss Black & Beautiful, which celebrated the global ‘Black is Beautiful’ aesthetic of the 1970s in a local west London context.

Yes, amazingly several models who feature in the exhibition have come forward during the past couple of months, and we have been busy annotating the caption sheet with names and details. It’s been truly astounding to see the positive reaction and support for the exhibition. We will host a closing reception on the last day of the exhibition on September 24th, bringing together some of the former beauty queens and contestants for an informal conversation and ‘re-union’, if you will.

For me, in many ways the beauty pageant context is only incidental in the wider narrative – more important is the fact that out of the sixty plus frames on the exhibition walls, every single one of them is occupied by a black woman, each beautiful and different in their own right, a deliberate curatorial decision. That is something one rarely encounters in a contemporary art gallery.