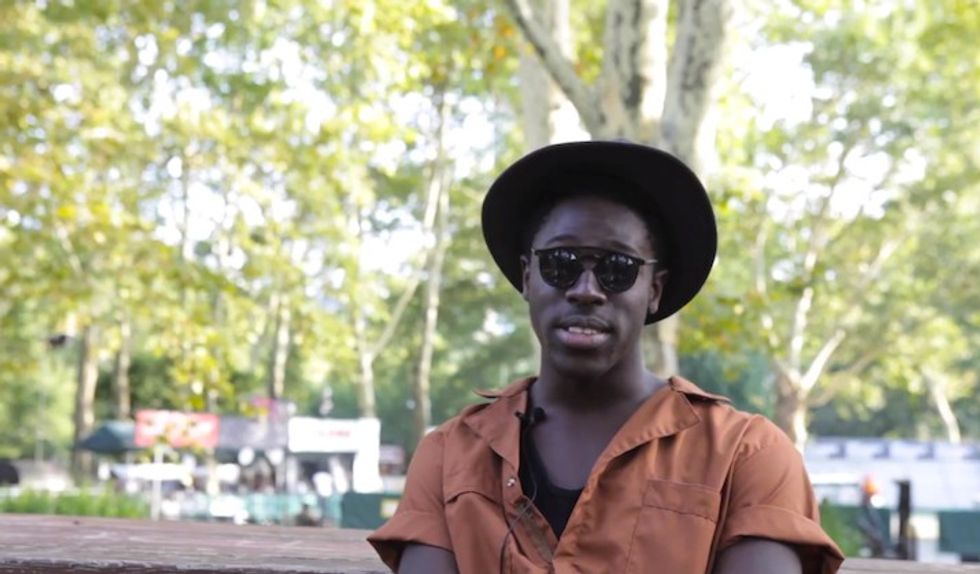 Moses Sumney talks his creative process and more in an interview live from Central Park SummerStage with Okayplayer TV.

Solidifying his crowning as an Okayplayer Top Artist to Watch, L.A.'s self-taught wonderband Moses Sumney concquered our hearts in two big strides early on this year. First there was his reputation for superhuman DIY performances, which we were fortunate to confirm firsthand. Second there was the release of his Mid-City Island EP, a four track (plus an outro) experiment in dreamy ballad-making recorded in Sumney’s bedroom. Since then, Sumney, who spent part of his childhood in Ghana, has gone on to tour with L.A. indie gods Local Natives (who he recently coveredLittle Dragon with), feature on (or rather, open up) Beck's Song Reader album/project, and play in Karen O's band at her Crush Songs solo shows last month. Well on the path to a storybook summer, Sumney joined our Okayplayer fam (along with Blood Orange) at Central Park to close out our five-concert SummerStage series. Ahead of his performance (which he began as an autotuned gospel choir of one), Sumney spoke to Okayplayer TV about his creative process (honesty is most key, he says), his summer of solitude in Asheville, North Carolina, and more. Watch the full interview below. For more from SummerStage watch Okayafrica TV: Black Coffee, DJ Spoko & Electrafrique at Okayafrica's South African house bash.