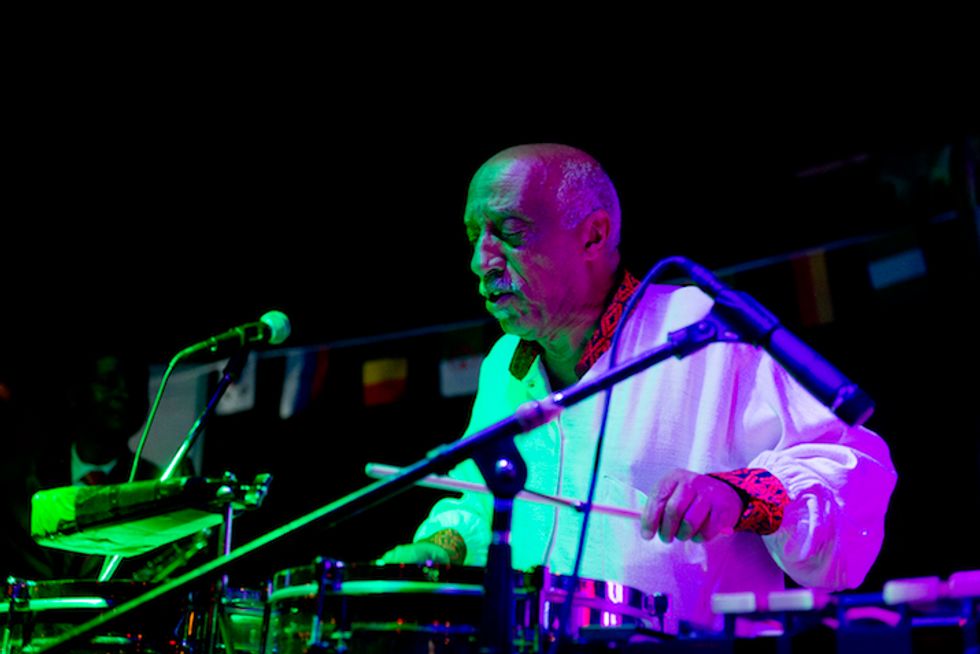 We break down the 5 best samples of Mulatu Astatke's Ethio-jazz in hip-hop, featuring tracks from Nas, Damian Marley, Cut Chemist and more.

At 72 years-old, Mulatu Astatke is a walking legend.

Known as the pioneer and inventor of Ethio-jazz, Astatke sparked a musical revolution by pairing jazz with traditional Ethiopian melodies and instrumentation, as well as Latin rhythms.

Standing over the timbales, conga drums and, of course, the vibraphone—instruments that he introduced into Ethiopian popular music—Astatke can still be caught playing on any given night at Addis Ababa's African Jazz Village or across the globe. He recently played at New York City's Met Museum.

“As you know, all these rhythms we're talking about were born in Africa. And I'm an African. You have to listen to the combination of this music. We have five notes and four different modals in Ethiopia. That's what I have used [for Ethio-jazz]," Astatke told Okayafrica in an interview from last year.

As those Ethio-jazz sounds have spread across the world since their inception in the early 1970s, they've become cult favorites for beat heads, producers, and MCs to chop-up, sample and rap over.

Below we focus on the 5 best Mulatu Astatke samples in hip-hop.

Nas and Damian Marley sampled Mulatu Astatke's 1972 track “Yègellé Tezeta" for their hip-hop-meets-reggae joint album Distant Relatives. The pair used the bass line, high-end melodies and pretty much most of the other elements from the original as they trade bars that touch on themes of ancestry and the plight of African states (the album includes song titles like "Africa Must Wake Up").

Nas and Damian Marley can be heard delivering lines like, "Y'all feel me even if it's in Swahili / Habari Gani / Mzuri Sana / Switch up the language and move to Ghana," throughout the song. It's not Amharic but the Ethio-jazz sound of the beat is definitely there.

“Gubèlyé" Sampled by Oh No

In one of its standout tracks, “Juke Joint," the California-based producer flips what's originally a serene and somber composition from Mulatu Astatke (1974's “Gubèlyé") into a spell-binding head-nodder.

“Kasalefkut-Hulu" (1972) has been sampled countless times—it's been used by Wu-Tang affiliate Killah Priest, it's heard on a song that features Mystikal and Master P and a later version of it can be spotted in K'naan's “ABC's" and Four Tet's “Parallel Jalebi."

Our favorite though has to be its use in J-Live's “Longevity," as Mulatu Astatke's undeniable vibraphone melody is contorted into the perfect sonic bed for the New York MC's lyrical finesse. The Sister Nancy, MC is my ambition, sample doesn't hurt either.

Mulatu Astatke collaborated with London-based musical collective The Heliocentrics on the 2009 album Inspiration Information, Volume 3. A few years later, Brainfeeder producer Gaslamp Killer transformed Astatke & The Heliocentrics' “Addis Black Widow" into the haywire blend of distorted beats and chiptune keyboards heard in "Impulse," a track featuring Daedelus. This could be Ethio-jazz for a dystopian future.

The high melodies from Mulatu Astatke's 1970 track “Emnete" are expertly chopped-up to accentuate this beat from Cut Chemist (heard around the :57 second mark). The veteran DJ/producer, a former member Jurassic 5 and Ozomatli, used the sample in “East Side," a track from his 2010 Sound of the Police, which also features a host of other Ethiopian-inspired beat work.