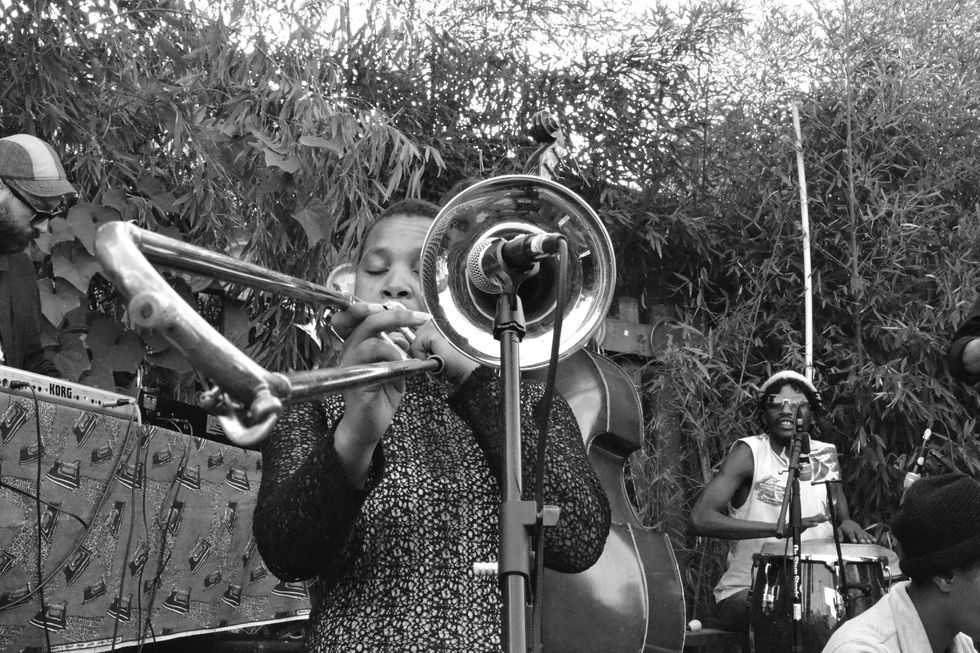 It’s one of the warmest days in autumn of 2015. Typical mid-year Joburg weather where standing in the shadows is hellishly cold, so we thaw in the direct sunlight. Picnicked in the garden of a makeshift art gallery in the bohemian part of the city, a group of people mainly from Jozi’s artsy scene sit about waiting for the show. Unsure of what to expect, we find reassurance looking at the unlikely band of mismatched musicians and artists gathered in front of a downing sun.

On stage at Spaza Art Gallery in Troyeville, sound artist João Orecchia plays with synthesizers, vocalists Nosisi Ngakane and Siya Makuzeni––who is also a trombonist and this year’s Standard Bank Young Artist of the Year for Jazz––experiment with their ranges, while bassist Ariel Zamonsky and graffiti artist/beatboxer Breeze Yoko provide the bassline and flare. Other musicians like violinist Waldo Alexander, percussionist Gontse Makhene and Nonku Phiri add to the day’s musical genius.

Nothing is rehearsed as the sounds come together perfectly. And sometimes not so perfect. But this gathering, presented by Joburg-based audiophiles Nhlanhla Mngadi and Andrew Curnow, is a celebration of the collective and the arts, underpinned by Mngadi and Curnow’s love for music.

This Lab Session at Spaza Gallery was one of many improvised jams that popped up across South Africa––and in Ghana––bringing together notable artists, from musicians to poets, to create original recordings of genre-bending beats.

Mngadi and Curnow run an experimental music imprint, known as Mushroom Hour Half Hour, which came to be following an inspiring psychedelic trip and their pirate radio show at Invisible Cities Radio (ICR) coming to a close as Jeppestown underwent gentrification. The building housing ICR was getting sold as part of the now shiny Maboneng precinct and the two found themselves without a base, later deciding to set up a mobile recording studio.

Since 2014, they've taken these curated sessions to the homes of poets, streets of ikasi and venues such as galleries around Joburg. Recording and documenting some of the country’s most renowned poets, such as Lesego Rampolokeng and Bra Ike, and musicians like João and Nosisi, Mushroom Hour have presented soundscapes created from scratch, while also digging into the archives (musical and video footage) to create postmodernist mashups that border on avant garde and straight-up funk.

With the launch of the official Mushroom Hour website last week, experimental music in South Africa has a new home.

In a sea of vinyl mixes and auditory experiments on the platform, one of the sessions that stands out from their Word on Wax series is a live recording of Joburg wordsmith Makhafula Vilakazi whose poetry is blended with vinyl-based music. Taking place under a gazebo at the Votos Logos Car Wash in Spruitview, a favourite hangout of Vilakazi, the almost two-hour long session is laced with his fiery-tongued raps and Curnow’s selection of musical gems.

“Your children are drowning with guilt in an ocean of our black mothers’ sweat/ They are drowning with guilt in an ocean of African tears,” Vilakazi rhymes in De La Rey, his poem named after Second Boer War general Koos De La Rey. In a video edited by Mngadi, which takes archival black and white footage from events at the Voortrekker Monument in Pretoria, Vilakazi speaks to the descendants of De La Rey. He calls on the general, a “Jesus with a gun,” to “Come take your children back to the sea” and “free their conscious from the silent graves of the children of 1976” and other events that led to the bloodshed of black people during South Africa’s colonial past.

Timeously launched on the 40th anniversary of the Soweto Uprising, Mushroom Hour also commemorates the students of 1976 with a compilation titled 40 Years | June 16.

Looking to the future, Mngadi and Curnow say they’ll release the Spaza Gallery installment and other sessions like these, plus curate more Lab Sessions in the form of album recordings.