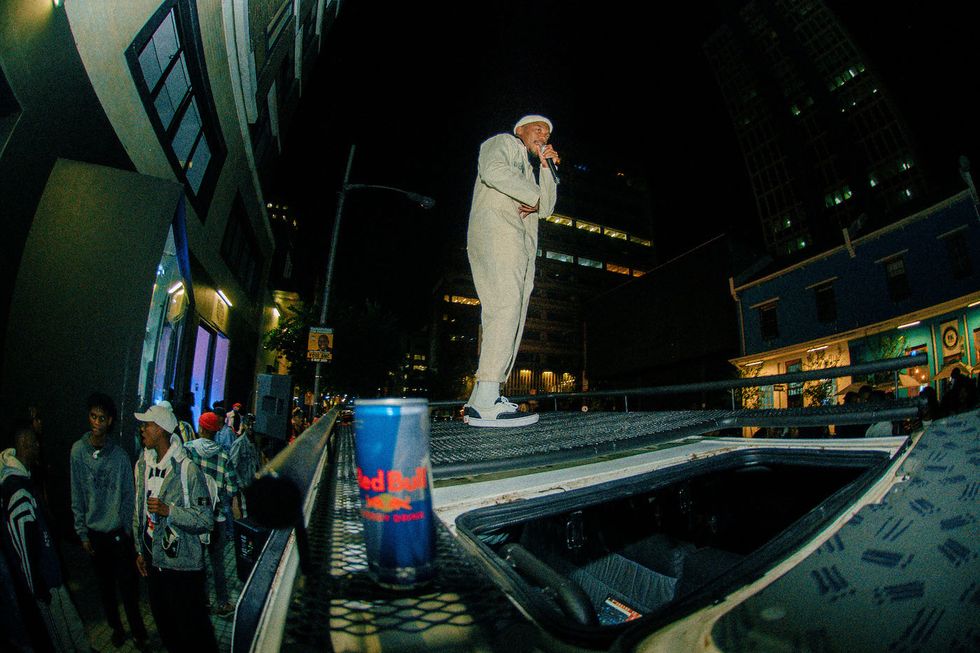 "It's real and sensitive, but I wanted to talk about it and remember it while entertaining in an honest way," says Muzi.

South African producer and artist Muzi is, in his own words, genre nonconforming. His bases are EDM and hip-hop, but he always makes sure to sprinkle elements of vintage South African genres in his music. In his debut album, 2018's Afrovision, the artist explored more Afrocentric sounds alongside the customary synths and bass lines that characterize electronic music.

In his latest EP, Stimela SeGolide, Muzi tells the story of his grandparents throughout the project's four songs.

In the apartheid era, black men were forced to leave their homes in rural areas to work in the mines in Johannesburg. This meant they would not be able to see their families for a long time. Some men ended up starting other families in Johannesburg, where they spent most of their time. Things got complicated, families and all kinds of relationships got broken.

In the four songs on Stimela SeGolide, Muzi tells a few bits of the story that could be of a majority of our parents, grandparents and their predecessors.

"The lead track 'Stimela Segolide,'" says Muzi, "is from my mother's perspective and there is a track ('iNtombi') about a distant love; how a relationship must work when one partner is far away grinding and how that leads to men building new families in the cities that they work in. The final track ('Baba') is about forgiveness; when you know you won't get that apology from an absent father, but you must forgive in order to move on. It's real and sensitive, but I wanted to talk about it and remember it while entertaining in an honest way."

To get you even closer to the story, Muzi borrows from the music of the '70s and '80s, years during which apartheid was in full effect. While most of the production is electronic-leaning, you'll pick up traces of maskandi, mbaqanga, isicathamiya and even bubblegum in his vocals.

The story continues visually. Firstly through the EP's cover art. "The artwork," says Muzi, "which is a painting by Lulama Wolf depicts, how women had to sustain the home engine while men were away mining in Johannesburg and other big industrial cities. There is a family engine that the man thinks that he is pushing by sending money home, but the real family building is being done by the women left behind. So, that's where that comes from and shout-out to Lulama for highlighting that in her creation."

For the release of the EP, Muzi did a conventional listening session and then physically took to the streets to perform the project, through a four-day pop-up store in Braamfontein and four-day mobile pop-up store in Pretoria and other parts of Johannesburg. The stores sold merchandise items in which Muzi collaborated with the brand DEAD.

"It's the story of my grandparents," says Muzi. "My grandfather used to wear a one-piece overall to work and that's where the idea to make overalls with DEAD came from. So, it's largely inspired by what my mother told me about her parents; her dad was far away working and her mother was a domestic worker and raising white children while her child was at home. I thought it was important for me to share that, as I feel like SA artists don't share enough of our stories due to the shame of our past."

The animated music video for "Stimela Segolide" was created by rapper and all-round artist ByLwansta. The video tells the story pieced together by the EP's four songs. It's a visual poem, showing the train trailing to the City of Gold and the miners digging up in the mines.