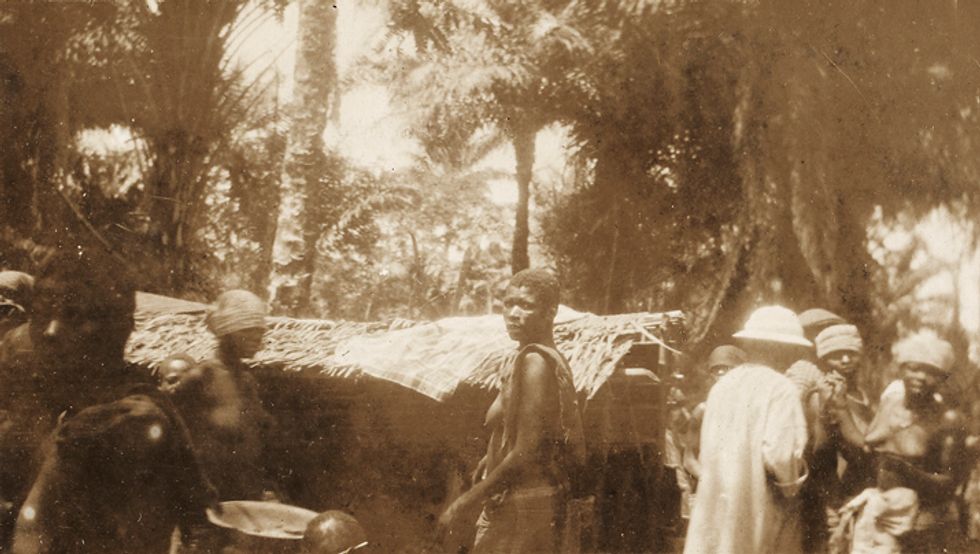 Naked protest, the work of activist group FEMEN and other forms of African Feminism are explored.

**See info for photo below text

Over the last couple years, the Ukrainian women’s group FEMEN with branches across Europe, North Africa, and the Middle East has grabbed headlines for its members’ nude protest actions. As Maryam Kazeem pointed out in a previous piece, African women staged their own naked protests throughout the twentieth century, most famously during the 1929 Women’s War in southeastern Nigeria, and continue to use nudity en masse as a weapon in their struggles down to the present. The point is not simply that sub-Saharan African women have engaged in similar tactics and have done so over a long period. Rather, this parallel history illustrates that African women’s collective action—and by extension African feminism—emerged from relatively distinct roots and routes, and cannot be reduced to a derivative or imitation of Euro-American models.

While denouncing the violent threats leveled at 19-year-old activist Amina Tyler after the Tunisian FEMEN facebook site posted topless pictures of her (in one, she is seen holding a cigarette with the words “My body belongs to me, and is not the source of anyone’s honor” in Arabic written across her torso), many Muslim and women of color feminists critiqued the group’s seeming appropriation of North African women’s bodies for a western feminist agenda as an instance of cultural imperialism. Most recently, FEMEN declared April 4 “International Topless Jihad Day,” and female protesters bore their breasts in front of Tunisian embassies across Europe, inciting a new round of debate over the group’s pronounced anti-Islamic rhetoric.

Invocations of the “white (wo)man’s burden” have a long history, and comparable examples of women of the global north attempting to intervene on behalf of their less fortunate brown and black sisters abound. The plight of African women and women of African descent outside of the continent has been the target of many such efforts. Yet, whereas Westerners have portrayed Muslim women as excessively covered and in need of unveiling (and continue to do so), they historically denigrated African women for wearing too little clothing while obsessively reproducing images of black female nudity. African women’s activism developed within the context of analogous but qualitatively different justifications for their subordination under colonialism, the legacies of which persist to the present day.

The Women’s War of 1929 is instructive here. In late 1929, an uprising of tens of thousands of largely Igbo- and Ibibio-speaking women rocked the British colonial state in southeastern Nigeria. After an initial victory at Oloko, the movement spread with lightening quickness, mobilizing women across a huge swath of territory as well as linguistic and confessional divides. In successive actions, women protesters utilized existing communication networks and employed established strategies of public shaming, including occupying public space, dancing, singing ribald and abusive songs, and exposing the physical markers of the status as guardians and reproducers of the land and its inhabitants. But they did so on an unprecedented scale to confront an unprecedented threat in the form of foreign commercial interests, British colonizers, and their African male representatives. And they went to great lengths to demonstrate that they acted collectively as women, perhaps the most extraordinary aspect of their movement. The women warriors insisted that they were Ohandum, the “women of all towns” or the grand collective of mature women and mothers of the land. At Opobo, the site of one of the largest demonstrations, they put forward emissaries representing six different communities to negotiate with the District Officer before British officials and native troops from Northern Nigeria fired upon them, killing dozens if not more. The mass mobilization of African women qua women addressed new threats to their shared interests, their existence, and by extension that of the community as a whole within a dramatically alternative landscape. Against the latter, something like an indigenous feminism took shape. It relied upon the innovative use of extant resources and tactics to revolutionary ends. While British colonial officials characterized the women as grotesque and sexually available, even prostitutes, the latter presented themselves as caretakers of a community of past, present, and future generations through the medium of their exposed bodies.

A fixation with naked African women remains a prominent feature of Euro-American press coverage of the continent. In a recent satirical piece published in Granta, “How to Write about Africa”, the Kenyan author Binyavanga Wainaina offers the following tongue-in-cheek advice to Western journalists: “Among your characters you must always include The Starving African, who wanders the refugee camp nearly naked, and waits for the benevolence of the West. Her children have flies on their eyelids and pot bellies, and her breasts are flat and empty. Describe, in detail, naked breasts (young, old, conservative, recently raped, big, small) or mutilated genitals, or enhanced genitals. Or any kind of genitals. And dead bodies. Or, better, naked dead bodies.” Wainaina tellingly genders this prototypical African female. In the face of such graphic portrayals of failed motherhood, as he explained in a subsequent interview, the implicit message is: “Now it’s the [African] child who needs your breast.” This representational trope not only reduces Africa and its inhabitants to hapless victimhood but also erase the autonomous growth and long history of purposeful, collective action on the part of African women. In literally offering their breasts to supposedly downtrodden Muslim women, FEMEN activists stand in a tradition of white colonizers, missionaries, philanthropic bodies, NGOs, and, yes, feminists, whatever their intentions and however eccentric their chosen form of protest may appear in comparison to these other actors. Too often, African and women of color feminisms appear as either lesser derivatives of a supposedly original Euro-American feminism or so utterly different as to not merit the label “feminist”. Meanwhile, women in Nigeria, Kenya, Uganda, Togo, and elsewhere continue to use their bodies to oppose the predations of parties as diverse as Euro-American oil companies and multinationals, scientists and nature preservationists, local police, and other men in their communities—often effectively. But their protests rarely appear in media outlets in Europe and the United States, and when they do, only as exotic and unintelligible (if titillating) outbursts of despair.

**I looked for years for photos of women during the Women's War that were rumored to exist, but never found any. Several sites on the web like this one use the same image. Wiki uses it as well for it's entry on the "Aba Women's Riots" (the term the British erroneously used for the women's movement) and says its from 1937. That seems about right, but who knows with wiki. In any case, here is the photo (at the top of the post). It's from the Library of Congress's archives. The photo is not from the Women's War either, but it is from the region involved, and we loved the way the woman is returning the camera's/colonizer's gaze.