Queen Of Glory: Ghanaian-American Actress Nana Mensah On Her New Film & The Rise Of The Weird Girl 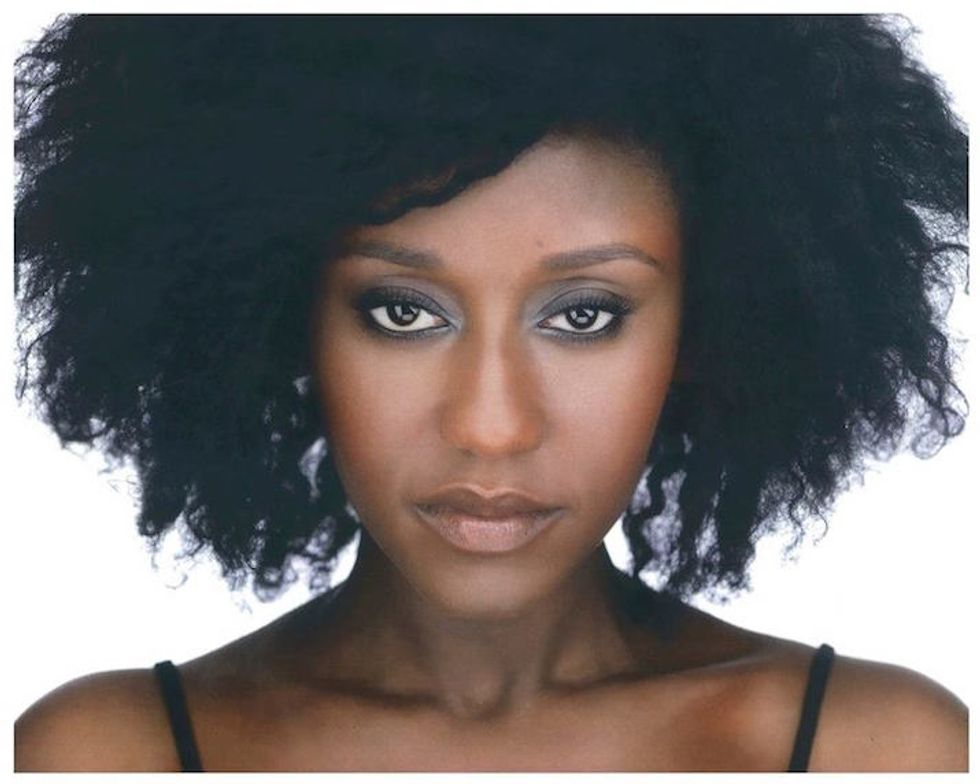 Ghanaian-American actress Nana Mensah speaks on her debut feature film 'Queen Of Glory' and the rise of the weird girl.

Nana Mensah is a Ghanaian-American actress, director, writer, singer and all around renaissance woman who we first got to know as the fiery Sade on the web series An African City. Over the last thirty months, Mensah has been hard at work on her first feature film, a dark comedy called Queen of Glory, which she wrote, directed and stars in. In the film, Mensah plays Sarah Obeng, a young PhD. candidate who is also a "weirdo, adulteress, binge-eating, grieving-but-not-dealing, Ghanaian-American genius who is slaying at academia, but failing at life." For Mensah, a self-professed weirdo, her latest role is an opportunity to tell the story of a black woman from an African immigrant community who finds herself pulled in different directions as she tries to develop and honor each aspect of her identities. We recently caught up with Mensah to talk about her artistic process, Hollywood's diversity problem, and the impact she hopes to make with her forthcoming film debut.

Jen for Okayafrica: Can you tell us a little bit about your acting background?

Nana Mensah: So I have been acting professionally since right after college, and I attended the now defunct conservatory at The Actors Center [in NYC]. I then hit the pavement pretty hard and started mailing in my headshot, attending cattle calls, and stealing breakdowns to find out about parts.

OKA: You star as Sade in the web series An African City, which has gained a massive online following since its debut a year ago. Has your life changed in any major way since then?

Mensah: Oh, certainly. I’ve been recognized and asked for my autograph, which is nuts. I’ve been offered other film roles (like the role of Asantewaa in Shirley Frimpong-Manso's Love or Something Like That), and have gotten a lot more creative freedom by way of pitching to write on other projects. As an actress, I think it certainly provided a platform to introduce me to a larger audience, so I definitely consider it a blessing!

OKA: In your new film, Queen of Glory, you play Ghanaian-American PhD candidate Sarah Obeng who is blindsided by her mother’s death and has to take over her family’s Christian bookstore in the Bronx. What was your experience like filming in the Bronx, the epicenter of New York's Ghanaian immigrant community?

Mensah: [laughs] It was GREAT! My family is up in the Bronx, so it was wonderful to connect with them and feel their support as they rallied around me to help make this project happen. Outside of family, the Bronx denizens were wonderful about us taking over their turf-- we got them to do cameos and work as extras and background actors. It was really cool. There were many moments of reconnecting to my childhood, particularly when we shot scenes at the halal butcher shop-- that used to scare the hell out of me as a kid going with my mother!

Photo courtesy of 'Queen of Glory'

OKA: In the Kickstarter campaign for Queen of Glory, you talk about the dearth of nuanced roles for women of color, and black women in particular, who are often relegated to play roles like "Sassy Fat Bank Teller," "Smutty Crack Hoe #4," or "D Girl." Enter Sarah Obeng, a Ghanaian-American woman who is the antithesis to Hollywood’s racist casting calls. When did she start to take form in your head and how did you flesh her out?

Mensah: Ha! Well, an acting teacher once told me that a way to understanding a character in a multidimensional way is by figuring out who she loves and what makes her laugh. I think that really resonated with me and that was how I approached Sarah’s construction-- what does it say about her that she’s in love with a man who is married with children? And that she’s leaving her PhD program for him? What does it say about her that she’s holding her grief buried inside so that it erupts in caustic surges of dark humor?

OKA: Beyond their Ghanaian-American upbringings, would you say there any parallels between Sarah, Sade and Nana?

Mensah: Ha! Good question. I think this means I have to talk about myself in the third person, which I’ve always wanted to do in an interview. Okay, I think Sade, Nana and Sarah all pride themselves on their intelligence-- though all three have varying kinds: basically, Sarah and Sade have high IQs, but low EQs. Nana has a moderate IQ and high EQ. So I think Nana likes to write characters that play on the other side of the fence, who don’t care so much about what people think of them, who are unapologetically themselves.