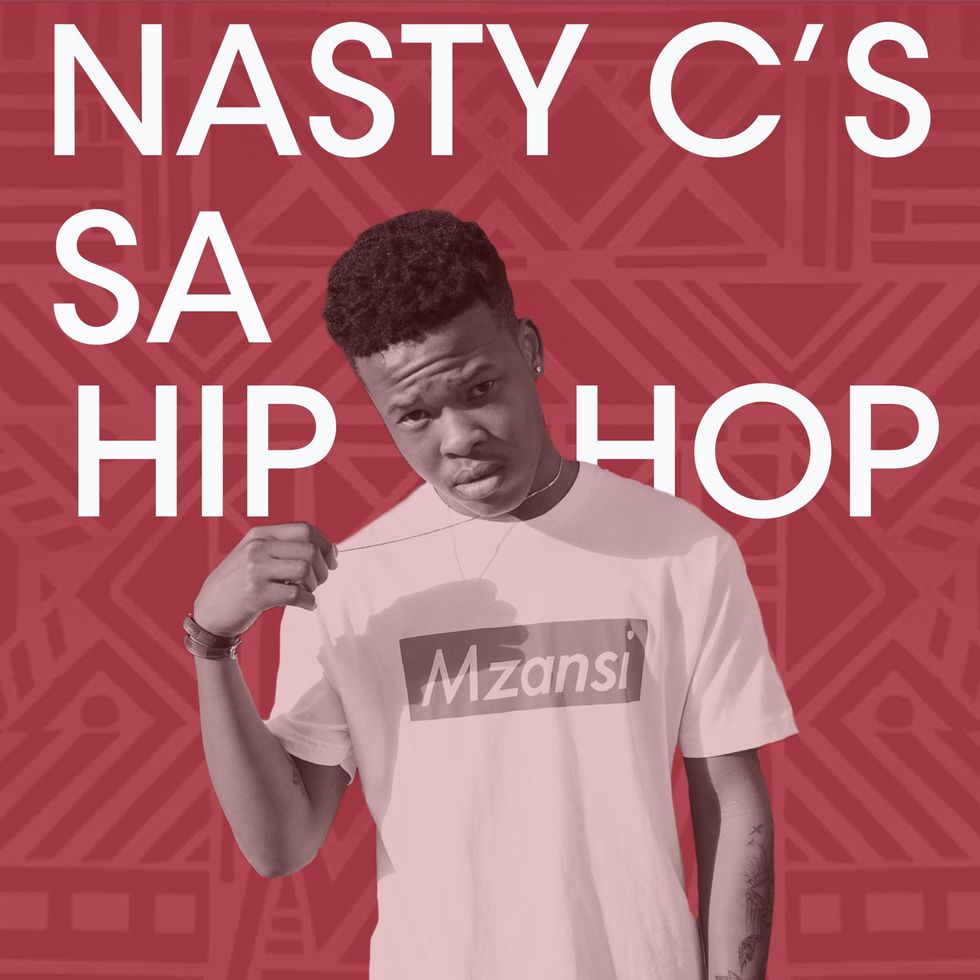 Through his highly-impressive debut album, Bad Hair, the many features, EPs and mixtapes that came before it, as well as collaborations with some of the country's biggest names—like Tumi Molekane, Cassper Nyovest, and AKA—the Durban-based act has cemented his place as one of Africa's fastest rising rappers.

Nasty C recently stopped by the OkayAfrica offices during his visit to New York City, the same day he dropped by Sway In The Morning.

We took the opportunity to ask him to select his favorite South African hip-hop songs.

Check out Nasty C's South African Hip-Hop playlist below and listen to it on Spotify and Apple Music.

Nasty C: This song speaks about not giving up and how Emtee came up. Me and Emtee are very close, I'm inspired by his hustle, all the stuff that he's been through, and what he's made out of himself by making music. There's a line from the hook that I really like: "Dreams do come true / You can win if you want to."

AKA & Anatii "Dont Forget to Pray"

Nasty C: They just dropped this one recently. I really like it. The beat and the hook especially are dope, and I really like Anatii's verse—he raps in Xhosa for a change, and he doesn't really do that at all, so I really felt that.

Nasty C: That was my first favorite from Cassper's first album, Tsholofelo. Anatii's on that song as well. It's all about the vibe—I think they were very experimental in that song, 'cause they were just playing around. It was dope.

Nasty C: Da L.E.S did this songs with Gemini Major. Gemini and I are really close, he's a producer, who I think also made this beat. Again, I love the production and Da L.E.S' verse.

Nasty C: One of my favorites from the Bad Hair album. There's two beats here, actually, cause I split the song into two: spitting about good girls then Snapchat hoes. It doesn't really focus on good girls, but how guys like to praise and hang around bad girls 'cause they do all the cool stuff. In the second part I pretty much bash the bad girls and expose them.

Nasty: Citi Lyts did this one with Emtee, Fifi Cooper and B3nchMarQ. I like the vibe of the song. "Washa" is a term Zulus use that sort of means "that way." You know how people say "that way" to anything, you can pretty much say "washa" to anything. Like if something cool happens you say "washa." People say that a lot when they're dancing.

Nasty C: He speaks about his mother and him having to see her go through so much. Her being in the hospital and him still trying to make it, not really having much at home but he still has to take care of his mother and his siblings. It really resonates with me, because I do everything I do right now for my mother and I didn't know her much, she passed away when I was young. So when he speaks like that, he shows how much he loves and appreciates his mother. I think that's really dope.

Nasty C: This song came out like 4 years ago, I was still in high school when I heard it. It's a really dope song. I think the video made me like the song more than anything. It was directed by Kyle Lewis, who also directed my "Good Girls" video. He's really abstract and goes crazy, his imagination and creativity are insane.

Nasty C: Kyle Lewis did this video as well, which I really like. What I like about it is that I made the beat and the song for this one when I was in grade 11. That must've been like 4 or 5 years ago, but it still made it on the album. It's just one of those songs that I always kept on the side—never wanted to play it for anyone or release it. It was just so special to me. I was going through something at the time, and I expressed it through this song. If not the most liked song, it's probably the second most liked song on Bad Hair.