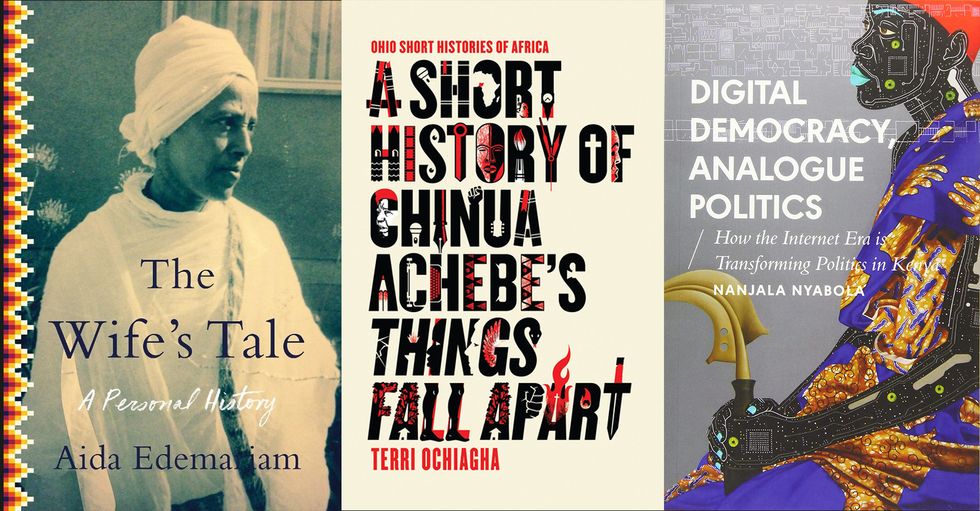 These books by black authors cover a range of historical events, eras and figures that highlight the rich history of the continent.

There are a plethora of books out there proclaiming to truthfully capture the continent's rich history, but they aren't all worthy of our time. In fact, many of the ones we grew up reading in school textbooks fall into this category. These often one-dimensional narratives did little to capture African's multifaceted history and were mostly told from a European frame of reference.

Books like these, however, don't represent the fullness of African historical text that does exist. Throughout the 20th century, scholars like Senegal's Cheikh Anta Diopand Ghana's Kwame Arhin produced works that added perspective to the African historical landscape. In a more contemporary sense, there are historians from Africa and the diaspora who are furthering this work and—though still largely underrepresented—many of these scholars are women.

READ: 13 of Our Favorite Books On Black Resistance and Revolution

In the past decade, black authors have taken to writing history that expands viewpoints, adding layers of nuance and authenticity to the field and offering critical works that experiment with format and examine eras, events, and figures from the continent's historical past. These books which cover a range of topics like the historical role of media in Kenyan politics to the aftermath of the Marikana Massacre in South Africa, explore lesser-known histories and extend beyond typical narratives.

If you're interested in becoming more familiar with these stories, here are seven recent African history books to check out.

"Things Fall Apart" is one of the seminal texts of African literature. It holds a unique place in the collective memory of many young people as it's one of the few books by an African author that is commonly taught as part of a Western curriculum. Sixty years after its debut, it is still being taught—in fact, it is the most read African novel of all time.

Despite its lasting significance and immense critical value, there hasn't been a recent analysis or historical take on the book that goes beyond the typical literary themes to highlight its unique role in the broader culture of African storytelling. This is where A Short History of Chinua Achebe's Things Fall Apart by London-based scholar and author Terri Ochiagha comes in. The book, which is her second dealing with Achebe's work, offers a refreshing critical lens to reexamine the canonical novel and its role in both shaping and transforming African literature on an international scale—all in one notably straightforward and concise package. The brief survey is part of the Ohio Short Histories Collection, which publishes succinct guides, biographies and more on important topics in African history.

Magema Fuze: The Making of a Kholwa Intellectual by Hlonipha Mokoena

This fascinating micro-history tackles the lasting legacy of cultural imperialism in South Africa and what it meant for Zulu culture and identity. South African author Hlonipha Mokoena introduces unfamiliar readers to the forming of the "Kholwa intellectual" who were the first-generation Christian converts often caught in a bind between being fully assimilated into colonial culture and holding on to Zulu traditions.

She does this through the story of the Kholwa author and historian Magema Fuze who wrote he first book written in the Zulu language by a native speaker, Abantu Abamnyama Lapa Bavela Ngakona (1922) which was translated into English in 1979 (The Black People and Whence They Came). The seminal book was somewhat of a love letter to Zulu identity, which Fuze hoped would resonate deeply with his people.

"Writing as an aspirant historian, Magema Fuze's literary life represents a black intellectual tradition whose potential was not realised," reads part of a summary via Barnes & Noble. "Beyond his work as a printer and scribe it is worth adding another role, namely that Fuze was a popular historian, who attempted to write histories whose intimate resonances would not only appeal to his readers but also rouse their nationalistic sentiments.

The Predicament of Blackness: Postcolonial Ghana and the Implications of Race by Jemima Pierre

Described by the Chicago Press as "the first book to tackle the question of race in West Africa through its postcolonial manifestations," this book examines the implications of the concept of "blackness" on the continent, using Ghana as a cultural backdrop.

Jemima Pierre, a sociocultural anthropologist and associate professor at UCLA, employs a more global understanding of race relations in her assessment and examines what a system of global anti-blackness means for Africa. Her work intentionally challenges the idea of a homogenous black identity existing on the continent that makes issues of race less pronounced than other social matters. Pierre grapples with complex issues around a "racialized" Africa in an attempt to identify what it means to be black on the continent. In The Predicament of Blackness, she uses Ghana as a microcosm for larger phenomenons happening across Africa, covering a range of topics from the prevalence of skin bleaching to concepts of whiteness in the country originating from its colonial past.

Marikana: A View from the Mountain and a Case to Answer by Peter Alexander, Thapelo Lekgow, Botsang Mmope, Bongani Xezwi

The Marikana Massacre of 2012 is known as the most deadly use of force by South African Police Forces against civilians in the 21st century. The killings were in response to demands from unions and independent miners to have their pay increased to R12,500 a month. The violence led to a total of 34 deaths, while 78 others were injured.

Marikana: A View from the Mountain and a Case to Answer, which was published the same year,offers firsthand knowledge of the event, through ten interviews with surviving strikers. Many of the interviews were conducted at the very mountain where the miners would meet ahead of the protest. It also offers a retelling of the events from the strikers' perspective, giving voice to those directly impacted by the violence, as well as detailed maps and photos of the area and the event that tool place.

The book goes on to discuss the aftermath of the massacre and the grave outcome of state-backed violence against citizens, using it as a vehicle to discuss the intersections of race and class in post-apartheid South Africa. "The book is an attempt to provide a bottom-up account of the Marikana story, to correct an imbalance in many official and media accounts that privilege the viewpoints of governments and business, at the expense of workers," says Jane Duncan the Highway Africa Chair of Media and Information Society at the School of Journalism and Media Studies, Rhodes University of the book.

The Wife's Tale: A Personal History by Aida Edemariam

In this multi-generational account of the life of her 95-year-old grandmother Yetemegnu born in the northern city of Gondar in 1916, journalist Aida Edemariam highlights several shape-shifting moments in modern Ethiopian history and its rapid transformation from feudalism to monarchy to Marxist revolution to democracy, which occurred over the course of just one century, as stated in a synopsis from Harper Collins Publishers.

Edemariam uses this biographical memoir of her grandmother's life to reflect on the social and political shifts that have occurred in the country, and their human toll. Yetemegnu lived though several transformative events in Ethiopian history such as the Fascist Invasion and the rule of Emperor Haile Selassie. This uniquely human story, offers a "panoramic" view of history as well as an intimate look into how such events have impacted not only the growth of the nation but also the personal, everyday lives of Ethiopians. Told from the often overlooked perspective of a woman, the book also tackles the role of gender dynamics on individuals' experiences.

"The Wife's Tale introduces a woman both imperious and vulnerable; a mother, widow, and businesswoman whose deep faith and numerous travails never quashed her love of laughter, mischief and dancing," reads the book's summary. "A fighter whose life was shaped by direct contact with the volatile events that transformed her nation."

Dreams of Africa in Alabama: The Slave Ship Clotilda and the Story of the Last Africans Brought to America by Sylviane A. Diouf

The story of the last slave ship to reach American soil is conveniently overlooked in the history of the transatlantic slave trade, but this book by Senegalese author Sylviane Diouf, brings this dark history to light. Landing in Alabama in the thick of night during the summer of 1860, the Ship Clotilda carried the last recorded group of enslaved Africans, who were trafficked from Benin and Nigeria into the United States completely unnoticed. This occurred nearly 50 years after slavery had supposedly been abolished, and was the result of a bet by a shipyard owner.

This book traces the group of enslaved Africans history, from their capture in West Africa to their lives as enslaved people alongside their American-born counterparts. The book also follows the group post-Emancipation, documenting the strong cultural ties that persisted despite their circumstances, and led many to purchase land and form their own settlement known as Africa Town, in which they spoke their own language and maintained traditional African laws.

This history is also explored in the posthumous New York Times Best Seller novel Barracoon: The Story of the Last "Black Cargo by Zora Neale Hurston, written in 1927 and sourced from interviews with Cudjo Lewis, who was 86 at the time and was the last person to have survived the slave trade.

This contemporary history book, documents Kenyan society's singular relationship with digital media and online activism. The country is considered one of the most connected and digitally advanced on the continent, with notably high numbers of Facebook, Twitter and WhatsApp users.

The digital space has birthed several online social movements, thus allowing for many Kenyans to find political agency online. Many users, particularly those from traditionally marginalized communities, have utilized social media as a valuable tool to challenge the governmental and to fight against censorship. In Digital Democracy Kenyan author Nanjala Nyabola assesses digital media as a form of protest and what it means for the country's political future, examining social media trends like "hashtag activism" and the political consequences of "fake news."

"Incisive, deft, and innovative," says Brenda N. Sanya professor at Colgate University in a review of the book. "This book describes viral trends and critically expands the scholarship on Kenyan politics while bringing the social histories of marginalized Kenyans into sharper focus,"