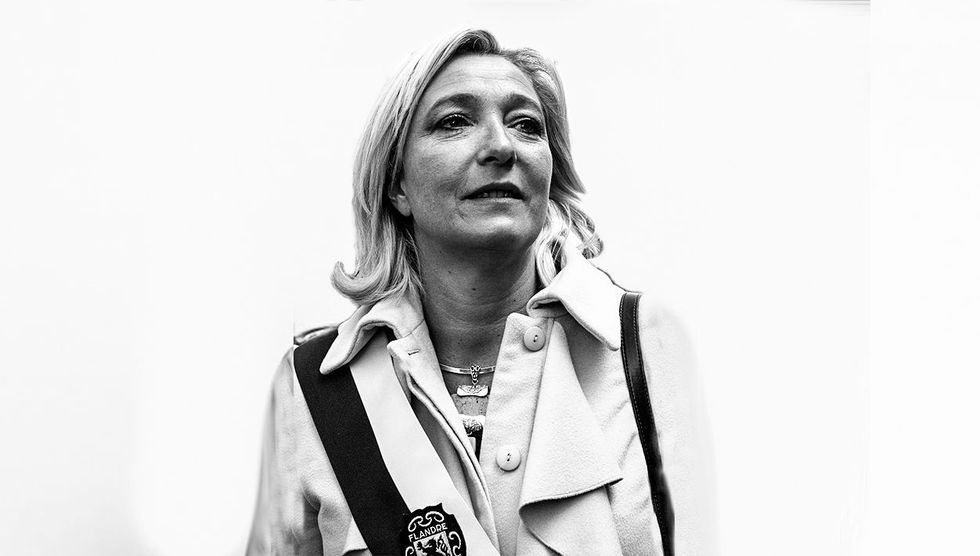 The National Front wants to send us back to Africa but writer Aude Konan still won't vote for Macron. Here are her thoughts on blackness and the French election.

PARIS—In April, 2002, Jean-Marie Le Pen, leader of French hard-right party, the National Front, got into the second round of the French presidential elections with a historic win, stunning the world. Later, in class, when our teacher brought up the subject a classmate wrote “Le Pen = raciste” on the wall. The teacher told him that this wasn’t the way forward. “Le Pen wants to send us all back to Africa,” he replied.

In 2002, shame, stupor and astonishment had taken over France. The media and politicians would repeat over and over again that the values of the National Front were everything the country stood against. To fight it they established the Front Républicain, an anti-democratic political maneuver that was nevertheless the best defense against fascism. The Front Républicain is a way for all the media and more importantly, the parties, from ultra left wing to moderate right to ask their partisans to cast a ballot for the candidate standing against the National Front regardless of whether the electorate actually wanted to abstain in the second round or simply vote for the National Front. This is how Le Pen, the father, was stopped 15 years ago.

"Le Pen = raciste"
In April 2017, non-voters and voters alike were shaken by a frenzy like no other. Everyone in Paris was talking about the elections—in the cafés, the metro and in the streets. I had a feeling that the result would be Macron-Le Pen in the second round, but I nonetheless did my civic duty and walked across my hometown to vote.The result of the first tour wasn’t much of a surprise anyway. Yet, I still felt a baffled amazement at the fact that in France, you could manufacture a brilliant “énarque” (administrative elite) into a potential presidential candidate. Throughout last year, Macron’s communications team had been on point. But so had Marine Le Pen’s. She finally did what her father failed to do—become trendy. She is the head of the original fascist party at a time when fascist ideas are being stolen by both the Socialist Party and the Conservatives (Les Républicains). And as Le Pen has said, “why vote for the copy when you can get the original?”

On the night of April 23rd, the atmosphere in Paris was tense. Only Macron was celebrating, while some parts on the city were on lockdown. Bastille was surrounded by cops and their cars. The area had been closed after an anti-fascist march passed through. The protestors wrote on the Bastille’s obelisk, “Ni patrie, Ni patron’—Neither motherland, nor boss. The heavily armed and prone to violence French police always feel very unsafe and scared, and this time was no different.

Outside a nightclub, a bouncer lifted a barrier, screaming that Le Pen would win the elections and send all black people home—even the French ones. I looked at him, stunned. The situation may have been ridiculous, but in the current political climate, it wasn’t far from the truth.

The feeling makes perfect sense considering the many times the FN has told us so. And one can’t simply expect the National Front to jettison this violent, hateful history if Marine Le Pen becomes president. After all, these fascists have attacked and killed people of color for a long time. And we all remember the death of Brahim Bouarram 22 years ago, thrown in the Seine by a group of fascists. His crime was to not be white. The law may say that it’s illegal to kill, threaten and deport non-white citizens, but when has it ever stopped fascists seizing power in a country?

Because the National Front has quickly risen to the status of a mainstream party and has been heavily portrayed in the media like BFM TV, the Front Républicain is less effective this time. Politicians such as Dupont Aignan have joined its side, like a bad French remake of Star Wars where everyone bows down to Darth Vader.

And far left politician Mélanchon refused to abide to the Front Republicain by giving voting instructions. And I understand him. Despite how dangerous the National Front is, I still can’t bring myself to vote for Macron. And I’m not the only one. A growing section of far left POCs, who have been holding onto the hope that if we kept voting left wing parties, they’d eventually cater to the problems we face, such as economic anxiety, housing issues in the banlieues, institutional racism, etc.

What we got was former president François Hollande deciding to erase the mention of race from our constitution. Does it mean that racism is over now? Yay!

Macron may be a newbie politician pretending to be again the system but he already has a heavy past in the system. As the former Minister of Economy, he was one of creator of the Loi Travail, a catastrophic French Labor law raising work up to 46 hours a week (instead of the 35 hours so many people have fought for in the 90’s) and allowing businesses to lay off their employees easily. His government benefited from the state of emergency and the infamous 49-3, allowing them to pass many laws without parliament’s approval. And our former president is one of Macron’s vocal supporters, to the point where many call Macron his successor.

Outside a nightclub, a bouncer lifted a barrier, screaming that Le Pen would win the elections and send all black people home—even the French ones
Macron’s programme is at best non-existent, at worst serving his neo-liberal agenda. He and I would definitely agree that it’s time that France sets itself firmly in the 21st century. However, doing it by making France a start up nation is not the way. I wouldn’t want that for my family and my friends who are already struggling to get by. For as many issues France has, the state has given its citizens a social protection through its welfare state. It is something we ought to protect rather than attempt to become more like the USA. Macron’s economic plan aims to make the economy more competitive by getting rid of the rigid rules around French labor and tax. In a neo liberalist economy, everyone is competing for everything.

But, first of all, not everyone is an entrepreneur or has the resources to sustain a living as self employed. Second of all, in a country with an employment rate of 10 percent, allowing businesses to hire more people through precarious labour contracts creates more job insecurity and leaves more working class people, many of them POCs at the fringe of the market of stable employment. And lastly, it renders the social cohesion of a country almost non existent.

Neo liberalism facilitates the rise of far-right groups by reducing the social safety net creating a wider gap between working class people and upper class ones, which is then blamed on on migrants. Macron’s election would save us from fascism now, but would very likely just delay the inevitable fact of the National Front taking power.

Hence, why so many French POCs have made the hashtag #PasUnCastor (a pun on the fact that we must bloc the FN by building a dam just like beavers). France remembers that French POCs exist every 5 years when it’s time for us to vote against the FN. Outside of this time scale we’re “paranoid” when we talk about racism or downright “divisive” (because of course, mentioning that something is racist means that we are, in fact racist, right?!). And the in-between period during the two rounds has showed how rancid and disgusting the campaign have been.

From media and people blaming the rise of fascists on left wing POCs who abstain to vote, regardless of the fact that people who vote for the National Front are the ones responsible for its high score, to white French telling us that we should thank them for their vote against Le Pen because without them we would be deported back to Africa, this presidential election has reached an abysmal low. Sometimes, it seems like white French who are not the direct targets of fascists like us POCs, only vote against the National Front because they’d be too ashamed if they take power in their beloved country. What a privileged position to have.

I felt a strange peace at the idea that Marine Le Pen had gone through the second round. When you know that the country you were born in is racist, sexist, xenophobic, islamophobic and homophobic, it’s not a surprise. I am not shocked or disgusted that my country has turned that way. The country has always been that way. France didn’t let me down on the 23rd of April, if has let me down since the very first day I was born—me and all the people who happen to be anything but white, christian or atheist at the very least. And if a majority of French people want to have fascists back in power, there’s only so much we can do to prevent it. The National Front is a cancer that keeps coming back again and again, always stronger. And there’s so much medicine we can take before the inevitable happens and the whole body gets contaminated.

If France is a democracy we have a choice. And we can make the choice of doing it outside of the ballot box.

My friends were shaken and I try to reassure them: it wouldn’t get better but we would fight. The fight would continue locally, among communities. Regardless of the results on the 7th of May, hope remains. First of all, the parliamentary elections are next, and we can vote for our local politicians, who can make a change. And outside of voting, we can get involved in charities and local associations, to support activists and local businesses run by POCs, to put pressure on our local politicians to get more social policies and to create schemes to create more employment opportunities for young POCs and many more.

French POCs don’t have the luxury to acknowledge fascism and racism every 5 years during the elections. We fight it everyday.