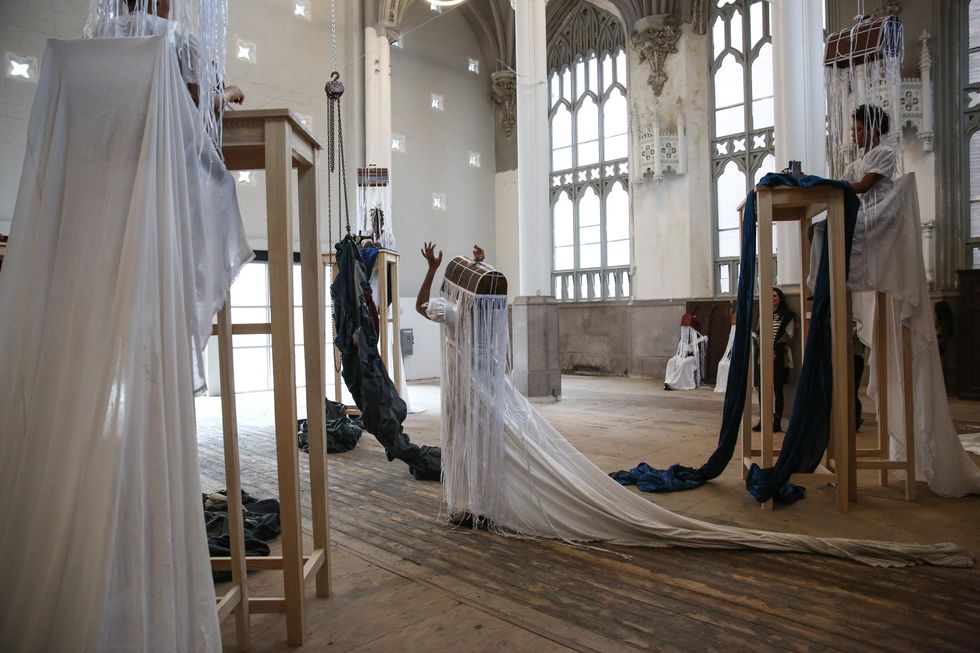 OkayAfrica catches up with the South African artist to learn the creative process behind his performance, umBhovuzo: The Parable of the Sower.

As I sat in the lofty space at Harlem Parish, where South African artist Nicholas Hlobo presented his latest work, umBhovuzo: The Parable of the Sower, I couldn't help but think of the 26 Nigerian girls, mostly aged 14 to 18, who drowned off the coast of Italy in November. A mass funeral was held in Salerno, Italy, the day before the performance, after their bodies were recovered from the Mediterranean Sea. The nine performers in Hlobo's work looked like their angels: all wore pristine, white cotton robes, and rings of light hung overhead like halos.

Hlobo created Parable of the Sower to reveal how detached we've become from our histories, and yet how powerfully our past thrusts us forward. Like the 26 girls whose dinghy capsized en route to a more optimistic future, his performers—some of whom labor on sewing machines for the entire performance—are working against time. They are trying to construct a new sense of self using contexts and materials formed by the past.

"If you think about sewing, we sow seeds in order to feed nations," Hlobo says, in conversation with Performa 17 founder RoseLee Goldberg later that night, in Soho. "And we continue sowing seeds, whether they grow to be destructive plants" or something more nourishing.

With the migrant crisis—where more than 20,000 people have died or disappeared since 2014—some critics argue that Europe's solutions have ignored its own role in history: the destructive, imperialist policies in Africa that contributed to the region's destabilization. Hlobo's work reminds us that the effects of our previous actions are never too far away: "The pains we have are influenced by people and things that have happened all over," he says. "But the people find themselves in that present, trying to maneuver themselves slightly better into the future."

Here, Hlobo talks to OkayAfrica about the power of engaging with our history, the role of American media in his work, and what he thinks about South Africa's future.

Amirah Mercer for OkayAfrica: You used local New York performers for Parable of the Sower. The one character, played by local performer John Deric, who was walking around and talking was very funny. Was that planned?

Nicholas Hlobo: I was really happy [with his performance], because I can't believe what he did. I started to cry.

Last year, when the performances were done, there was no sound. The only sound we had was from the sewing machines moving. We were told people can't go up to the mezzanine [of Harlem Parish]. But we can't have the mezzanine sitting unused—we needed to take ownership of the space! I told him, "You'll start your performance from the top and move to the ground and back to the top."

I asked him, "Can you sing?" He said no. I said, "Actually, I like that you cannot sing. Can you make noise? Like you do it in the shower?" He was shy, but I said, "Remember, when you're performing, people will see you, but they won't see through you, for they will not be able to see your eyes. You're wearing a sewing machine cover [over your head]. … It takes looking at one's eyes to be able to go into them."

I really enjoyed it. He even had a nursery rhyme around sewing!

He really, really surprised me dearly. I love how he worked with an artist who is alien, who is not from New York, who is not American. The only thing we have in common is our blackness, and I asked him to share into my portrayal of this story, as obscure as this story may be. But then he brought himself. He brought a greater part of him there. And I enjoyed that.

When you are creating for a space outside of South Africa, does that impact your work?

This performance was [originally] created for an exhibition in South Africa, and then came here. … But the media references, especially older media in South Africa, is always bound to come from America, Hollywood. The old movies portraying the suffering of the African-Americans, all of the people would be dressed in this beautiful cotton fabrics, that very fine cotton, like a cheese cloth. I found that to be very interesting, because what happened in other parts of the world is the same as what South Africans went through.

Knowing where people come from is very important, because if we do not know, then we are in oblivion and don't know who we are. And those who know will laugh at us, because when you know where you come from, that inspires a whole lot of things: ideas, industrial design, architectural design, even fashion. They always look back into the past.

If you're African now, what do you notice now? Some people are going back and keeping their hair natural. And referencing hairstyles from West Africa—from a long time ago—and when you look at those photographic documentations or illustrations, they're beauty and we're reviving that. This will help us reimagine the present and the future.

Like Solange's hairstyles! What do you think of the new global lens that's on South Africa?

I live in Johannesburg, and I find myself within a city that is trying to find itself as well as the country, and I'm bothered by the change. What I say to people back home: you wake up sometimes and you don't even know where you live, because the politicians have decided to change the street names.

I'm interested in street names, because it's still very fresh from apartheid, and people are trying so hard to erase it, which I feel is foolish. You cannot erase it by changing street names—that doesn't change a thing at all, you're just changing names. In fact, the best way to try and rub it off is to name them after plants or mountains, nothing human, because if you're still naming streets after the present regime, when the next one comes, they're going to change.

Naming conventions, like "Joburg" and especially here in New York right now, are usually rooted in gentrification. Once certain neighborhoods are targeted and given a nickname, that's when you know the people who live there are about to be pushed out.

Same thing that's happening, because Johannesburg is going through that. The central part of the city, the older part of the city, is being gentrified. And the common phrase they use is, "We are bringing people back to the city."

The question for them is, if you are bringing people back to the city, does that mean that the city was devoid of people before? But there were people. Those people happened to be black, struggling—not even middle class, they're poor people.

Get an area that has survived, and those with money come in and recolonize it again. The idea of colonizing is a concept similar to racism. Racism will never end—instead it will just evolve and take a new shape. Whether you were to go and live in an affluent suburb or neighborhood, still people look at you. They say they don't see you as a black person, but they still do. The man will say it to you, they will say it to themselves, but it is how it is said that matters most. There's nothing wrong with saying one is black and one is white. It's how you say it and the context.