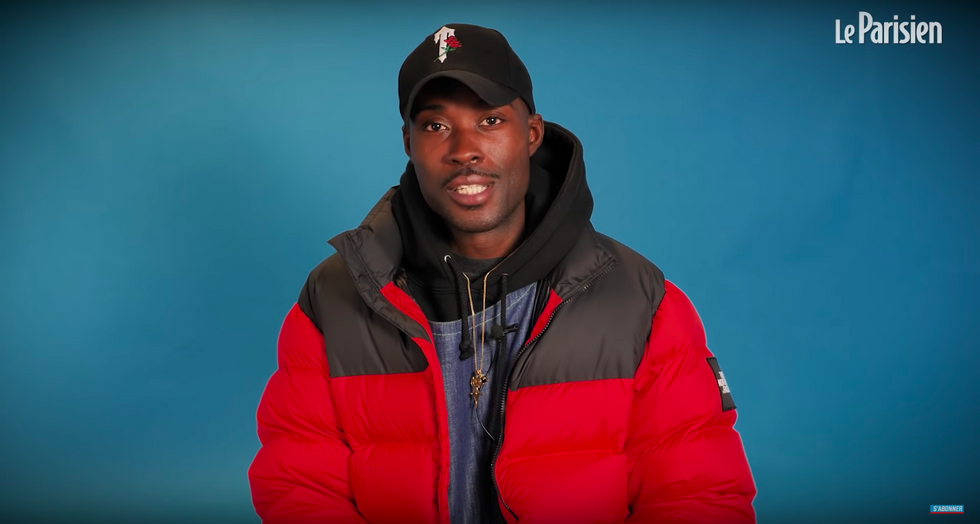 The French rapper is currently on trial for his music video "Hang White People," which depicts what life might be like if the racial tables were turned.

When the music video "Pendez les Blancs" ("Hang White people") by French rapper Nick Conradwas released, the backlash was intense. The video shows what life would be if black people had enslaved white people. "Hang white people… arm them and let them kill each other" Conrad raps. He is not the first artist to think about a life where Black people would dominate white people. Todric Hall's music video "Forbidden" and Malorie Blackman's novels "Noughts and Crosses" did it before. But in France, a country that still tries to stop Black people from organising as a community, Nick Conrad had to pay the price.

First, he received countless death threats and lost his job at a prestigious French hotel. Everyone, from French personalities to the government called him out. And then, two anti-racist and anti-semitism organizations, the LICRA and L'AGRIF sued him. His trial happened last week. French journalist Sihame Assbague was there to witness it, and what she reports is baffling.

To the prosecution, Conrad is encouraging his audience to kill white people. They believe that anti white racism or "reverse racism" is just as bad as any type of racism and that Conrad is using a "black supremacist language" with words like "queen" "king" when he mentions Africa. In their mind, once Black people stop trying to integrate and start organising themselves, it's just as bad as white people being racist. Ethnocentrism is dangerous.

And by saying that, they echoed a strong belief in France that "we're all French unless we're not white and if we're not, we have to stay quiet about it."

One strange thing from the trial was that the prosecution was blaming Conrad for making a violent piece of art, doubting whether or not he was an artist with "integrity" or "talent," citing white rappers and writers who were more "artistic"...thus lying and forgetting the millions of art pieces created by white people who are incredibly violent, from film to video games to music.

"The fear created by Nick Conrad's video is laughable. He is being accused of incitement to racial hatred, but there is no way anyone is going to reenact it in any way, shape of form in real life."

On top of that, they also criticized Conrad for mentioning Malcolm X, who, for them, was a "black supremacist" rather than Martin Luther King Jr., who was "more peaceful." French culture has a strange way of revisiting American history, especially when it comes to both Malcolm X and Martin Luther King Jr., making the revisionist assumption that there is, on one side, a "good" black man (MLK) who wanted his people to integrate and live peacefully with white people and on the other a "bad" one (Malcolm X) who wanted to segregate. It, obviously, disregards both men's work and King's discourse, especially his Letter from a Birmingham Jail. Like Conrad's lawyers said: "People should actually read both men's works before mentioning them."

The fear created by Nick Conrad's video is laughable. He is being accused of incitement to racial hatred, but there is no way anyone is going to reenact it in any way, shape of form in real life. And that was exactly Conrad's defense: he was being judged for facts that don't exist. "How can black people be black supremacists when, frankly, we're at the bottom of the ladder?" he wisely asked. Early on, as a black man faced with racism, the rapper, realized that he would never be a normal citizen in France and the country would never acknowledge him. That's what led him to portray that violence.

The whole point of his song is to show what real racism was and still is for black people.

"An audience's heightened sensibility when faced with a critique of racism shouldn't limit an artist's freedom to create work that calls it out. The song is a violent, disturbing piece of art. But history itself is violent, shocking and disturbing. As long as a perfect equality between races is not achieved, Conrad's message can't be condemned." Conrad's lawyers explained at the end of the trial.

"The Nick Conrad trial is proof that freedom of speech stops where white fragility begins."

The irony is not lost that organizations that are supposed to fight racism are so hell bent on bringing down a working class Black man who made a rap song about just the idea of racial retribution. Anti-racist organisations are especially confused in France, to the point where they are not even aware that some types of racism, like reverse racism, don't exist.

The Nick Conrad trial is proof that freedom of speech stops where white fragility begins. ironically, white people are the most protected racial group. Millions of violent songs are released every year, whose lyrics are equally as violent against certain groups of people, but when one is attacking white people, an artist is on trial.

Other rappers have been sued but thankfully, were acquitted. Another point is that the prosecution was adamant that Black unity is a threat to white people because Black people will try to one up them and get their revenge. It is a reminder of what psychologist Guilaine Kinouani says about white guilt: "French people are absolutely terrified of 'pay back' from Black people. The fear of revenge underscore every state dynamic when it comes to Blackness. It's both terrifying and fascinating, like the shadow of the French empire."

Hopefully, Nick Conrad won't have to suffer even more the consequences of such guilt.

A few crowdfunding campaigns have been created to support him but they have all been taken down a few hours later due to the backlash Nick Conrad is receiving. You can support him by following him on social media.