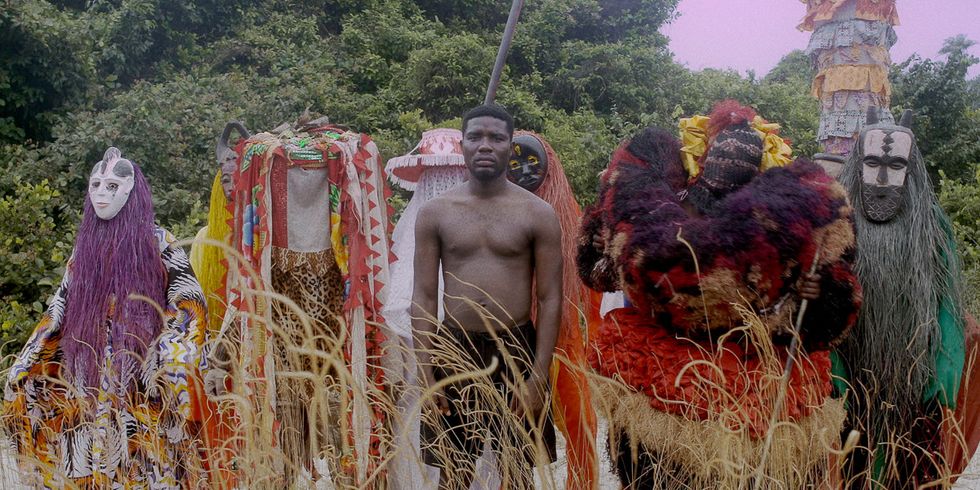 We spoke to Abba Makama to get the story behind The Lost Okoroshi, his phenomenal new film about ancestral spirits that premiered at the Toronto International Film Festival.

The Lost Okoroshi, by Nigerian filmmaker Abba Makama, takes audiences on a trippy ride into the clash between traditional and contemporary cultures in modern day Lagos. The movie made its world premiere at the Toronto International Film Festival (TIFF) in September 2019.

Raymond, played by Seun Ajayi, leads a conventional and not particularly ambitious life with his wife in a suburb of Lagos. By day, he's a security guard who dreams of escaping his daily commute into town by moving to the country. But every night, he is plagued by dreams where he is chased by the Okoroshi, ancestral spirits in the Igbo tradition who appear in costume in a masquerade. He consults the chief in his traditional village, who tells him to stop running from them. One morning, he awakes to find that he has been transformed into one of the spirits in full masquerade costume. What then, comes next?

The mood veers from dreamy to tragi-comedy as the unfortunate Raymond tries to re-insert himself into the life of a married, nondescript security guard with little success. As he journeys through the city, it's in the reactions of those around him, from the gritty, funny sex workers who accept him without question, to the IGBO People's Secret Society of Heritage Restoration and Reclamation (IPSSHRR) and their battle to lay claim to the traditions he represents, that flesh out the conflicts of contemporary Nigerian society. Much of the humor comes from Makama's finely developed sense of the ridiculous, along with a sly satire, with the realistic elements to add the darker edge.

The sky is acid-tinged with color, and the contours are realistic, from the rubble of the streets leading to Lagos to the flashy nightclubs and the slums where the new Okoroshi dances for money. A cool soundtrack veers from electronic mood music to contemporary Afrobeat, adding depth to the surreal feel of the film.

The Lost Okoroshi is Makama's second feature after the acclaimed Green White Green, which premiered at TIFF in 2016. Born in Jos, Nigeria, he first studied business management in Nigeria. "In 2004, I transferred because of university strikes that would go on for ages," he tells OkayAfrica. He continued his studies in business at the State University of New York, although he had already begun to pursue film. "I was always an artist," he says.

He studied film by voraciously watching his roommate's DVDs in their apartment. "I figured out the difference between good films and bad films." He began by making shorts, and says he often surprised his film friends when he told them his major was business. "I knew how to edit. I know all the nuances of film making. I could do it as well as Nollywood."

Even his father was impressed with the passion and dedication he had for film. "I told him of my dreams. I told him I wanted to put Nigeria on the map." After graduation, went on to study film at New York University through a three-month intensive. He landed a brief internship in New York City, and then took his knowledge back home. "I went back to Lagos and started hustling."

Some acting and production gigs followed, along with shorts Direc-toh in 2011, and Party of Ministers in 2012. Makama calls a 2014 documentary for Al-Jazeera, Nollywood, his big break. His 2016 debut feature, released as Green White Green (And All the Beautiful Colours in My Mosaic of Madness,) is available on Netflix. Making the jump to features is a big move, but he was encouraged when the Tribeca Film Festival contacted him before the film was even finished, based only on a trailer they'd seen. While the timing wasn't right for Tribeca, it gave him the courage to submit to TIFF.

The idea for The Lost Okoroshi came from childhood memories. He would travel with his family to their ancestral village, where they held the masquerade of the Okoroshi. Women and children were not allowed to view it directly, so he remembers it as an exciting event he peered at from a crack in the door. "When I got older, what I realized was yo, he's just a guy in a suit," he laughs. Still, the idea of masquerade—of donning a mask and actually becoming someone or something different—stuck with him.

As he got older, too, Makama studied the work of Carl Jung, and the notion of universal archetypes added even more resonance to the idea of the Okoroshi and the masquerade. "It all comes from the same place."

The characters in the movie ring true, and much of it comes from direct observation. The cheerful sex worker who likes to work afternoons so she can watch TV at night was based on someone Makama met. "I spoke to her at length." Some of her actual lines are included in the script. IPSSHRR, the tribal chief, and their lengthy meetings discussing traditional culture and values around a big table came from co-writer Africa Ukoh and a trip to one such meeting with his father, a tribal chief.

In addition to directing, Makama serves as editor, producer, and co-writer of the screenplay. The film also stars Judith Audu, Tope Tedela, Ifu Ennada, and Chiwetalu Agu, with dialog in Igbo, Pidgin English, and English, with subtitles. After its run in Toronto, the movie will make its European premiere at the BFI London Film Festival in October 2019, then on to another festival in Stockholm, with the Lights, Camera, Africa film festival in Lagos at the end of September, along with other screenings planned.

With its blend of magic realism, comedy and tragedy, and art house values, Makama sees The Lost Okoroshi as part of a new wave of Nigerian film that aims to go beyond the established—albeit highly successful—tradition of rom coms. "It's the next stage of Nollywood cinema," Makama says. According to him, it's just the start. "There is an array of artistic films coming out," he says. "This is something we've been fantasizing about."