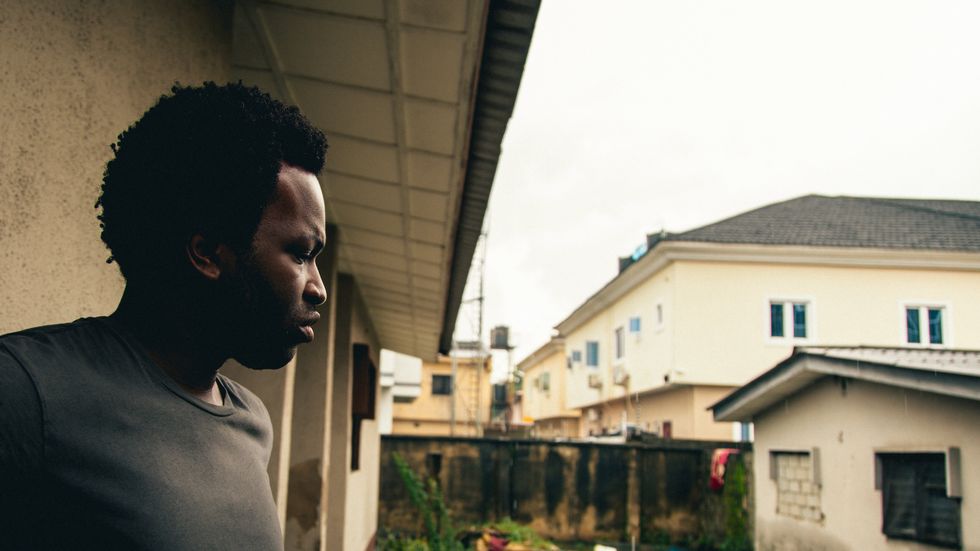 We speak with Faraday Okoro, the director of "Nigerian Prince," premiering this month at Tribeca, about bringing this not-so-familiar Nigerian scammer story to life.

We've all heard the story before: some unknowing (white) person gets an email from a Prince from the outskirts of Lagos, claiming he'll transfer a substantial amount of money to their account if they help them do such and such. The person naively falls for the outrageous scheme and becomes yet another hapless victim of the cunning Nigerian scammer.

It's a familiar narrative, one that's cleverly explored in the upcoming film Nigerian Prince—the debut feature film by Nigerian-American director Faraday Okoro—but not quite in the tired way we've heard it in the past.

The film, loosely based on Okoro's life, tells the story of Eze, a first-generation Nigerian-American teenager sent to Nigeria against his will to attend school and learn more about his heritage—every Nigerian child living abroad has been in that predicament before. Once there, he discovers that his cousin Pius is a 419 email scammer. After learning of his cousin's illicit activity, the protagonist realizes that he can buy a ticket back to the States by successfully pulling off a couple scams of his own.

Nigerian Prince was the very first film to win the AT&T Untold Stories prize, earning Okoro a cool one million dollars to produce the film. Fast-forward a year and the film will debut during this year's festival.

We caught up with the filmmaker ahead of its premiere later this month about how getting sent to Nigeria as an adolescent drew him to filmmaking, the importance of storytelling from a first-generation perspective and the process of bringing this not-so-familiar Nigerian scammer story to life.

When you mention "Nigerian email scammer," that might get some people's eyes rolling. How will this narrative offset people's concerns about playing into certain narratives, and is there a unique spin on the typical scammer story?

Of course, it's more than just trying to portray a certain type of person or a country in a particular light. It's a more nuanced story. It involves a lot of stuff that first-generation, and Nigerians living in Nigeria are accustomed to. Things that we speak about among ourselves. It's a story that's more holistic than just trying to show dirty laundry. Do you know what I mean?

The story is loosely based on your own story. Your Nigerian parents came through on their threats of sending you to Nigeria for school. How do you think that experience shaped your path, or your knack for storytelling? What impact did that have on you?

Yeah for two years. I would say it's the reason why I'm pursuing film as a career. Obviously it's the reason why I want to tell this story. It's there that I formed my appreciation for filmmaking. The story goes, when I was sent there the first year, as you probably know, there's no 24-hour electricity, especially where I was staying. There was just a handful of channels. When they turned on the electricity, there was this film, Road to Perdition playing on screen. I was just glued to it for 30 minutes. Then the power cut off. It was at that moment—I was like "oh man, I need to finish this movie, and I need to watch more movies like this." The love for filmmaking started there.

Are there any other films in particular that inspired you in a similar way?

Not as much. There's obviously a bunch of films that I love personally, like Remains of the Day or Schindler's List or Michael Clayton or 2001: A Space Odyssey, but it's that film, I would say had the most impact. I didn't watch any films that were mature films before then. They were all, I would say, childish movies. That was the first serious movie I watched. I realized okay, wow, filmmaking is more than just childish antics or slapstick or whatever the case might be. It's actually a way to inspire others. It's a way to show other people's experiences. It's a way to share narratives.

How did your parents react when they heard that you wanted pursue film? I doubt they sent you to Nigeria thinking that that's what you would pick up.

[Laughs] Yeah, initially I wouldn't say they were fond of it at all. It was a real battle in my house like "How about you do that later? How about you pursue something a little bit more acceptable." But I stuck to my guns. I knew that I didn't want to do anything else but this. There was no point spending all those years in school and all that time looking for a job, and spending time in an office. I'd rather try to pursue filmmaking.

Did their perception change at all once you won the million dollar prize at Tribeca last year? How was that experience?

It was fantastic, as you would expect. A dream come true. We wanted to make the movie by any means. Getting the funding just made it easier, if you know what I mean. I didn't have to compromise. If I wanted 100 extras or 50 extras for this particular scene, I knew it was possible, as opposed to if I had less money, I'd have to figure out a way to shoot around it.

It was interesting, to say the least. It's a very fast city, as you know, it's very populated. I said to myself if I can make this film in Nigeria, I can make any film anywhere because it's different over there. Also, when people see cameras out and about, or foreigners out and about, it brings a lot of attention. It makes shooting in New York City look like a piece of cake.

We had fun. There's thousands of productions taking place there. It's like if thousands of other people can do it, we can do it too. We shot, I'd say, 95 percent Nigeria, and 5 percent in the States.

Why is it so important for you that your first feature-film be centered on this uniquely Nigerian narrative?

As a first feature, especially one that's close to me—since I wrote it and was partly inspired by my upbringing—I thought this story's not readily out there, especially for a Western audience. I thought I could do it. I could make the type of film that I knew I would wanna see set there. Especially from a younger perspective. Because I'm young, my take on filmmaking is probably different from an older person's who might film it. I think I'm bringing a young perspective to this type of story and to these characters.

From an outsider's perspective, do you think this movie has the potential to change perceptions about not just Nigerian scammers?

Oh, definitely. I don't think people have seen, again, this world in terms of a Western audience. People haven't seen this world. I think there is, obviously, a hunger for it, considering what the amount of attention Black Panther has gotten. There's a hunger for diverse stories.

Just curious. Is Yoruba, Igbo or any other indigenous language spoken in the film?

Approaching it from a person like myself whose grown up in America, and who's been exposed to Western, Hollywood films, I knew it was possible to tell this story and not compromise it in any way. Not to make it where everybody speaks English and there's no pidgen or whatnot. I knew how to tell the story to appeal to a wide variety of people. Not only Nigerians, but people all around the world.

That comes from you growing up in both environments. Do you think that first-generation background have a real impact on the way you tell stories?

Yeah, especially this story. I used both firsthand experiences to write the young character's story. My co-writer and I, we used our knowledge of film to try to situate a foreign audience into this world, without having to spoon-feed them information, instead, having information being revealed through us very creatively.

Lastly, I want to know how it feels to have support from so many influential people. I heard Spike Lee and Sam Poler are executive producers on this project?

Yes they are. It's beyond gratifying. I've truly been blessed to be able to make this film. It's something that I've spent years trying to get it off the ground. To have their backing is just amazing.