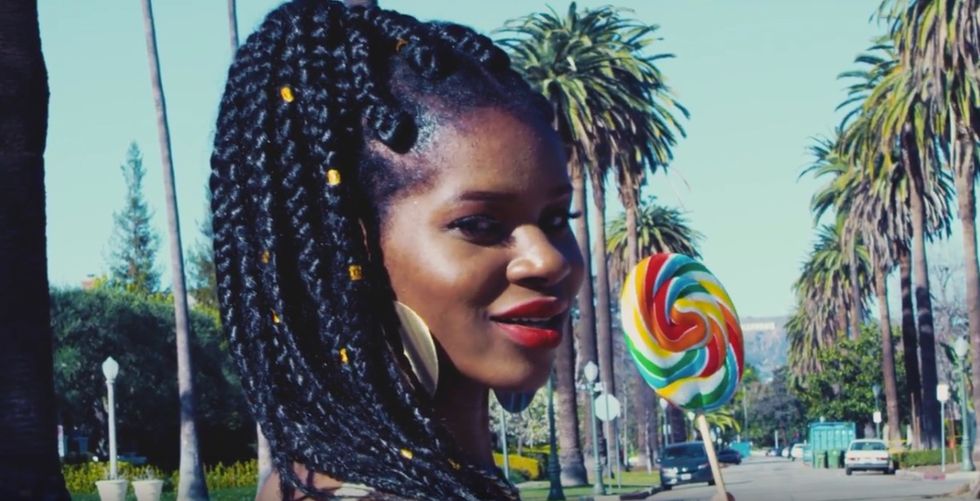 On Monday, an aspiring rapper by the name of Princess Vitarah posted a new music video to YouTube called “Nigerian Pussy.” Within hours, it was trending on Twitter and exploding across Facebook.

On the track, the artist brags that “Naija pussy is the cream of the crop.” She also throws shade at Ghana. The video sees her continue to boast in the streets of West Hollywood with what appears to be her L.A. crew.

Not surprisingly, the song and video have proven divisive. Many commenters see it as crude. Others can’t resist the track’s catchiness. Some are even championing it as sexual liberation unlike anything Nigeria’s seen before. A few just find it hilarious.

We spoke with Princess Vitarah over the phone Tuesday to find out the story behind her viral song and video. But mostly, we wanted to know about the person behind the spotlight.

The rapper/singer tells us she was born in the States but that her family moved back to Nigeria—Lagos and her family’s village, Arochukwu—when she was little. She lived in Houston, Texas for a while before arriving in Los Angeles last summer. “I knew that L.A. is really really competitive and I wanted to try and figure out how I could stand out from all the millions of other artists that are here,” she tells us.

Indeed, less than 48 hours and 75,000 views since her video’s release, it’s clear she’s standing out. And so without further ado, we present the story behind “Nigerian Pussy” as told by Princess Vitarah herself.

Update March 5, 2016: The original "Nigerian Pussy" video was taken down by YouTube. It reached 120,000 before it was flagged as spam. The following video was re-uploaded by Princess Vitarah on March 3.

What gave you the idea for “Nigerian Pussy”

Before coming to California, I knew a lot of people who had moved to places like New York and L.A. for like one or two years, and nothing works out and then they have to move back home—like, move back to their small town or whatever. And I was like, ‘I don’t want to have to go back,’ so I knew that if I was coming to California, I would have to be really really creative. That’s the main reason I wanted to do “Nigerian Pussy.”

And prior to “Nigerian Pussy,” what was your music like?

Before “Nigerian Pussy” I was rapping, and I have two remixes on my YouTube. One is called the “CoCo” remix and the other is called the “No Type” remix. With my lyrics, I just like to be playful and have fun.

I know some people have been asking... Is it serious or is it a joke?

It’s serious. I don’t know why people think it’s a joke. Like, that’s a real song. Everything is real. I don’t take my music as a joke. I take my music really, really seriously.

We have to ask. Has your family seen the video?

[Laughs] My sister called me. My mom and dad, I don’t think they’ve seen it. I hope they don’t. And then my brother, I hope he doesn’t see it either.

My sister, she’s like the coolest one. She’s the most understanding. But my other family’s way more conservative, so I hope they don’t see it. So far I don’t think they have.

Where are your parents right now?

Why the Ghanaian line? Why did you go after Ghanaians?

[Laughs] Because I have a lot of Ghanaian friends, and we’re always making fun of each other. We’re always teasing each other. And Ghana and Nigeria are neighbors, so it just made sense. It would be like America and Canada. You know how sometimes Americans and Canadians will make fun of each other? It’s kind of like that. It’s not personal. Even my Ghanaian friends are just laughing, they’re just like ‘I’m crazy.’ But they don’t take it personally. They know that I have nothing against Ghanaians.

What have been the reactions so far to the video? How are you dealing with the spotlight right now?

They have been insane. It hasn’t even been 24 hours since I posted it. We posted it around 1:00 yesterday. I’m like, ‘this is insane.’ The video already has, like, 12,000 views. Whenever I post my music I get like a couple tweets, a couple likes, and I’m like, ‘okay.’ Since this happened, I don’t even know what to do next, because I’ve never gotten this before.

On social media it’s been a lot of positive, but at the same you get negative. Like, people taking it the wrong way. I guess it’s art, so people will interpret it however they want to.

What’s been like the coolest thing you’ve seen happen so far? The memes! Like, they happen so fast. I just saw one on Instagram, and it was Hank from that TV show [King of the Hill]. Like they did Hank, and they did the meme when your parents catch you listening to “Nigerian pussy.” And it was like this dude listening to it, and then his dad walks in. I think how fast they make the memes has been the most shocking thing for me. And then how fast people find out about it. One of my cousins in Nigeria sent a picture to another one of my cousins here in the states, and then she was commenting and was like, ‘I’m gonna tell your mom’ or something like that. I didn’t tell any family. All I did was post it on Twitter. And Twitter started going off. Who are your favorite rappers in Nigeria? My favorite rapper in Nigeria has to be Olamide.

I know! That’s so crazy. I was screaming, I was literally screaming last night.

I also like Phyno. I know I’m supposed to say him just because he’s my Igbo brother, but I like him too.

They should continue to share it [“Nigerian Pussy”] so that we can put Nigeria on the map, so that way, maybe we can open the door for other Nigerian artists to come over too. There’s a lot of talented artists in Nigeria who are just waiting for someone to blow up in America and then they’ll open the door for everyone else. The same way dancehall and reggae came over. Yeah, that’s my biggest goal.