10 Albums That Prove Nigerian Rap Is Back On the Rise 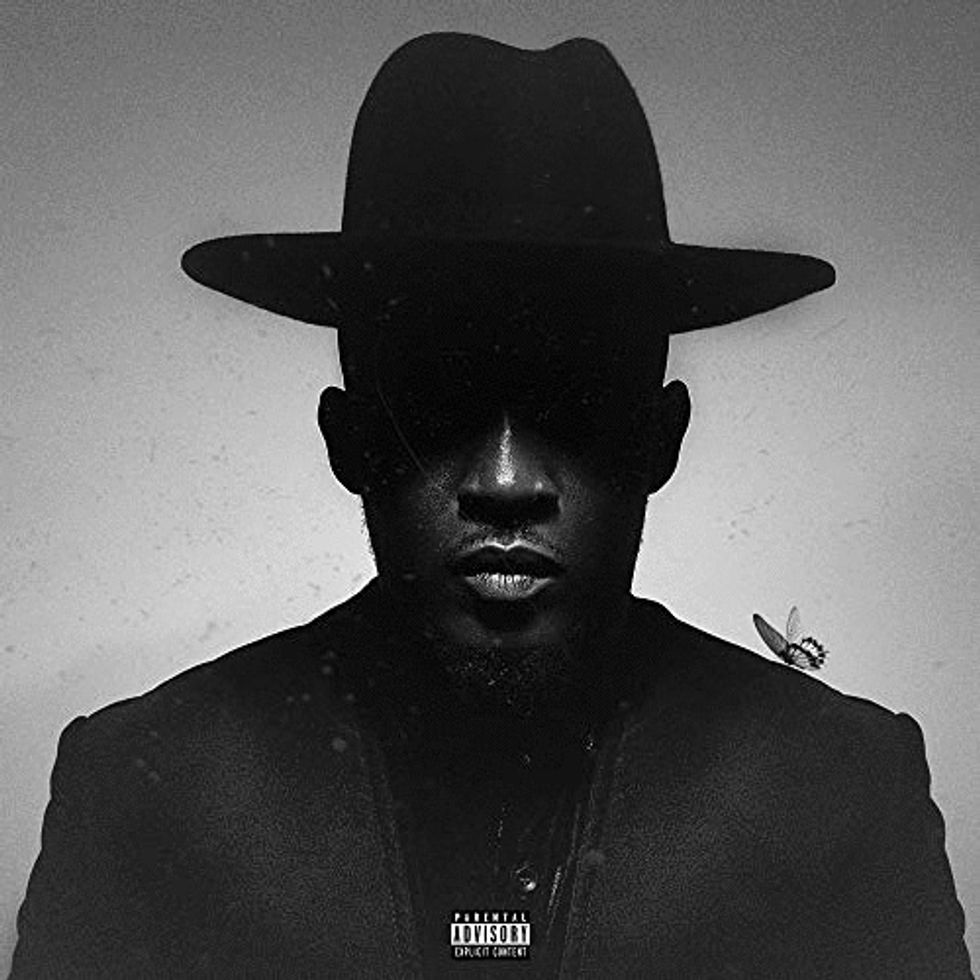 M.I Abaga 'A Study On Self Worth' album cover.

Until 2018, rap in Nigeria was all but dead. Lamba or party afropop blew up and became way more lucrative. There weren't too many rappers who were able to make commercial-yet-indigenous Nigerian rap music since the likes of MI Abaga and Ice Prince. More and more rappers were singing at the same time "Alte Cruise" was growing in Nigeria, trap was big in the US, grime was rediscovering itself in the UK and South Africa was at its most vital yet.

So what happened to Nigerian rappers? The big names were couched in the comfort of their pop status. The younger rappers were yet to find their voice and in these intervening years, lamba music just got bigger and bigger, and rap less lucrative. Whether planned or by coincidence, a slew of confident and well thought-out albums were released with the trend continuing in 2019.

Read on for our selection of the best new albums that prove Nigerian rap is back on the rise.

For his fifth solo release, C.O.L.D, Ice Prince has siphoned from the wellspring of trap-emo in a way that has re-energised one of Nigeria's most successful rappers. It has also focused him on exploring fresher soundscapes, away from the baggy, big status album that was Jos To The World (2016), which came after Fire of Zamani (2013) and his debut Everybody Loves Ice Prince (2011).

On "Hit Me Up," an effective hook from Straffitti puts Prince in a delightfully boastful mood. The insecurities and hedonism of the romantic relationships of a touring artist are at play on "Tour 254." Trap snares add zest to what was once a resolutely bedroom R&B beat. That's the work of Remy Baggins, whose soundscape would seem to bring out delicate shades of emotions from Prince. The dance-funk of Baggins' production on "Space-Funk" ably combines its hallmarks of synth keyboard bass lines, electric bass and thumping percussion with commanding drum claps, all of which provide ample grounds for Prince to rap "straight" and fluently about the delights of a high. Added to the jangle and bounce of the beat, Prince ably supplies chest-beating bars about prowess and stature in ever convincing fashion. The tough talking rapper who would only risk melancholy and regret is fully submissive to his feelings on "Las Gidi No 1 Chic." Without much in the way of personal revelations from Prince, C.O.L.D is a potent self-portrait in the continuing evolution of the artist and his craft.

M.I Abaga 'Rendezvouz' & 'A Study On Self Worth: Yxng Dxnzl'

M.I's clarion call that is "Fix Up Your Life" could be credited with revivifying Nigerian rappers, at least those who heeded. He's led by example releasing two outstanding projects in a single year; Rendezvous: A Playlist is big and sprawling, drawing from the country's pool of younger talents and soundscape ranging from emo to trap while A Study On Self Worth: Yung Dxnzl is a deeper exploration of self value as it relates to nation building and the well being of a people and the individual in sync with contemporary tastes in self care. Both albums are huge mid-career statements that are even more commendable considering his cemented status as one of the continent's foremost rappers.

In 2016, LadiPoe was the first rapper signed to Mavins, then Nigeria's most successful pop label, and concerns were that the move would water down his credibility. In 2018, after a slew of singles and features, the young rapper delivered on his bags of promise with Talk About Poe" a project whose 10 tracks, totalling 30 minutes, signify studied succinct song-making and sympathy with listener's attention spans. LadiPoe is a fluent rapper whose nimble flow could become even nimbler and absorbent of evolving rap styles though better displayed here is his ease with different subject matters. He goes toe to toe trading bars with Ghost on "Double Homicide," ably matches the crystal clarity in Seyi Shay's singing with slick bars about his irresistible on "Red Light," regrets immaturity in a romantic relationship on "Falling," and on "Win Win," one line shows a knack for aligning personal events to the Nigerian zeitgeist—"I learned to drive in Lagos city so you know I'm never sticking to my lanes now."

Individually, both A—Q and Loose Kanyon are stalwarts of hip-hop in Nigeria. Combined, they make a formidable team matching each other's maturity and experience even when not equally yoked on a skill level. The overriding concern on Crown would seem to be restoring vitality to hip-hop and the joy in rapping, whether as performer or listener. The project consists of 10 songs that variously display fierce lyricism and admirable song-making over a range of topics that include rap supremacy ("Crown"), repentance from wrong doings ("Regrets"), a possible new genre in afro-drill ("Gang Gang"), soul-searching that incorporates negro spirituals ("Hustler's Prayer"), and ratchet club bangers ("No Time"). In a genre that slavishly celebrates the new and trendy, Crown sets a precedent for younger rappers on the importance of self belief and self conduct in the middle years of one's career.

If we were paying closer attention, Blaqbonez released a definitive rap project in 2017 with Last Time Under. Then unsigned, the sprawl of 17 songs showed unbridled creativity and zest at a time many were convinced Nigerian rap was in the doldrums. It is no surprise then that the young rapper's response to MI's call to action that is "Fix Up Your Life" stood tall and convinced the CEO of Chocolate City Group to sign him up. Bad Boy Blaq is a surefooted and enjoyable debut project that unsurprisingly shows calculated song making and choice of features as well as welcomed brevity. The record also sees Blaqbonez as a hard-nosed trapper ("Accommodate" and "Denied"), a slick seductor ("Mamiwota," "Consent"), unrepentant hustler ("5am"), and an emo-G grappling with emotional vulnerability ("Tosin's Song")—all of which contribute to an accomplished debut which promises more.

On their "Palmwine Music" series the duo of Ghost and Tec learnt to loosen up and fully explore a lusher soundscape than listeners were accustomed to from them. Released in October, the second edition of Palmwine Music, like its predecessor, cherry picks from bouncy, feel-good highlife production. In a separate series titled Clone Wars, the fourth of which, These Buhari Times, dropped on January 1st, and as is typical of the series, shows the group excelling in hard knuckle, dexterous rap and what was once termed conscious but is today called woke.

Falz' new album Moral Instruction is his boldest and most fortnight yet in its sustained scrutiny of Nigeria's corrupt moral fabric. Not one of the eight songs on the project is an exclusive attack on any one theme except for "Amen," which is largely about the moral failures of prosperity gospel in line with Daddy Freeze, the Lagos based on air personality who crusades against rich pastors with poor congregations. The same is true for "Johnny" which is about the killing of innocent citizens by trigger happy policemen which authorities routinely blamed on "accidental weapon discharge."

Falz is just as unrelenting on "Hypocrite" which addresses homophobia, pedophilia and a corrupt electorate who sell votes for favours. The mindless chase for social relevance on social media is castigated on "Follow Follow" which samples the urgency from Fela's "Zombie" and is given even more oomph by woozy synths and trap drums. "Four year tenure, three years holiday" raps Falz on "Talk," taking potted shots at President Buhari and his campaign for re-election and its bandied slogan for a different approach to government, later adding that, "we buy your story but you no give us change." Beyond just borrowing from Fela's oeuvre and moral high handedness, Falz directly invokes the great one's spirit on "E No Finish" by deploying a neat and clever multisyllabic rhyme scheme, "somebody tell Baba Fela e too talk truth / say the government still dey shit on youth / animals them still dey put on suit / and agbada, our leader them, still confused." Say no more.

In November 2018, CDQ followed up his 2016 debut effort Quality with Ibile Mugabe, an impressively consistent sophomore album. He's a trapper whose rich voice, reminiscent of Jeezy, is commanding on "Asante Sana" —helped by a choral and orchestral swell and on viscous trap of "Aye," both of which feature strong guest appearances by Stunner and L on the former and Phyno and Reminisce on the latter. He combines perfectly well with top layer afropop artists as he does on "Entertainer" over production that signals EDM even when redolent with highlight guitars. The honey in Tiwa Savage's fine vocals on "Gbemisoke" delightfully contrasts the rougher textures in CDQ's voice. The raspiness but smoothness in Kizz Daniel's singing on "Gbayi" is a closer twin to the raspy and rough in CDQ's verses that seem to ride over the slightly hideous galala beat which Daniel brilliantly teases out. This is only eclipsed by Mr Eazi on "Soft" on account of the mellow, sun-dappled arrangement by Masterkraft. CDQ's has long formed a rewarding musical partnership with Masterkraft over a variety of styles from trap on "Aye" to the soul-sampled "Bang Bang" to the exceptional "Werey Yo" whose heaving drums the rapper rides with arresting flow and real stank. Whether over house, pop or trap beats, what is reassuringly clear is that CDQ is an essential and premier street rapper.

Straffitti represents the newer school of Nigerian artists to come after the swell of "Alte Cruise"—and Molotov is a sure path forward. On "100 Benz," he combines well over booming bass synths and trap drums deploying their shared sensibilities for rap-signing to bars about toughness and material possessions. Straffitti's lazy flow is charmingly effective over the unhurried production on "Hunting SZN" that will please boom-bap heads, while his vocal style nods to hip-hop revivalist like Anderson Paak and Kendrick Lamar. Trap the world over has borrowed from R&B melodies more than it would admit and this is clear on stand out song "Kar Keys" which features close collaborator Remy Baggins. both artists seamlessly blending singing with rapping. On "OD," he presents a tale of longing is set to the melancholy of a roving piano which twins with rattling trap snares beneath heavy bass synths, with some similarities to Frank Ocean's tinkering with trap from Blonde onwards. Also remarkable is how tidy all 14 songs are and the total of 45 minutes listening time ensures the album does not become tiresome.

By far the most distinguished song on Alpha's debut album is "Yahooboy Muzik," a remarkably vivid account of life as an internet fraudster. Beyond just empathising, Alpha recounts the poverty that drives many into the business and the rewards and also trappings. So it becomes frustrating when the entire album (and the artist's page) is no longer available on Spotify and is only available on Apple Music in Nigeria. Two early releases—"Ocean Boy" and "Ludo" are available on Soundcloud as well as 30 second snippets of the all 12 songs that make up Half Price.