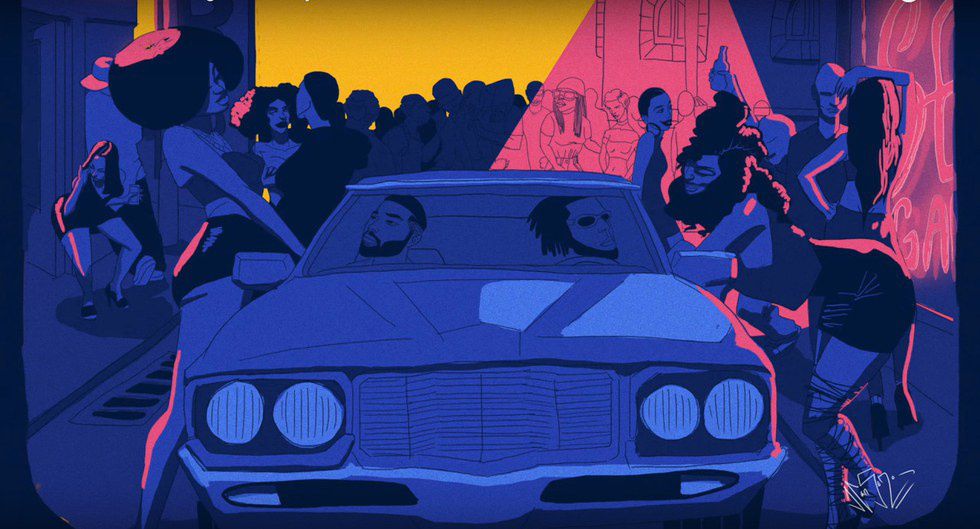 In this new series, we take a look at what we believe are the best Nigerian songs released in the past 31 days.

In the last month, MI's diss track to Nigerian rappers asking them to "fix up their lives" ruffled feathers across country—and on Twitter. Of those rappers who felt compelled to respond, the best was Blaqbonez, who goes further with hard bars that take in pidgin-trap and grime chants.

Reminisce, another rapper MI could well be referring to, has had his own song "Pomile" redone in many versions, not least by Aramide, Jaywon and Chidinma who makes searing a beautifully wistful song.

Sarkodie is fast becoming a compelling video artist. Each of the 16 videos for the 16 songs on his fifth album, The Highest, has been very impressive, 6 of which were released when the album dropped in September and the latest "Faraway" features Korede Bello.

The latest installment of "international afrobeats" (not a thing) is titled "Particula" and brought to you by late-early adopters Major Lazer and three of the better known practitioners in Ice Prince, Nasty C and Jidenna.

And as for Fela, whose birthday fell in October, may he continue to rest in perfect peace.

Read ahead for the Best Nigerian Songs of the Month.

Reekado Banks does well on big busy-body beats. He's done so since his first official release "Chop Am" back in 2015, which shares the heavy rhythm and restless percussion with "I Go Dance." The Masterkraft-produced track is taken from the producer's album, The Unlimited Tape, which dropped in July.

Mr, Mild Manners gets philosophical about money in a way few have done since Mike Okri released "Time Na Money," off his 1988 pop classic Concert Fever.

Adekunle Gold is coming into new kinds of money surely now that he's off contract (but still affiliated) to Olamide's YBNL, and has formed Golden Records under which he plans to release a sophomore album in February of 2017.

MI "You Rappers Should Fix Up Your Life"

This has ruffled feathers and rallied the troops, some of whom are responding with their own versions. A big ego is second nature to a rapper but MI's own exceptionalism - "I am, therefore you ought to be"—is a rare form matched only by the heady heights Jay Z reached on 4:44 . Any digested read, like this one, will only come second to the authority in MI's own words:

Juls' debut album "Leap of Faith" remains one of the most enjoyable afropop albums of 2017. The British-Ghanaian producer is set to follow it up with an EP.

For this first single, Burna Boy, ever the human synthesizer, raps in patois but with a cadence that is particular to Craig David, especially his debut, Born To Do It, whose atmospheric production by Mark Hill is replete with elegant guitar pluckings and soft percussion, an approach Juls has turned into a signature sound that continues to sooth.

It's a certified jam that's not spoilt by the continuing corruption of the phrase "kill them with the no" from the Mr Vegas hit "Heads High" here rendered as "Killamity"—today less of a phrase and more of a vibe which Alade has turned into a sweet refrain.

From the people who brought you the smash hit "Fada Fada" comes this new banger. "Augument" is drawn from the Igbo gospel tradition that ensured Phyno's sophomore album, The Playmaker, was a sure banker.

That album deserves more praise and a longer "shelf life" but Phyno appears set to drop a new record judging by the run of recent releases that include "Augument" which, though repetitive, plays like an undeniable hit.

Nigeria's most loved, 2Baba, talking about the unconditional love he has for his most loved person is sure to be loved.

Shaydee is making up for times lost after a fallow period not helped by a separation from his former label Empire Mates Entertainment. His single "Make Sense" was one of our best songs of September and, not long after, he's dropped yet another jam with "Hold Me Tight."

"Another one?" is what some might ask of Runtown and Del B, who made the absolute gem that is "Mad Over You," which is now followed by "Why?", a lovely song in its own right but one that will have to contend with second rate status as good as it is.

​Harrysong "Under The Duvet"

Few artists combine winning charisma and solid songwriting the way Harrysong does while drawing from a type of Nigerian folk music that's not easily distinguishable from the big blend that is afropop today.

"Under The Duvet" is one such example and a joy to listen to, taken from the forthcoming album by Song, soon to shine an overdue spotlight on the artist.

Skales has simply gotten better as a singer and performer, as is evident on this live set on Ebony Life TV. He still, however, falls short of any forward musical ideas. "Agolo," in composition and video set, is very much like Olamide's "Wo" but also stands as a great take on Young John's wobe beat which the competent Chopstix has repurposed into house music with heavier rhythms and even more jittery electronics.

Falz is in topform. "La Fete" is taken from his album 27—a surprise drop and a satisfying one too. Falz rides Demsa's big body beat with ease and charm deploying his distinct humor and what sounds like pretty decent French.