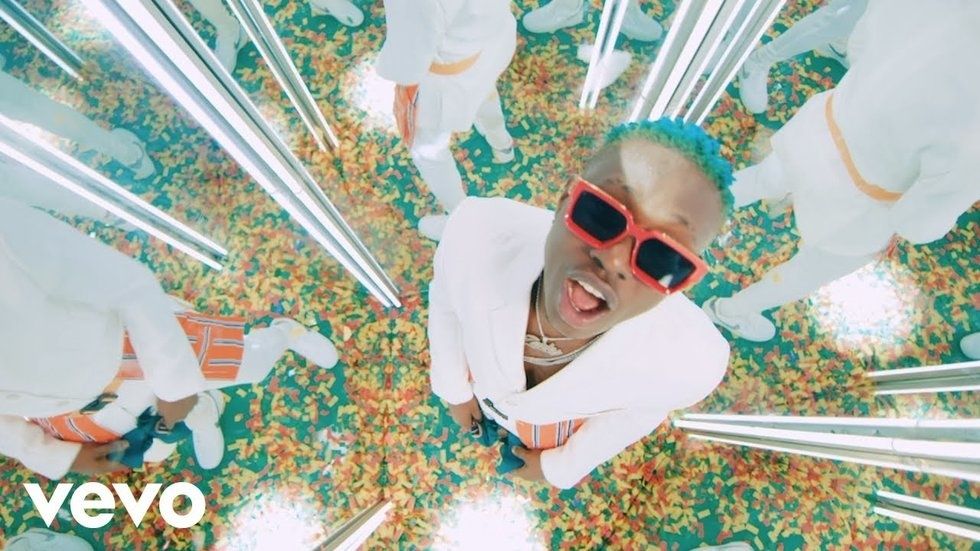 Here are our selections for the best to come out of Nigeria in July.

Wizkid's side hustle as a hook-man on rap songs will make for an instructive playlist and another means of evaluating his genius song-making abilities. Check out "Totori," alongside Olamide and ID Cabasa, for proof of that, as well as "Fibadi" with Chidokeyz.

Zlatan's prodigious output ranges from the lackluster to the brilliant. "Shotan" features Tiwa Savage's proven songwriting and her star power is a deserved boost for Zlatan's assured but monotonous delivery that is often too reliant on impact.

Niniola's excitement on hearing Kel P's riotous house beat as seen in this video is, on its own, a delight. The titular "Boda Sodiq"—a particularly Yoruba corruption of "Brother Saadiq"—has sprang a surprise in bed that is so good it needs caution; "o nke, take it / but just don't break it."

Perhaps done with pop album cycles, Beyoncé latest cultural statement will endure for years. Wizkid is at his most selfless and thoughtful, a side reserved for his studio albums. "Brown Skill Girl" could become a standard as has happened to "Brown Skin Lady" by Talib Kweli and Mos Def. Bankuli's presence is gold on "The Other Side" and elsewhere on the album as a co-curator .

Five of the 19 songs on African Giant are already successful singlea—and the rest have strong potential. M.anifest turns up for a discourse on British colonialism on "Another Story," Future proves to be a vocal twin on "Show & Tell," Serani's catchy hook on "Secrets" could easily be match by Jeremih who restricts himself to a fine verse, "Destiny" is lofty but avoids being twee,"Gum Body" combines Jorja Smith's smooth British R&B with Burna Boy's own mix of afropop and dancehall. Burna's a willing to please a lover on "Pull Up" and "Omo." The big track list aside, this is his most satisfying project yet.

Mr Eazi's "Supernova" shares the same languid guitar, playful love overtures and soft percussive arrangements as 2018's "Pour Me Water" and 2017's "Leg Over " all of which were produced by E Kelly.

The "lyric" video for Lady Donli's "Suffer Suffer" may poke fun at alarmist Nollywood voice-overs and cheap music videos, but on the track itself, throbbing drums are what introduce her forward quest for a good life, "studio rat, account on flat / I pray to the lord that she guides my path."

Kida Kudz continues to impress with how much musicality he teases out of his signature lisp, as heard in "Moon Walk," although the MJ baiting is a bit of a tired musical trope.

Iyanya's search for new relevance gets a helping hand from Peruzzi on "Ijeoma" whose fine pop writing—"you no be custom but na your body dey border me"—is offset by a problematic hook—"I be pastor, e no mean say i no see wetin you carry"—especially after the recent rape allegations against Pastor Fatoyibo, leading pastor of the Coza Nigerian mega-church.

"I'm too fly for this" sings Asa, taking the higher ground rather than lament over unrequited love on "Good Thing" on which treated vocals and electic guitar is joined by a thumping bass drum and Asa's affirmative rhetorical; "who will wait for you? / this plane is leaving without you".

Signed to Don Jazzy's Mavin Records, Crayon shows refined afropop sensibilities on his debut EP, Cray Cray. He is self affirming on "Confidence," a refreshing take on the "soco beat" and does well not to oversell the neediness on "So Fine" even when urged by a steady bass drum and a ceaseless melancholic guitar.

"Same You" by Terri isa surprise pleasure. Combined with twinkling piano, his raspy singing voice and songwriting has more charm than perhaps expected from the 26-year-old newcomer.