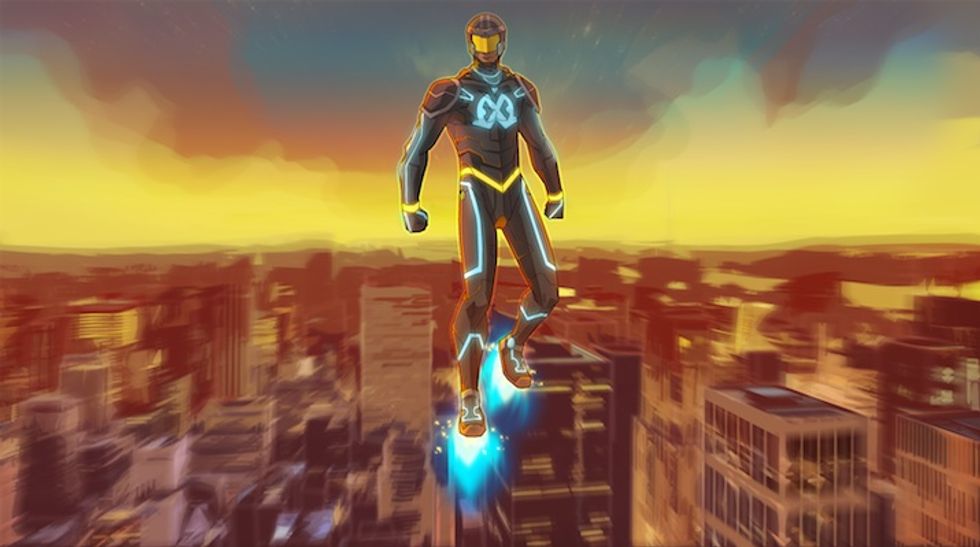 All images courtesy of Roye Okupe

Update February 1, 2016: Roye Okupe has launched a campaign to complete Part 2 of E.X.O.: The Legend of Wale Williams.

So begins graphic novel trilogyE.X.O: The Legend of Wale Williams, which had its official release this week. In it, Wale Williams, a young Nigerian man, returns home to investigate the mysterious disappearance of his father, a brilliant inventor. Upon his arrival, he inherits a Nanosuit, giving him the superpowers needed to fight the corrupt leaders, robotic drones, and radical extremists that plague his futuristic home-- the Lagos-inspired Lagoon City.

Conceived of by Lagos-born digital animator and YouNeek Studios founder Roye Okupe, the comic world of Wale Williams is a welcome addition to the emerging canon of afrofuturistic stories featuring African characters. When we caught up with longtime superhero lover Okupe prior to the launch of his Kickstarter campaign, he recounted what drove him to invest his time and money in the story after being told repeatedly that his great idea wouldn't have a fan base.

"From the first day I laid my eyes on the Teenage Mutant Ninja Turtles cartoons in the ’80s, I’ve been hooked on superheroes. Since then I’ve watched, played and read every single superhero-related title I could lay my hands on: movies, comics, manga, anime, graphic novels, animated movies/series, video games etc. Then in 2008, after noticing there wasn’t a lot of diversity within the genre, I decided to tell a story about a hero from Nigeria."

The success of the novel's Kickstarter speaks to the gravity of his vision. "We hit our target in about two days and for the rest of the Kickstarter campaign we got $10,000," Okupe told CNN. "It was then that I knew this was the right path. Any failure I felt before -- not getting the animation, getting rejected by so many distributors and producers, people telling me my idea is not going to work -- it finally justified the fact I never quit on myself." The product is finally here, beautifully made, and available for purchase. In the future, YouNeek Studios plans to create a more Africa-inclusive collection of superhero comics, including an animated EXO feature film.

E.X.O.: The Legend of Wale Williams Part 1 is available via Amazon, Kindle, Apple iBooks, or directly from YouNeek Studios. The first chapter can also be found for free here.