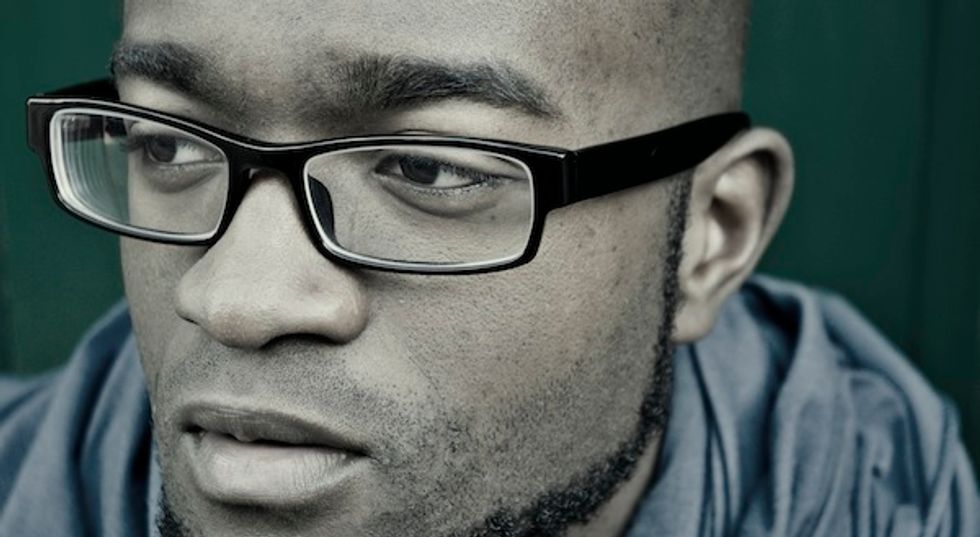 You know that episode of Awkward Black Girl when instead of taking Issa Rae's character to see Donald Glover, White Jay opts for a spoken word gig? Recall the finger-snapping, the 'right on' politics , and that one performer who uses the stage like it's a therapist's couch? Inua Ellams' spoken word style is none of that, and 14th Tale, his broadly autobiographical one-man play delivered with tongue-twisting aplomb, is a perfectly-paced unfurling of a boy's world as he trips his way through a childhood split between Lagos, Dublin and London.  Inua's innovative approach to performance poetry was awarded a Fringe First award in 2009, made him the first African to present a solo show on the stage of London's National Theatre in 2010, and has more recently taken him to India and Australia. Now he's in Nigeria, performing the play as part of the British Council's first Lagos Theatre Festival. We caught up with him just before he left to talk the politics of 'homecoming', Chimamanda Adichie's impact on Nigeria's literary scene, his fears about performing the play to Lagosians and the art of autobiography.

OKA: You're heading to Nigeria for the first time since you left as a kid with your family. Can you tell us about the conditions of your leaving?

Inua Ellams: It's not something I'm entirely comfortable speaking about. I'm still working through the narratives. As a writer I explore exercises in story construction in an attempt to define myself, before feeling comfortable enough to attempt to define others. I'm still working through it and the unanswered questions are the poems, stories and plays that I write. It was a complex interweaving of different issues, religious, financial, career choice, the search for a better life, both political and personal births, deaths and marriages.

OKA: Do you expect touchdown in Lagos to feel like a homecoming, or is your relationship with Nigeria more complicated?

IE: I'm too much of a realist to imagine that when I set foot on Nigerian soil, something unspeakably profound and old will suddenly awaken within my subconscious and I will burst into tears. I am plugged into Nigerian communities here in London and thanks to Aljazeera, Twitter, Facebook and online media, I get a rough sense of what is happening - enough to know that life goes on, and the same speedy transience that envelopes London also exists to envelope Lagos... The city wipes its slate clean every day for new stories and narratives to begin. It has for the 16 years I have been absent. I do not think I remember enough fine detail for it to to feel like a homecoming, I think it will feel like a strange city.

However, last year, I stepped off a plane in Mumbai and felt like I was in Nigeria. It may have simply been the warm weather mixed with Mumbai's energy and the sense that anything could and would happen... Yesterday, I spoke with a Ugandan and when I asked how often he visited 'home' - though he lived and worked in London, he replied twice a year and telling him that I would be in Nigeria for only 6 days, he shook his head in disbelief saying that I should stay longer, that I have to spend time at 'home'. He spoke from a place beyond language - he could not articulate what that meant when I asked - but I could tell by how his eyes softened and the slight sag of his shoulders and the deepening of his smile that just the thought of the place DID something to his spirit. If I came away with something resembling this affectation, it would be... Dope.

What does it mean to be going back to Nigeria right now? Is this an opportunity you've been looking for or just one that came your way?

IE: The live literature / performing of poetry / spoken word / theatre world that I work in in London is in no way paralleled in Lagos, I would not be able to make a living if I lived there. I have wanted to visit and work there for a long while, but I knew it wasn't feasible so did not entertain the idea. When the British Council made contact, wondering if I would perform at the first ever Theatre Festival in Lagos, I knew the time had come. I'm excited to test out my stories among my people and on their own land. In the west, my USP is I am a Nigerian/Irish (that's another story)/British writer who listened to too much 90s Hip Hop and read too much Keats. I have travelled around sharing work enough to know the circles in which I play. But I have always felt Nigeria held the toughest audience. Imagine an apprentice magician attempting to impress his master and that is something of what it feels like. Can I make my mother smile by remixing the stories she told me?

OKA: You're in Lagos as part of the British Council's 2013 Lagos Theatre Festival. How did you get involved in the project?

IE: The 14th Tale was part of the British Council showcase at the Edinburgh Fringe Festival a few years back. It also won a Fringe First Award. Of the 60,000 plus performers and shows at the festival, only about 18 shows are awarded such. The show is relatively light to tour. Me, costumes and a torchlight. That's it. From a financial point of view, it is a cheap, award winning, "groundbreaking" piece of contemporary British theatre. The British Council use a poem of mine as a tool for teaching English, and when I travel with them as a poet, I also run workshops and exercises in creative writing. I guess it made sense. There is a small, but growing spoken word scene in Nigeria, theatre is attempting a resurgence but lacks the corporate or governmental financial backing. There has been a recent explosion in African literature, and because of Chimamanda Ngozi Adichie, Nigerian literature specifically, and to a certain extent I tick all those boxes and can speak about my experiences and how to adapt oneself to an ever changing, unpredictable world of arts and culture. When the Lagos Theatre Festival idea was floated, the planets were already aligned in my favour.

OKA: How do you keep up to date with Nigerian politics, literary scene, theatre, arts etc.? Are there any talents that you're particularly interested to meet/collaborate with?

IE: Mostly through news items posted on Facebook, conversations with friends here in London and the occasional text message from new friends in Nigeria. Of the literary scene, Samuel Sabo, Chibundun Onuzo and Ore Disu are the bottomless wells of information I drink from. Sporadically, we indulge in critical thinking and fancy talk about what is out, why it should or shouldn't be read. I've been recently introduced to Lydia Idakula of the 500-strong Taruwa Collective of artists and I'm looking forward to meeting some of them on my first day.

OKA: How do you anticipate 14th Tale will speak to Lagosians?

IE: I have no idea, and to be frankly honest, I am terrified. I think the European, Indian and Australian audiences who have seen and loved the play, bought their tickets with a cultural curiosity and with questions about contemporary Nigerian manhood and what that means in a British context. I think they left realising that the supposed differences do not really exist, and this unravelling, this sense of having glimpsed a new way in which we are all the same, is enough to  justify and enjoy the spectacle of a black Nigerian man telling his own creation myth. But here, I am Nigerian, telling Nigerians about what it means to be Nigerian. Thus the serpent bites its tail.  It could go very badly...

OKA: 14th Tale is very much informed by memory, but how much has Nigeria and your childhood experiences there become myth as a result of writing/making art about them?

IE: I haven't really glamorised my childhood experiences. I have simply chosen a specific set of stories that portray one side of my youth and further, tell how they affected my current person. I told the truth, mostly. But in the way that telling parts of a truth can suggest something entirely other, I have lied convincingly. I hope I'm making sense. The play is autobiographical and Jeanette Winterson says 'there is no such thing as an autobiography, there's just art and lies'...

OKA: Lately folks like Ozwald Boateng have been keen to emphasize that now is the time for Africans in the diaspora to return to the continent. What are you your feelings on this kind of thinking about home/diaspora and Africa as a site of opportunity?

IE: I think if you have a business model that can thrive within African markets, and you are so inclined, then it is worth a shot. I think the financial speculators a right about the growing middle class populations in Africa and subsequently, the business opportunities there. I think if like my Ugandan friend, your spirit cries out for the land and it is somehow enriched simply by it, then go. But with regards to returning 'home' as some sense of national duty, I'm not so sure. I am an immigrant. Barack Obama and I are similar in that we are descendants of goat herders. My grandmother's people were Hausa nomads - those without homes - so wandering and setting up camp is in my blood. 'Home' is a fluid concept to me, one that changes from person to person, era to era, neighbourhood to neighbourhood, love to love and the world is a culturally and economically richer place for it.  Blaise Pascale said "All of humanity's problems stem from man's inability to sit quietly in a room alone" but some of those who would not sit, would go out to claim land, create borders, draw lines in the sand and stabbing the soil with a flagpole, claim ownership. This was done to our soil and to us, to our very bodies. We have fought and are still fighting to be included in western societies, still climbing the ladders we help built and I do not think we should walk away from it. The world is the way it is now, all our economies are linked, and though without a doubt I champion financial growth on the continent, a back-to-Africa initiative will destabilise economies on both sides of the coin.

OKA: Finally, not to go all Norman Tebbit on you, but how did you feel when Nigeria won the African Cup of Nations last weekend?

IE: Are you kidding?! That night, I made everyone I met honorary Nigerians because of it. I was reading poetry to bunch of folks in Bristol and I spent about five minutes describing exactly how big the African continent is and subsequently, what it meant to be crowned its footballing kings. I was stood outside a club a day later and someone tapped my shoulder asking if I was Nigerian. I was wearing a jumper sloganed "Proud to Be Nigerian" and I ripped open my jacket as if I were a dark Superman and my chest held the "S". I was proud, delirious. The only dark cloud in this endless sky of victory is that the Super Eagles' talons were not crushing Ghana's Black Stars. I'm hoping we face them again, I'm hoping the new age of Nigerian football has begun.