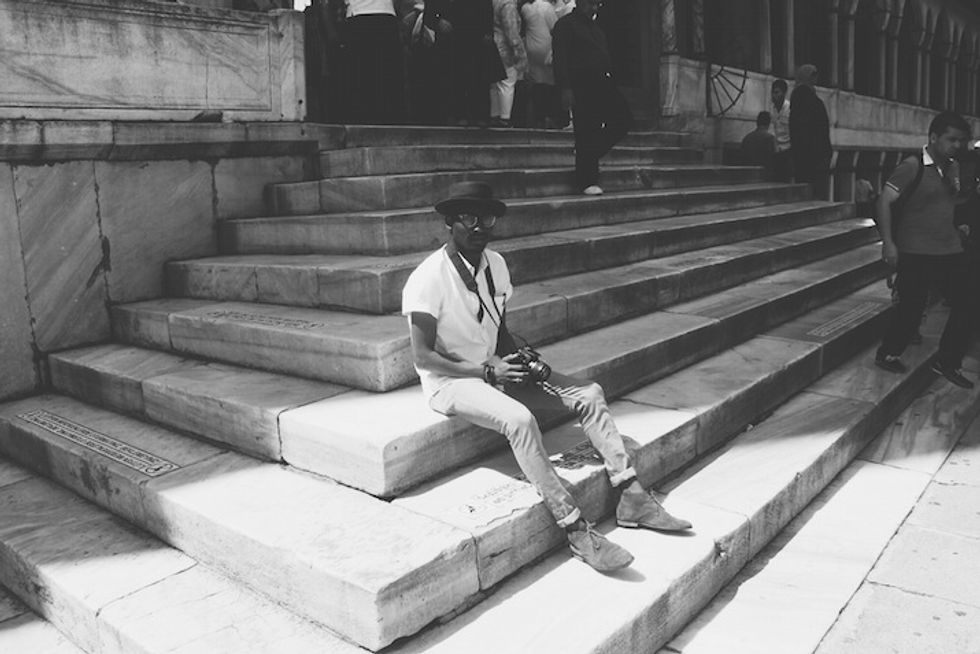 On Wednesday, Nigerians across Twitter began sharing their theories of what would happen if aliens were to encounter their fellow countrymen and women for the first time. Since then, #WhenAliensMeetNigerians has been tweeted 21,000 times and counting, according to Topsy.

The hashtag was started by Wale Lawal, a 22-year-old Nigerian grad student currently studying economic history at the London School of Economics. Lawal, who tells us he grew up right in the middle of Lagos, says he spent "pretty much [his] entire life in the city, trying to understand [his] obsession with the place." In addition to working on his thesis, Lawal tells us he writes part-time for a Nigerian TV drama.

This world is too small for Nigerians. I'm really waiting for the day aliens will make contact with us. They will hear it.

When aliens come to take over the earth, I just hope they'll be prepared to deal with Nigerians. — WALE LAWAL (@WalleLawal) August 19, 2015

"Take me to your leader" "Look, my friend, I said Oga is not on seat!" #WhenAliensMeetNigerians — WALE LAWAL (@WalleLawal) August 19, 2015

Did Lawal set out to spark a Nigerian Twitter-wide discussion? "I suppose I did, though not at first," he explained in an email to Okayafrica. "I’ve always been interested in what Nigerians think about being Nigerian. Nigerianness, Nigerian isms, the various nuances of the Nigerian experience, those are all extremely important to me. And so, more than a discussion, I was aiming for a revelation. I wanted to see more of myself. I wanted to see what Nigerians thought about the possibility of aliens; wanted us to consider the notion that Nigeria is part of the universe in its own right."

For Lawal, this isn't his first time sparking a nationwide Twitter conversation this month. On August 1, Lawal considered what Hogwarts would look like with Nigerian exchange students. Three weeks since its launch, #NigeriansAtHogwarts has been tweeted 80,000 times, according to Topsy. "In both cases, the aim was to allow Nigerians to cast reality onto the imagined and to see and, perhaps, even enjoy the ridiculousness of the Nigerian’s world," Lawal tells us.

"You're from Nigeria? How on Earth did you get here?" I don't know, magic? #NigeriansAtHogwarts

On what inspired his latest sci-fi-themed hashtag, Lawal tells us, "Numerous things: from Deji Olukotun’s novel, Nigerians in Space, to the rapidly growing community of foreign expats in Lagos. These two among many others, had been in my mind for a while. But I blame my thesis, ultimately. I am currently writing – and, thus, reading extensively – about tropical Africa in pre-colonial times. I find myself wondering how it must have felt, being African, to see a European for the first time. I’ve gone through numerous scenarios, all of which are either funny as hell or downright horrific. And so, I suppose I lifted the 'invasion' (if you can call it that) part of our history and superimposed it on a Nigerian future. That afternoon, all of these things were in my mind but rather than speak about them directly or flatly, I thought to use humour as medium. Jokes, mind you, are serious business, and Nigerians on Twitter, the angriest people on Earth, have plenty."

"I’ll be honest; I did not expect it to catch on at all," Lawal says. "I thought it would be too difficult, not relatable enough for people to engage with. I was afraid the hashtag would prove something I hoped wasn’t true: that the concept of 'aliens' is something Western. I wanted to radicalize that idea. Sending that first tweet, I knew it was a tough topic but it turned out to be like reaching into the dark and finding a crowd of people already waiting with cakes. Surprise!"

And what would Lawal tell aliens about Nigerian Twitter? "Nigerians aren’t easy," he says.

#WhenAliensMeetNigerians Alien: is it true that you guys do answer questions with question? Nigerian: who told you? — Amaka (@thatigbogurl__) August 19, 2015

#WhenAliensMeetNigerians Alien: How much for pure Oxygen? Trader:N10k Alien: Isn't it N8k Trader: It's like you are not ready to breathe.

#WhenAliensMeetNigerians Alien: why do you people scream when they restore power? Nigerian: pic.twitter.com/V65lCI2PnC

#WhenAliensMeetNigerians Alien: we come in peace *extends hand* Nigerian dad: Is that how you greet your elders? pic.twitter.com/AVtF6ePBtB

#WhenAliensMeetNigerians Alien: We are heading back to our planet. Nigerian Immigration: Ha! Oga Alien. Anything for the boys?

#whenaliensmeetNigerians alien: I'm the last survivor of my race. Nigerian: you are not last in Jesus name — Öluwaseyi (@Seyi_Id) August 19, 2015