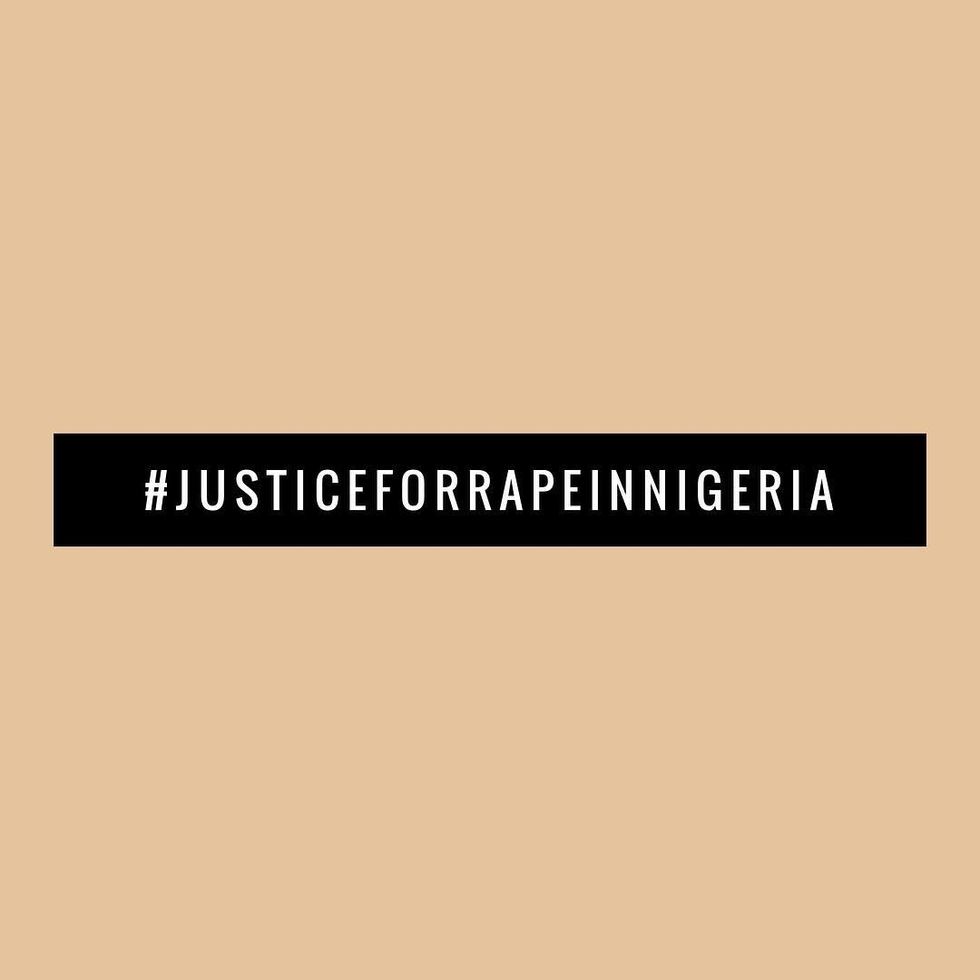 #JusticeForRapeInNigeria is the online movement, demanding that the perpetrators of a recent rape case in Lagos be brought to justice.

Several vocal Nigerians have taken to social media to demand that two young men, accused of drugging and raping a 23-year-old woman on camera, in the Lekki area of Lagos State, be brought to justice immediately.

Initial reports on the arrest of the two men involved—identified as 28-year-old Razaq Oluwaseun Oke and 25-year-old Don-Chima George—varied, with some stating that the two were in custody and others reporting that they'd been let go because of their parent's connections—George is reportedly the son of a wealthy hotel owner.Thiscaused a fury of backlash from Nigerians on social media. "This is Nigeria where anyone can get away with rape," wrote Twitter user KingNelo2.

However, the Lagos State Police have reportedly refuted claims that the perpetrators had been released. According to a report from Pulse Nigeria, Police Public Relations Officer, CSP Chike Oti, released a statement saying that the duo remained in custody at the Kirikiri Prison and had been arraigned earlier in the week.

"The Lagos State Police Command hereby states that the accused persons were arraigned before the Family Court 3, Ogba Magistrates' Court on Wednesday, February 6, 2019, for the offense of conspiracy and sexual assault by penetration to wit; rape," he was quoted as saying.

However, many Nigerians remain skeptical about the validity of these statements as well as the overall handling of the case, and are calling on officials to provide further evidence of Oke and Geroge's arrest to the public.

We have seen your post and we believe you will do the right thing by giving people adequate proof of the accused pe… https://t.co/qSYvL7PHS5
— RUGGEDMAN (@RUGGEDMAN) 1549567271.0

Because of the lack of trust in governmental institutions, many remain uncertain of the true status of the two perpetrators, and the lack of adequate media coverage has only exacerbated feelings of discontent around the handling of the case.

"It is underreported in Nigerian media because Nigeria has abysmal human rights laws and practices and is even more unjust towards women," says London-based lifestyle blogger andFisayo Longe—a vocal proponent of the #JusticeForRapeInNigeria online movement that is currently trending as a result of the mishandling of the case. "It is such a misogynistic society that does not value women," she tells OkayAfrica. "It is underreported in international media because it is underreported in local media, police do not release official statements so there are no verifiable sources for the international media to document the story from."

Several people online have shared similar views, pointing to a harmful, misogynistic culture in Nigeria of not taking allegations of rape against women seriously and a justice system that allows certain wealthy citizens to buy their freedom, thus allowing them to commit crimes with impunity.

Everyone in a position of influence should do all they can to ensure this isn’t another case of someone using “long… https://t.co/pkY6fk9nRG
— Bop Daddy (@Bop Daddy) 1549640951.0

The Law must protect the victim and make her abusers face the full extent of the law #JusticeForRapeInNigeria
— Cinderella Man (@Cinderella Man) 1549552607.0

The immense response on social media shows that despite systemically harmful practices that often silence victims of rape, many Nigerians are unwilling to allow such injustices to continue without speaking out against them. "There [is] a shocking, unrealistically low amount of convicted rapists in Nigeria—they routinely get away with the crime," adds Longe. "It is important that we remain unapologetically vocal because women's lives are in danger—literally."