The Case Of The Missing Budget: Twitter Reacts To News That Nigeria’s Budget Disappeared 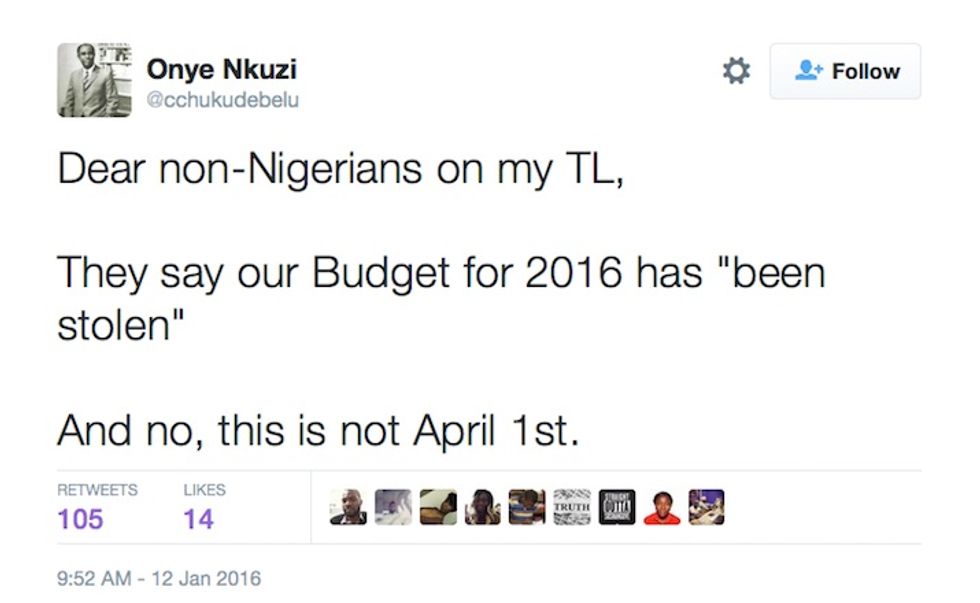 Multiple outlets are reporting that Nigeria’s budget is missing. Nigerians are both outraged and cracking jokes on Twitter.

Multiple outlets are reporting that Nigeria’s budget is missing. What might sound at first like some arcane parliamentary problem is actually literal: Hundreds of documents on which the official 2016 budget was printed, as well as any electronic copies have disappeared from parliament where it was supposed to be discussed today.

The missing documents—which spell out about US$31bn in spending—meant the Nigerian Senate could not go ahead with debate as planned. The opposition is blaming the President who, in turn, blames it on the National Assembly. This comes amid plunging global oil prices which threaten to drain the national coffers.

According to the BBC:

President Muhammadu Buhari delivered the hard copies of his first budget to both houses at the end of last month. It detailed his plans to raise spending by 20% by borrowing heavily amid falling global oil prices. The president, who came to power last May, also pledged to improve tax collection and invest in other industries including mining and agriculture to create more jobs.

As one would expect, Nigerians are both outraged and cracking jokes on Twitter.

To all my foreign followers asking me how Nigeria's 2016 budget went missing. pic.twitter.com/ojVdle1kOE

"2016 Budget is missing/stolen" It would be comical if it weren't so tragic. Is Nigeria being governed by serious people? — Onye Nkuzi (@cchukudebelu) January 12, 2016

At times like this budget wahala, I miss Fela Anikulapo Kuti. Imagine the lyrics he would have crafted...budget come, budget go..

never in the history of Nigeria have there been this expensive joke. How Can a Budget be missing #WhoStoleOur2016Budget — EDOBOI erunz (@Eromosele6) January 12, 2016

Be on the look out Nigerians. Be patriotic. Examine any paper used to wrap your suya tonight closely. #WhoStoleOur2016Budget?

Oddly the funniest stuff seems to be coming from South Africans.

I know who stole Nigeria's budget after Nigeria claimed to have replaced RSA as largest economy on the continent ? pic.twitter.com/h3b9r4m4HP — Bulelani Mfaco (@BulelaniMfaco) January 12, 2016

i take it this whole Nigeria budget thing its an inside joke only Nigerians get... — Nomalanga Mkhize (@NomalangaSA) January 12, 2016

The tweets about Nigeria's budget going missing... Do we mean the paper or the cash monies *for* the budget? pic.twitter.com/9xBCjf9M9B — Gugulethu Mhlungu (@GugsM) January 12, 2016

SA newspapers, before you report that the Nigerian budget has gone missing, can you please call a Minister or something — Nomalanga Mkhize (@NomalangaSA) January 12, 2016

Listen, if SA needs to send someone to Nigeria, to help look for the budget, I'll go. For my loins, I mean, nation. pic.twitter.com/vwvOerU94l — Gugulethu Mhlungu (@GugsM) January 12, 2016

A whole country has pulled the " my cat ate my homework excuse" .Nigerians are amazing. #nigeriabudgetpic.twitter.com/zKUAgxWuCi