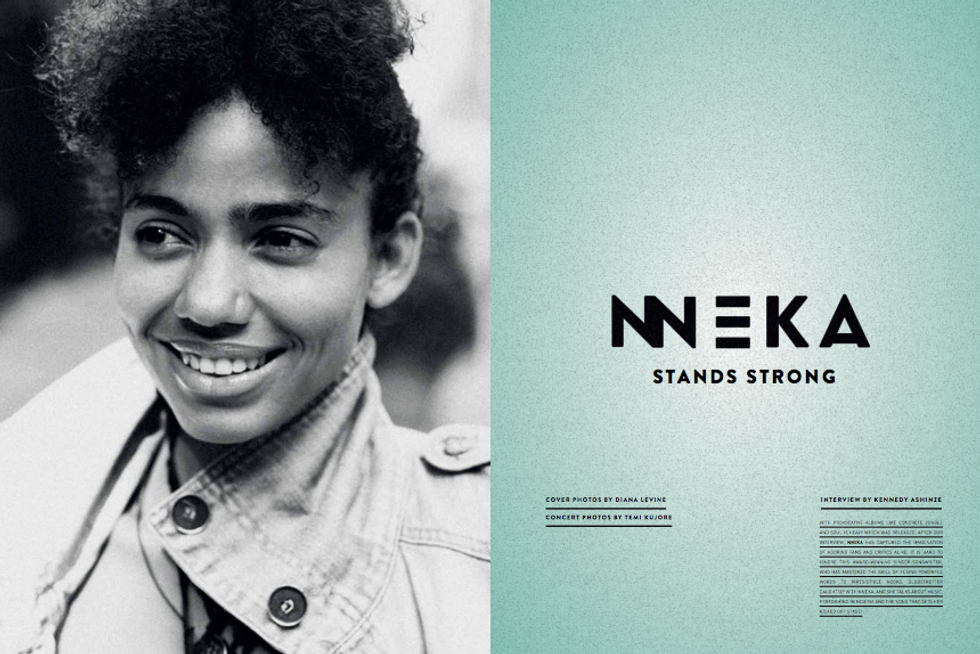 Globetrotter Magazine is a new lifestyle print publication that creates original content revolving around art/ design, music, style and movements. As the title implies, Globetrotter distributes on four continents — specifically in London, Japan, Lagos, Singapore, Jakarta, and Chicago. Their impressive maiden issue, which is immaculately designed, features the ever talented Nneka along with a spread on artist Delphine Diallo and DJ Rich Medina. Check out an excerpt of their interview with Nneka below.

What does it feel like to perform in Nigeria? What kind of reception do you get?

Performing in lagos is always a good thing, the audience is outgoing and connected to my music. when I went to Port Harcourt—there was a Niger Delta Peace Concert I was doing and we were touring with a couple of other artists, and that was a bit challenging to a certain extent. But at the same time, I realized my music was not as unknown as I thought. I used to think one had to be very traditional to connect to people’s minds. But as long as you speak a little  pidgin english here and there, and you don’t act like somebody that’s above others, you’ll be fine. I noticed in Port Harcourt and the International music  festivals I was involved in, while in Nigeria, those were shows where the people really needed to hear the message in my songs. I made a short speech before I started the song "Vagabond In Power", and I realized how truly scared people were. In Nigeria, you are taught to respect your elders and all, but your respect is really not respect as it should be, but fear.  you basically live in fear and there’s no way to express yourself. Even if you had the opportunity to express yourself, you wouldn’t have the courage to, because of that fear instilled in you as a child. And that is the problem with our community, even within our families. I’m not saying we should now push aside tradition and how we were raised. But the truth is, in my case, I never could look my father in the eye. If you were talking to your father, you would be looking at your toes, you know what I mean?  You don’t even know who your father is. It is only now I’m finally getting to know my father, which is actually a shame because he’s almost 78 years old, and I don’t know anything about him. I don’t know if that has to do with tradition or some complex imposed on us but it’s not good and we’re still maintaining it. I don’t know where that comes from, but as far as I’m concerned, I don’t think that’s the way our forefathers lived and wanted it.

There is a thin line between  fear and respect, which gets blurred From time to time. So you do raise an important point.

At the Port Harcourt Concert, when I sang my VIP song, I remember it being a pretty serious and intense atmosphere. A lot of people, about 10,000, they were all singing along, Vagabond In Power. It was so serious and intense that the SSS (State Security Service) came to throw us off the stage. They came to harass us and wanted to arrest us, and eventually they threw me offstage. To the glory of God,  VIP is a song I always play last, because I know I will have gotten my whole show in before I get kicked off.

In the past, you have spoken about how Nigerian artists have to get approval  or validation across the Atlantic before they get recognized at home, can you elaborate  on that?

Well, you know how it is. People like Fela Kuti, Keziah Jones, Seal, Sade, Asa, and many more - their music had to be acknowledged outside Nigeria before our own people acknowledged them. I don’t know where the root of this actually lies. But you see other artists like 9ice and 2face, they are considered local Nigerian artists and don’t really have a big name outside Nigeria or Africa. The question then becomes, does that mean once you get validation from your own people back home, you have to remain local? I don’t know.