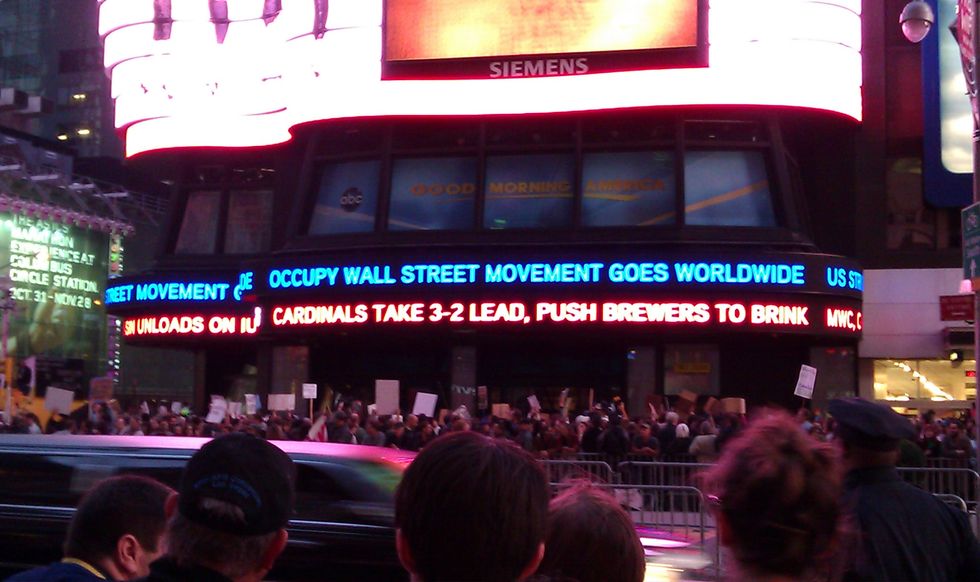 Over 20,000 people gathered in Times Square on Saturday to show solidarity for the Occupy Wall Street movement. The Occupation Party - aka the "celebration block" - lead the thousands in a rendition of civil rights anthem "This Little Light of Mine" accompanied by a brass band, during which over 2,000 sparklers lit up Times Square. Were Kweli, ?uesto, Kanye, and Angelique there? Who knows. The party was too damn good to pay that any mind. But they are here, showing their support.

Back at Zuccotti Park the next day, the daily "General Assembly" met - open to anyone who wants to participate in the movement. The movement's process of participation is deeply democratic, egalitarian, and non-hierarchical, and, according to controversial former Yale professor and activist David Graeber, is drawn from the practices of the Tsimihety ethnic group in Madagascar.

According to The Chronicle of Higher Education:

It was on this island nation off the coast of Africa that David Graeber, one of the movement's early organizers, who has been called one of its main intellectual sources, spent 20 months between 1989 and 1991. He studied the people of Betafo, a community of descendants of nobles and of slaves, for his 2007 book, Lost People. Betafo was "a place where the state picked up stakes and left," says Mr. Graeber, an ethnographer, anarchist, and reader in anthropology at the University of London's Goldsmiths campus.

In Betafo he observed what he called "consensus decision-making," where residents made choices in a direct, decentralized way, not through the apparatus of the state. "Basically, people were managing their own affairs autonomously," he says.

The process is what scholars of anarchism call "direct action." For example, instead of petitioning the government to build a well, members of a community might simply build it themselves. It is an example of anarchism's philosophy, or what Mr. Graeber describes as "democracy without a government."

Fascinating. We'd love to hear more about this from anyone out there who is a scholar. Hit us up in comments or on twitter.