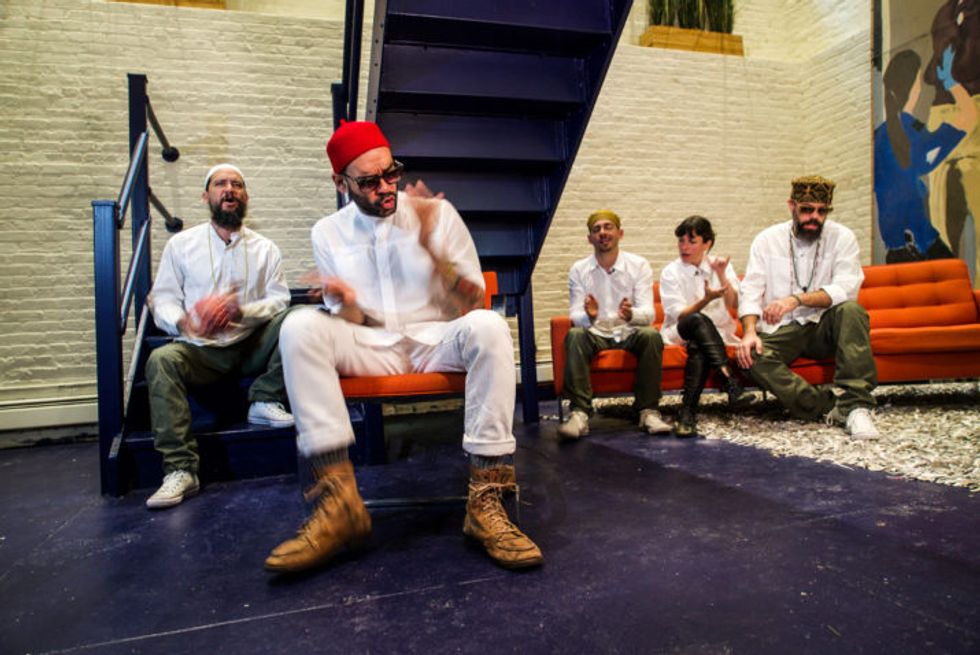 The lead singer of ÌFÉ breaks down the Afro-diasporan spiritual dimensions of his song BANGAH (Pico y Palo) and performs an acoustic version that will stir your soul.

PUERTO RICO—Okay Acoustic is a series of unplugged videos with our favorite musicians. For this installment we linked up with the Puerto Rican band ÌFÉ to do an almost-acapella version of a song from their new album "IIII+IIII" (pronounced Eji-Ogbe). As a special treat we asked lead singer Otura Mun—a Babalawo or priest in the Ifá tradition—to explain some of the spiritual dimensions of the song and its relation to the orisha Ogun.

"BANGAH (Pico y Palo)" is a reflection on the meaning of and path to freedom, starting from a personal level and expanding from there. When I first heard the beat for the song I knew that the theme was going to be war. This sounded and felt like a war song. That presented a somewhat obvious challenge for me as a songwriter since the name of my project is ÌFÉ, which means "love" and "expansion" in the Yoruba language, reflecting the broader themes that I'm trying to communicate musically. I also don't believe in war as a way to solve human conflict. But whether I agree with war or not, conflict is real, and freedom equally so. We can be free.

So, when we talk about war as practitioners of the Yoruba faith, we immediately look to the orishaOgun, who in the Yoruban pantheon functions as the owner of war. If we want to be successful in war or prevail in conflict we fortify Ogun and ask for his aid. Ogun is blacksmith of the religion and his main tool or weapon is the machete, followed of course by the anvil.

Now the machete is a political symbol here in Puerto Rico. Los Macheteros were a group of Puerto Rican freedom fighters formed in the mid 1970's. The machete is seen as a symbol of the fight for freedom on the island. With that in mind, I tried to imagine Ogun as the "divine Machetero." Ogun's energy is also mirrored in a separate Afro-Caribbean religious practice from the Congo people called Palo. Here Ogun's energy is called by the name Sarabanda and he is known as the owner of the forest or mountain. In the song I say, "when you hear my machete strike the anvil, Sarabanda!"

Now the word anvil translates to "El Yunque" in Spanish, which is coincidentally the name of Puerto Rico's national forest. So little by little we're starting to build multiple layers within the song. Ogun is also the owner of work (therefore the line about Rihanna), and so I tried to think about what it takes to free yourself on an individual level. How do we implement fundamental change in our lives in the face of real resistance to that change.

For me I understand this as a process of making a decision to achieve something, naming our goal in front of God and man, and then committing to work towards that goal with death being the only thing that could possibly stop you from attaining it in the here and now. And of death, we shed our fear, knowing that Ogun gives us the strength and courage to prevail. That is the sentiment behind the song, but there are many levels working here.

The phrase "As-Salaam-Alaikum" is heard throughout the song. The Arabic phrase, meaning "peace be upon you" is actually a greeting used between initiates of the aforementioned Congo practice of Palo. Using it in a non Islamic way, the greeting announces each person's commitment to the practice that uses Sarabanda's energy as it's driving force. The phrase also struck me as an example of revolutionary speech of the times, in the same way that we saw the peace sign in the 60's or we used to say "peace" when we hung up the phone in the 90's. The message and it's language resonates in this moment. This movement is one of peace.

Finally, the phrase "Bangah, Ogun arere afeyesi, aguanile" comes from a song that is sung during the ceremony called pinaldo or "cuchillo santero." This is a ceremony that marks an individuals actualization inside of the religion, it marks their ability to stand and perform ceremonial tasks independently of their mentors or godparents. This knife ceremony represents personal freedom, and the orisha that gives you this knife is the owner of all metals—Ogun.

So, BANGAH becomes a plosive war cry for freedom. I actually got this phrase from an elder in the religion named Emilio Barreto. Emilio is an akpwon, or ceremonial singer from NYC. He heard the beat for Bangah and added the final line after hearing a actual machete sample in the song that I pulled from the video game Assassin's Creed. The sound of the machete strike reminded him of the word Bangah and the phrase from the song. His insight helped to ground my thoughts on subject and tie everything together into one powerful chorus.

Much of what you see in the writing process on this album is reflected here in this song. I made Ifá and became a Babalawo in the Lucumí practice 2 years ago. That initiation is a literal rebirth, a fundamental change in the way I understand the world around me and my purpose in it. It's a life long commitment to service of my fellow man and study inside the practice. So a lot of what you hear on IIII+IIII at least in terms of the lyrics is me sort of working through the changes I perceive in both the spiritual and physical worlds as I explore them in a day to day way.

As I discover or struggle to understand these forces in my life, I'm writing and creating music that reflects that journey. You're hearing evolutionary process as the foundation for creative work.

Big thanks to David Slitsky for mixing the audio