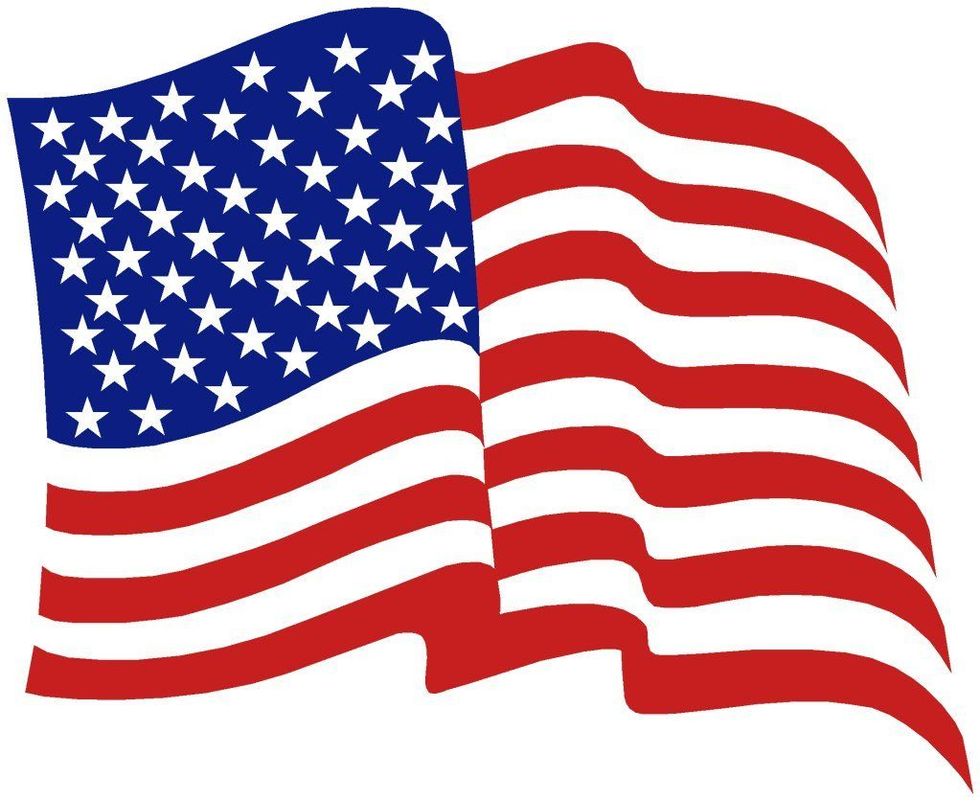 We're rounding up all the American election related weirdness in one place. And the serious stuff too. Although they tend to overlap these days.

We are updating this space for the next 24 hours with all American election related news, opinions and artifacts. Expect it to be weird.

Here's What We Predict

Okayafrica's official projection has Clinton beating Trump in a squeaker. Our team of statisticians and spiritual mediums predict a strong showing for Clinton in the population centers along the West Coast and the Horn, while Trump, as expected, takes fly-over country—with much of the Great Lakes region swinging rightward and a strong showing in the Maghreb heartland.

The big story of the night will be an Evan McMullin victory among the Burkinabe and a suprise Gary Johnson split in Libya, leading to that country's sending its electoral college votes to the Democrats for the first time in three decades.

What Happens if Donald Trump Loses and Won't Concede?

NBC news asked legal experts about what would happen if Trump refuses to concede. The answer, at least from a legal standpoint, is nothing. From NBC:

"The concession speech itself has no legal status," said Edward Foley, who runs the election law program at Ohio State University.

"It's more part of this cultural expectation," he told NBC News, adding that Trump has clearly "suggested he wouldn't give the typical concession speech."

Scott Farris, a historian who studies losing presidential candidates, said Trump is also unusual because he is unlikely to be constrained by his future standing within the party.

"Because Donald Trump is not conventional politician looking ahead to run again, he's going to have less inhibitions in criticizing the result and the process," he said.

Chalk this up to the strength of American institutions. What the article steers clear of, however, is any speculation about what a large continget of armed and angry Trumpists roaming the nation's streets could do given some encouragement from the man himself.

There's no need for words.

Historians will look back at this video and say this is why Hillary won the election pic.twitter.com/aaAKHIKPyv

In what's quickly becoming a tradition, the residents of President Obama's ancestral village have held a mock election even though their favorite son is no longer in the running. If you want to view the Kogelo poll as some kind of omen—and it hasn't been wrong yet—then Hillary is going to win this thing in a landslide. The Kogelonians certainly like to push this narrative. From Kenya's The Standard:

"In 2008, we organised the event when President Obama competed against Senator John McCain, and in 2014 when Obama defended the seat against Mitt Romney. And in both cases, Obama went on to win as we had predicted in the mock election. We believe what has happened here will be replicated in the US elections," said Lawrence Oyange, one of the organisers.

According to The Daily Nation neither Malik Obama, POTUS' Trump supporting half brother or Sarah Obama, his grandmother took part in the venerable insitution.

Awesomely Luvvie on Why She Voted for Hillary Clinton

Writer and author Awesomely Luvvie has shared a pretty spectacular essay summarizing her thoughts on this election and why she's #WithHer titled "About the Election from Hell and Why I Voted for Hillary Clinton." The full thing was posted yesterday—if you haven't read it yet, we recommend you do so here. Here's one highlight:

NOTHING. Not a damb thing. Not an ounce of a gram of a thing, can compare to the fuckery that has been Donald Trump, his campaign and the fact that he is literally Hilter’s mentee. He has made this an election from hell. He’s threatened to build a wall to keep Mexicans out and ban Muslims from entering the U.S. He’s made fun of someone with a disability and called a soldier who died at war into question for his patriotism. He has been the boil on all our collective asses, and turned politics into a bottom barrel reality TV show. He’s become BFFs with Vladimir Putin and challenged the Russians to hack into United States government property. The KKK has endorsed this troll.

Ushahidi, the much lauded Kenyan crisis mapping organization is using their platform to monitor incidences of voter intimidation, ballot issues and other election mishaps across the United States today.

Started in 2008 to monitor the disputed Kenyan elections, the platform has been used in a wide variety of crises' including emergency response after the Haitian earthquake and election monitoring all over the world.

"The team is currently combing through social media and dealing with messages sent directly to its platform, verifying the content before escalating to the right people."

Trump, As Africans See Him

For our first update on Election Day, we revisit an op-ed written back in August from New African Magazine discussing the complex and nuanced views Africans have of Trump on the continent:

'For me, as an African, there’s just something familiar about Trump that makes me feel at home,' quipped the South-African born Noah, whose comic sketch superimposed military regalia on a picture of Trump.

To other observers, however, the comparison is no laughing matter. African leaders have too frequently used propaganda and xenophobia to sway voters, as Nigerian journalist Chude Jideonwo warned in May. 'Trump follows in this distressing tradition, a politician in a fact-free zone,' Jideonwo added, 'telling people what they want to hear without the interruption of reality.'

These Somali women spoke to the BBC about their disdain for the GOP candidate, after he came to Minnesota and insulted their community, including:

'Here in Minnesota, you’ve seen firsthand the problems cased with faulty refugee vetting, with large numbers of Somali refugees coming into your state without your knowledge, without your support or approval,' he said. 'And with some of them then joining ISIS and spreading their extremist views all over our country and all over the world.'

Have a look at the hooyos' reactions below:

How Philadelphians Are Organizing to Fight Voter Intimidation on Election Day

Philadelphia officials are mobilizing the largest election protection force in the city's history, after nationalist leaders encouraged by Donald Trump's calls to "watch" African American communities threatened to do just that.

'We’re prepared but not scared,' Rev. Alyn Waller, the pastor of Enon Tabernacle Church in northwest Philly, told me as he took a break from organizing a voter protection effort. 'Donald Trump and his supporters are harkening back to a different time in this country… But we’re just not afraid of them anymore. Our country has changed. If anything I pity people who are still stuck in that silly mindset.

As the largest city in a swing state, the turnout in Philadelphia could play a big role in who wins the election. Pennsylvania has no in-person early voting, unlike several other states with tight races, so smooth sailing at the polls on Election Day will be especially critical.

Stevie Wonder: Voting For Trump Is Like Asking Me To Drive

The music icon who is blind made the comparison during an interview with Philly.com after his Get Out The Vote concert for Hillary Clinton on Friday in Philadelphia.

“If you had an emergency situation and needed to go to the hospital, and you had to get there right away, would you want me driving your car?” he asked, to which the reporter replied “no.” He added, “Because I’m not an experienced driver, right?”

Auntie Jenifer Lewis has spoken again—and we'd better listen. Over the summer she made it known to the world with Brandi and Roz Ryan that she's not the one to be messed with in these streets.

Now, in what she calls "THE MOST IMPORTANT VIDEO I'VE EVAAH MADE," Lewis wants us to get our asses out and vote.

A Senegalese comedian is getting rave reviews for his Donal Trump impersonation. As reported on NPR, the "Kouthia Show" is wildly popular in Senegal and Senegalese communities worldwide for its high-energy take on American politics from a uniquely Senegalese viewpoint.

According to the article, the Senegalese community in New York has long hated trump.

It's actually a bitter relationship that goes back to the 1980s, when Senegalese peddlers tried hawking their wares in front of Trump Tower on Fifth Avenue in New York.

Trump alleged at the time that the Senegalese were part of a scam, trafficking in stolen merchandise, and that most of them, according to Trump, worked for "a small band of extremely wealthy people who probably have big homes in New Jersey and Connecticut."

The vendors all denied that.

In this video Donald Trump goes to a village shaman in order to acquire a potion that will propell him to the White House. There's a twist though.

107-year-old Donella Wilson said she cast her first vote in the 1940s and has not missed a local or national election since.

Now, Wilson ― who was born in South Carolina to parents who were former slaves ― says she is as ready as ever to cast her vote in the state on election day.

This Hillary Street Style Instagram account makes the case for a Clinton presidency by comparing her to some of the greats. Take it for what it's worth.

The times they are a-changin', but we can pretty much guarantee that Lupita Nyong'o (in Balmain) and Michelle Obama will continue to be two of the best dressed women in the world #pantsuitfriday #hillaryclinton #michelleobama #suitup #tgif #FLOTUS #lupitanyongo #pantsuit #streetstyle #lookoftheday #hillarystreetstyle