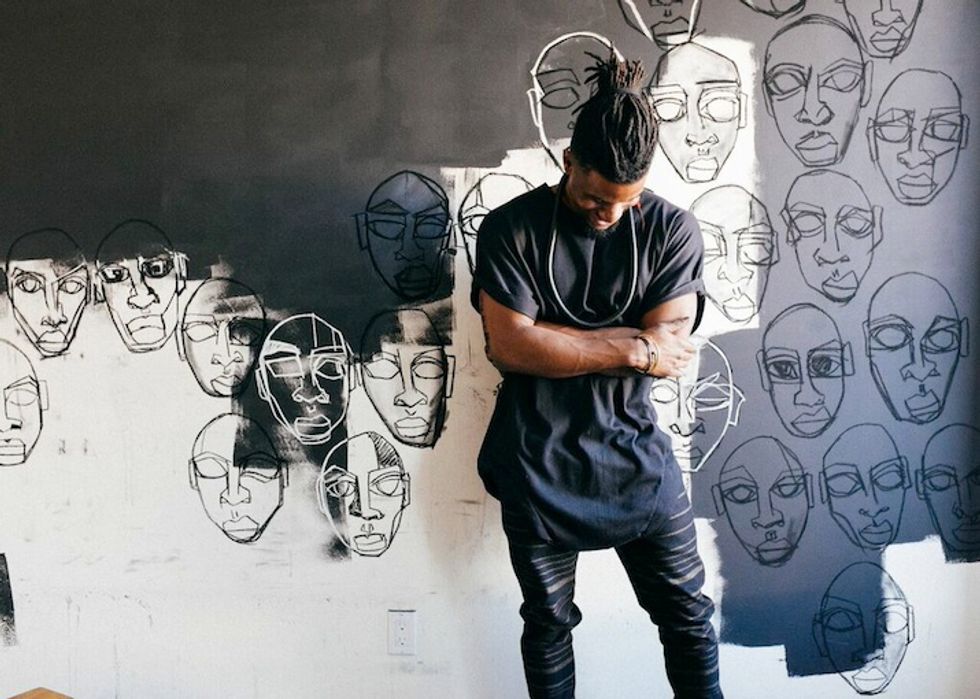 Oluseye reinterprets the Yoruba concept 'Ori' with geometric figures and faces in his debut exhibition at Gallery 151 in NYC.

Nigerian-born creative Oluseye (Seye Ogunlesi) says his works combines his interest in Yoruba culture and geometry to explore universal themes of sexuality, spirituality, and identity. With his debut exhibition, he looks to deconstruct and reinterpret notions of Ori, the physical and metaphysical concept and term that translates literally to "head" in Yoruba. According to a press release, the series, now on view at Gallery 151 in New York City, sees the Toronto-based visual artist and designer create "a visual narrative in which concepts of identity & being, body & mind, sex & sexuality, the physical & spiritual are vital and fluid constituents of Ori." Oluseye, whose BLKKANGAROO clothing label recently shared its "Afro-Kabuki"-themed streetwear editorial, shed some light on his work over email.

Okayafrica: What sparked your interest in Yoruba culture?

Oluseye: My name is Yoruba. My family is Yoruba. I grew up in Lagos, which has one of the largest Yoruba populations in the world. Culturally and socially, I was raised Yoruba so it’s always been in me, just latent.

Okayafrica: How did you intend to explore sexuality, spirituality and identity with Ori? What did you want to say about these themes and how do they relate to Yoruba culture?

Oluseye: The Yoruba believe that Ori (head) is the most important part of a person – anatomically, as the locus of the sensory organs and mental faculties; and ontologically, as the source of a person’s personality and destiny. Using ORI as a symbol of the tangible and intangible, I explore sexuality and spirituality, not as a rigid dichotomy, but instead as fluid and essential elements of one’s identity.

Oluseye: I grew up in Lagos, and much like the city, my childhood was really busy. I come from a huge family so it was either super exciting or super chaotic - nothing in between, really. I spent a huge chunk of my time swimming and biking around my neighbourhood probably because it afforded me the time to be in my own head. I kept a small vegetable garden with my siblings and once a week I went to my grandma’s house for handwriting classes and to help out with chores. I rarely watched TV (still don’t) but I read a ton of books I am too embarrassed to admit to.

Okayafrica: What projects have you been up to lately?

Oluseye: My debut solo show, ORI, opened 2 weeks ago in New York City - it's on at Gallery 151 until mid May. Least to say the last few months have been some of my busiest. I also managed to squeeze in a commission for the Art Gallery of Ontario’s Scratch and Mix Youth Project, which is running till mid August in conjunction with their Basquiat: Now’s The Time exhibit.