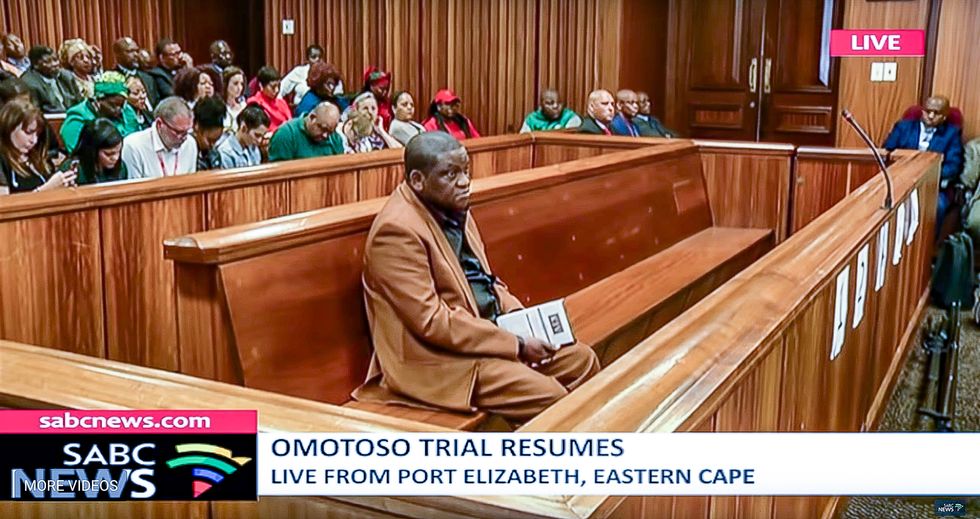 South African women are enraged at the way the defense seems to blame women for their own abuse.

"How long was the defendant's penis? You didn't measure it? You allowed him to rape you? You're a good actress." These are some of the victim blaming questions posed to one defendant, Cheryl Zondi, in court last week during the trial of Timothy Omotoso.

Omotoso, a Nigerian televangelist of the Jesus Dominion International Church is on trial for 63 charges including human trafficking, rape and sexual assault. His church in Port Elizabeth has since been shut down following a march by over 100 people.The allegations toward Omotoso from 30 young women have transfixed South Africans—the latest example of so-called "holy men" taking advantage of their congregants. The trial resumed today as the second witness took to the stand.

Omotoso's attorney, Peter Daurbermann, posed these disgusting questions to Zondi during his cross-examination of her. Watching clips of the trial proceedings, I have never felt my blood boil quite as much as it did then especially when it resulted in Zondi breaking down. The way in which Omotoso's attorney insults her dignity in public has shown just why rape culture and its victims would rather live in silence altogether.

While I understand that Daurbermann was "doing his job," it's clear he was doing it rather badly. He didn't have to do it that way. It was a line of questioning that had nothing to do with getting to the truth of things and instead only serves to reinforce the victim-blaming that is so rampant in this country. Worse still, this is happening in what is supposed to be the chambers of justice. It got so bad at one point that the presiding Judge Mandela Makaula, had to intervene and reprimand Daurbermann, a move which led to him being accused of protecting the witness; as if putting an end to the dehumanisation of an already traumatised victim was an act of partiality and not humanity. Today, Daurbermann asked Judge Makaula to recuse himself because he (Daurbermann) felt that Judge Makaula could not be impartial to which Judge Makaula refused. Outside the courts were both women who stood with Zondi in solidarity as well as those who supported Omotoso— a few members of our own ANC Women's League, clad in ANC regalia, were even seen protesting in support of Omotoso.

I think about Khensani Maseko who committed suicide a few months following her rape at the University Currently Known as Rhodes (UCKAR) which had neither been addressed or investigated by management. The conversations around her death, especially from men, only served to illuminate why rape culture will never end in South Africa.

I think about "Khwezi"—(allegedly) raped by former President Jacob Zuma and how badly she and her family were treated until she died. I think about the pregnant woman who was gang-raped in front of her 10-year-old son. I think about police officers who still turn away victims of rape and sexual assault because they'll "ruin" their perpetrators lives or—when they don't turn them away—don't know the basics of administering a rape kit and vital evidence is lost. I think about my own experiences with men who have sexually assaulted me and how one still has dinner with my parents at times and the other, who I called out on social media, apologized "for my allegations" and went on to "wish me well with the novel I am writing." I look at how Minister Naledi Pandor has organized an emergency meeting to discuss why there were 47 reported rapes at universities across the nation. Who knows how many else went unreported?

Women are in crisis in this country, and it shows no signs of slowing down. In fact, I have the sinking feeling that the absolute worst is yet to happen. Every time I hear of yet another rape case, I think that it cannot possibly get worse. But then it does.

On social media, many have praised and even celebrated Zondi's bravery on the stand. But there is no celebration here. Sure, we can attest to her incredible portrayal of strength in the face of not only a crass and tasteless defence attorney, but also the wife of her rapist who continuously laughed and made gestures as Zondi spoke such that Judge Makaula reprimanded her as well. We can attest but we cannot celebrate. This is also not a moment where we should seek to invoke the "black woman's superhero complex"—our longstanding ability or rather expected ability to constantly endure adversity and wear it as a badge of pride and honour.