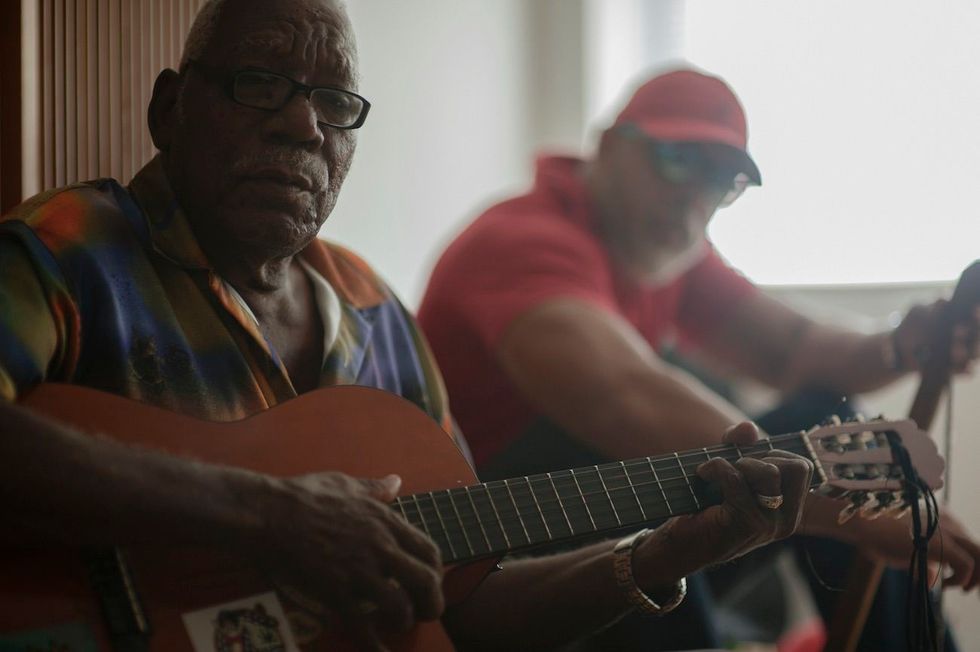 In their new album, 'Baile Bucanero,' the group Ondatrópica go deep into the Colombian Caribbean and the island of Providencia.

Ondatrópica is a Colombian supergroup lead by Mario Galeano, of Frente Cumbiero and Los Pirañas fame, and the British DJ Will Holland (also known as Quantic).

For their self-titled first album, released five years ago, Galeano and Holland reunited the incredible but forgotten musicians of Colombian tropical albums from the glory days of vinyl. They recorded together, resulting in of the most nostalgic and danceable records in a long time.

In Baile Bucanero, Ondatrópica tried to repeat the formula, this time going deeper into the Colombian Caribbean and the island of Providencia. Part of the Archipelago of San Andrés, Providencia and Santa Catalina, this small island (called “Old Providence” in the local English creole) is home to five thousand people, many of which claim raizal ancestry, that is, to be descendants of the African slaves that the British brought to plantations on its various Caribbean colonial possessions.

And though Providencia is closer to Nicaragua’s mainland than to Colombia, it's officially part of the latter, a situation that has caused frequent diplomatic and political tensions, but that has also enriched the culture of the islands with a folklore unlike any other found in Colombia.

I spoke with Galeano about the new album and the relationship between Providencia and mainland Colombia.

What was the idea behind Baile Bucanero?

We wanted to explore some concepts different from the ones we did with our first record. It was very much focused on the Colombian sound of the 1950s and 1960s, a sound recorded in Medellín, where all of the studios of the Colombian music industry were at that time.

With this second record we wanted to approach tropicalism from a different angle. Mainly, we wanted to explore how the music of the Caribbean thrives from a deeper code than the code imposed from the colonial powers. There's an English Caribbean, a French Caribbean and a Spanish Caribbean, among others, and all of their music shares a great deal of codes that unite them in a profound way.

We wanted to take advantage of the case of Providencia: a Colombian island in which English is spoken, a lot of the population is black, and lives in the middle of this dilemma. We wanted to record on the island, taking advantage of a studio that was set up there, and we wanted to bring over people from continental Colombia. This is a pretty professional recording studio in an island with about two thousand musicians, that’s an incredible luxury.

Mario Galeano and Will Holland of Ondatrópica. Photo Credit: B+.

How was your approach to the music and the musicians of Providencia? How were you received?

It was a project that brewed little by little. We started to know Providencia musicians before going there, mainly thanks to Elkin Robinson, one of the key musical figures of the island, and through the studio set up by the Ministry of Culture there. They were an important link for us to get closer to the musicians and for being able to invite them to the studio to record with us. It was beyond finding a musician to play, it was about finding a lingua franca to be able to play together.

Did you record the whole album in Providencia?

We also recorded for four days in Bogotá, because going to Providencia is cost-prohibitive. There were a few musicians here in Bogotá with whom we wanted to record, but we couldn’t take them to Providencia. So we brought some musicians like Justo Valdez from Son Palenque, or “Tomate,”Fruko y sus Tesos’ pianist. Other musicians were already here, in particular our colleagues from Los Pirañas and Frente Cumbiero.

What are those shared musical Caribbean codes?

There are many things, for example, the bridge that forms between Panama and the Pacific is interesting, the connection between the Caribbean and the Pacific through Panama. Panama, having both coasts, just like us in Colombia, has a common tamborito, a common bullerengue, and it has been one of the largest epicenters of calypso in the Caribbean.

In the 1910s and 1920s, when the Panama Canal was being built, many workers from Trinidad & Tobago arrived there. They brought their calypso and established it there. Then you can hear how people from Panama and Córdoba [a region of Colombia close to Panama] add a calypso guitar to their cumbias. This was the starting point for our record.

On the other hand, calypso is a sort of equivalent to Cuban son, a kind of matrix from which many things emerged. Both genres have a lot of shared instruments, mainly the claves. There was a similar feel, but every country eventually found its own musical identity. Music from Cuba and Jamaica, or from Trinidad & Tobago were in constant conversation in the first half of the 20th Century. But, by the 1960s, they had split and were not dialoguing anymore. We wanted to approach those dialogues and show how these are the same currents that took on different paths.

Why did these musical nations stopped their conversations then?

Because the music industries of these countries grew more and more, kept releasing more records and the local scenes grew. There wasn’t a necessity of nurturing from outside music anymore.

What has been the musical conversation between Providencia and the rest of Colombia like?

There is a preference in Providencia for vallenato [an accordion-heavy genre from northern Colombia]. But they don’t listen to porro or champeta [other genres from northern Colombia]. On the other hand, they do tend to like pasillo and bambuco, which are genres from central, mountainous Colombia, and they play them with instruments typically found on the island, like the mandolin.

They play pasillos to fit in, somehow, in the idea of Colombia. Yet, the national government has been evidently disinterested in most of what happens in Providencia. So the people there have moved on, independently, and have embraced other influences. They feel a great deal of affinity for the Cayman Islands, where many of the grandparents and great grandparents of the island come from. They are also very close, physically and culturally, to the Caribbean coast of Nicaragua. They feel closer to the Garifunas [a mixed race of indigenous Arawak and Carib people and shipwrecked African slaves who found each other in the Carribean island of St. Vincent, but were then displaced to Central America] of Nicaragua, and the black people of Jamaica than to Colombians.

Mario Galeano and Will Holland of Ondatrópica. Photo Credit: B+.

How was the research for this album?

Willian and I spent a long time investigating this kind of music. He and I are record collectors, and that leads us to different kinds of music. But I have always been interested in the socio-historical aspect of musical movement.

The core of our project goes beyond making music. It’s based on research and concepts we translate into songs. But we have a more aesthetic approach: instead of writing a book, we create a record. We also wanted to take a fresh look at this conversation of sounds, being careful not to become “fusion.”

Latin American music has an African ancestor, an indigenous ancestor and a European ancestor—many people take advantage of that to spin it and make it more commercially viable. We wanted to avoid that concept of fusion and, instead, we wanted to look for a common ancestor, look for those points in common in the past that truly highlighted the heritage of the music, and don’t try to sound contemporary.

When you were in Providencia, how did you see the relationship between the people there and the rest of Colombia?

There is a deep mistrust of the people of continental Colombia, to be honest. There is a lot of protectionism on the island. They don’t like when other people buy plots of land to buy hotels or something like that. But there’s also some sort of resignation to being Colombian. The musicians there do care about the music happening in the continent. Also, in the past five years there has been a push to bring San Andrés and Providencia’s music to continental Colombia. And the musicians from the islands know that the place where their projects can take off is cities in the continent, playing in Bogotá, Medellín, Cali or Cartagena.