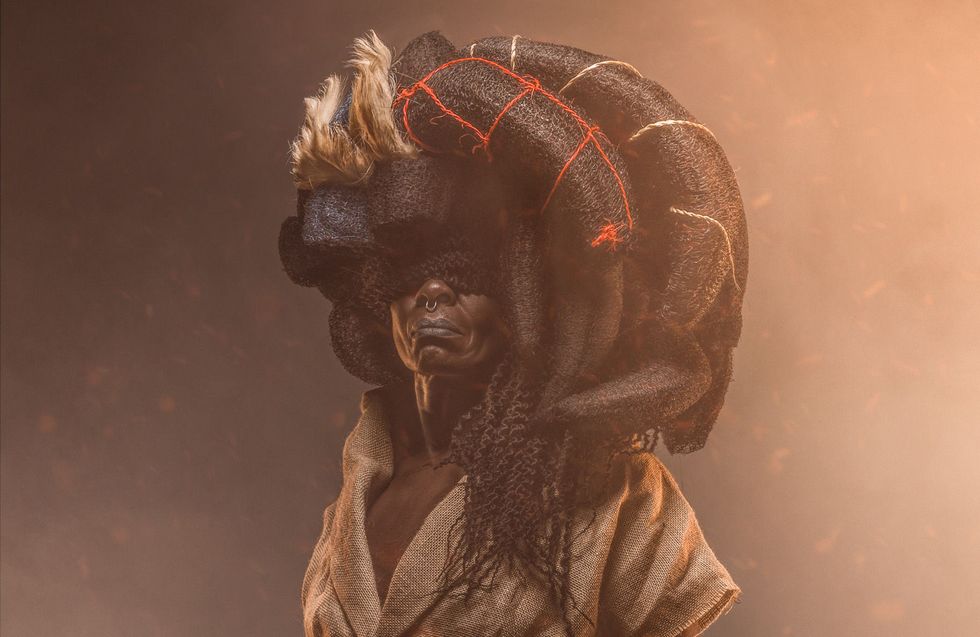 We catch up with Kenyan photographer Osborne Macharia on his inspiration behind his photo series, KIPIPIRI 4.

Osborne Macharia is a Kenyan art photographer whose popular personal projects portray Kenyan women in powerful positions. His efforts have led to awards and the acknowledgement of famous fans such as entertainer Jamie Foxx. His use of art, lighting and local subjects made him a break-out star last year with series: Kenya’s League of Extravagant Grannies.

KIPIRIRI 4 honors female freedom fighters who seldom get the props they deserve, but looking at Macharia’s images, you will question their lack of representation in popular culture. His pictures are a glowing tribute to the women who fought for Kenya’s independence in 1963 during the Mau Mau movement, but never got their due.

The fictitious series, KIPIPIRI 4, features majestic manes that are symbolic of the roles each woman played in a village located in the Kipipiri Forest. One woman hides weapons in her hair; another uses her singing voice to inspire her community; the remaining two focus on transporting food and communicating secret messages all using different coiffures.

“We were trying to play with a futuristic perspective and a traditional perspective,” Macharia says, explaining the outfit and headgear. The fantastic four (Bobo, Chep, Achi and Mwende) are the Mau Mau generals’ wives, who are brave, resourceful and instrumental in winning the war against colonialists. The hardcore women of Kenya’s emergency period may not have their names on street corners or in textbooks, but Macharia and hairstylist Corrine Nyumoo worked to honor the many women who contributed to the fight for freedom. Macharia spoke to OkayAfrica about his popular work which makes him a social media favorite.

Josephine Opar for OkayAfrica: What was your understanding of what the Mau Mau movement was before you embarked on this project?

Osborne Macharia: My understanding was that it was a liberation movement that brought us closer to independence, giving us freedom. Without that movement, I don’t think we would have been able to achieve our independence as early as we did.

My grandma and my grandpa were part of it and they suffered with the consequences of being part of that movement… They were in concentration camps for a better part of their early years, so when they were released, they were old. They were not as energetic as when they got in. I didn’t hear this from them, I heard it from my mom. She was the one who saw the effects of what they went through.

When I was doing this project, it was sentimental to my mom who played a role in trying to give some information [to inform the project].

How did the concept come to be?

It came around July 2016, during a shoot for a beer brand with a hair stylist [Corrine] I’d worked with before on [other] projects. While talking to Corrine, she mentioned doing a shoot in memory of Mau Mau women, and that conversation led to the KIPIPIRI 4 project.

What is the significance of the hairstyles?

Every character has a defining element. Without the hair there would be no shoot at all. I explain further on Instagram—Bobo is the leader so she had this thick hair. We made it out of a plant that is used in Kenya’s coastal region that we colored black. You can see a pattern where there are strings of red. The idea was that she hides a road map in her hair which only the second-in-command can interpret. The red lines depict the places that are dangerous.

The second-in-command [Chep] hides weapons when they are going into the forest. Achi and Mwende’s headpieces took the longest to put together on set. Achi’s is actually a basket. If we go to Mwende, the last picture where she has this mouthpiece, she would speak into the pipe and it would resonate over her hair, like a speaker.

What was your goal in terms of who it would reach or the type of emotions it would evoke?

For me, it was the women who played a role but their story was forgotten or never told. The whole idea was to spark that conversation where people could actually share their stories, and feel that they are not forgotten.

Josephine Opar is a Kenyan-born arts and culture writer, womanist and magazine hoarder. You can keep up with her on Twitter at @viewfinderSS.